Drones, of all shapes, sizes and configurations, are becoming a common sight on construction projects and slowly but surely are matriculating to the oil and gas pipeline sector as well.

Those involved with drone technology, and who are also familiar with oil and gas pipelines, note that we are still in the early-adopter phase. Of all the construction sectors, oil and gas, is often slow to embrace new technology.

To understand the rise of drones — also referred to as unmanned aerial vehicles (UAVs) — one needs to look at the August 2016 decision by the FAA to pass Part 107 of the Federal Aviation Regulations to legalize the use of drones for commercial purposes. The Part 107 license covers small unmanned aircraft systems (sUAS) that weigh less than 55 lbs, including everything that is onboard or attached to the drone.

The passage prompted forward thinking companies to get employees licensed or explore how drones could be implemented in daily operations. It also led to the start-up of companies that specialize in drone services.

According to a recently released study conducted by Blue Research, the construction and engineering segment has the highest adoption rate of drones. The study was conducted on behalf of Skyward, a Verizon company, which offers drone operations management and consulting. For the study, Blue Research sampled 1,736 individuals who worked at a random mix of U.S. companies with $50 million or more in revenue. The results showed that 35 percent of companies in the construction and engineering segment used drones.

A Plenitude of Uses

“Drones can be used in a variety of ways in the midstream oil and gas sector relative to transmission and distribution. The most obvious is efficient visual inspection of pipelines and vessels,” says Jason Worley, president and CEO at Asset Drone. “Other applications include utilizing special sensors, software and methods. Examples include looking for signs of a leak by examining vegetation that appears stressed, high-accuracy mapping and location of pipeline infrastructure, looking for vegetative encroachment, erosion or other concerns in hard-to-reach areas, and we are also working on some NDT testing by drone, to include material thickness testing of vessels and pipelines.”

Formed in 2017, Asset Drone is primarily a technology and information gathering business and counts drones as its main tool to gather data. Headquartered outside of Fort Worth, the company has a fleet of about 25 drones and has full-time and contract pilots available across the United States. Asset Drone’s customers include asset owners, engineering firms and contractors.

“We knew we were entering this space early in the technology adoption cycle, but it is even earlier than what we thought it was. There are a lot of entrenched providers, contractors and relationships in the oil and gas sector, and we are trying to find niches where we can make things more efficient but the relationship stays in place,” Worley says. “For instance, we’ll work with an inspection company that has been doing work for a client for 25 years, and they sub work out to us. That seems more palatable to the industry than us going directly to the end-user.”

Worley notes that while there are benefits to companies building an internal drone program, many opt to outsource the drone work for several reasons.

In addition to the risks involved with complying with FAA regulations and having proper aviation insurance, there are staffing (new employees, training existing staff, etc.), logging (flight and maintenance) and maintenance concerns (battery life cycles, props, sensors, etc.) to consider.

One early adopter that is testing the feasibility of using drones for leak detection is Heath Consultants Inc., which developed its RMLD-UAV as part of the U.S. Department of Energy’s Advanced Research Projects Agency-Energy (ARPA-E) program.

The RMLD-UAV takes a smaller version of Heath’s laser-based Remote Methane Leak Detector (RMLD), mates it to a UAV and uses it for methane leak detection.

Started in 2015, the project is a collaboration between Physical Sciences Inc. (PSI), in conjunction with Heath Consultants, Princeton University, the University of Houston and Thorlabs Quantum Electronics Inc. The drone flies a pre-programmed pattern around a facility searching for leaks and if one is detected, the drone circles the potential leak source and calculates the emission rate.

“We are performing test flights all around the United States and Canada. We’ve also flown after Hurricane Harvey in Beaumont and Port Aransas, Texas,” says Paul Wehnert, senior vice president of sales and marketing at Heath Consultants. “The drone is specifically designed for natural gas leak detection, upstream, midstream and downstream.”

While Heath’s use of the drone is focused on leak detection, Wehnert says additional uses of the technology within this sector include inspection of well sites, gas plants, compressor stations, bridge crossings and other inaccessible terrain. 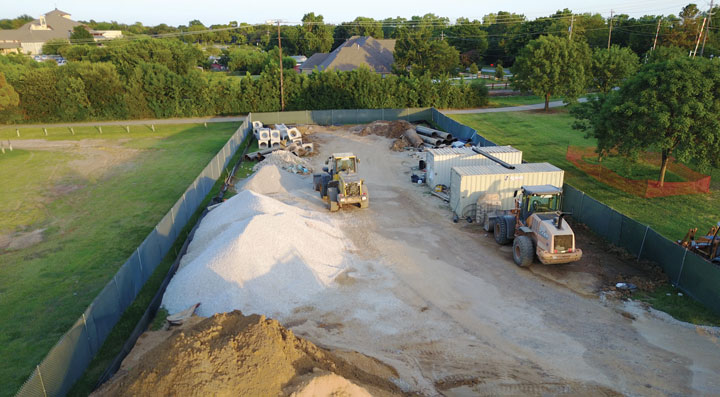 Contractors hire Asset Drone for varied tasks including site surveys before, during or after various important events.

Along the Right of Way

As a pipeline operator, Marathon Pipe Line LLC (MPL) is another early adopter of UAV technology, purchasing its first drone in 2017 and quickly growing its fleet to 13, with 18 FAA licensed pilots and five taking courses to receive the FAA Part 107 licensure. MPL’s goal is to have an sUAS and trained pilots in each of its service areas.

“In the spring of 2017, MPL purchased its first drone, a DJI Phantom 4 Pro. Our first use for the drone was to inspect flooded waterway crossings in areas where it was difficult to access on the ground,” says Karen Byers, damage prevention supervisor at MPL. “We had always used a helicopter in these situations in the past, but using a drone allowed us to have first-hand, real-time information.”

The focus for MPL remains to use the drone to inspect locations where it would be difficult or pose a safety hazard to access on foot. It is also used for project planning, pre-bid planning and emergency response. With a year of drone operation under its belt, MPL is now looking at the feasibility of using video and images to integrate with its GIS software to create 2D and 3D maps. The latest addition to the fleet is a SwellPro SplashDrone, a waterproof drone that can be put to use in hurricane and other wet weather-related events.

One of the biggest advantages Byers has seen thus far is having quick access to data that was not available to the company in the past. For instance, during flood situations, areas would become inaccessible. Now, with a drone, MPL’s crews can fly over the area and accurately assess the environmental conditions that exist.

“In order for us to be competitive as a company we must find new ways of doing business across all aspects of our operation. Drones are certainly no small part of this,” she says. “We are constantly exploring where we can integrate drones into our day-to-day operations.”

One year of use did not return enough quantifiable data, but Byers believes that MPL will start seeing a cost savings by using this new aerial technology. One of these potential areas of cost-savings is expedience. Drones give the crews access to imagery onsite in nearly real time, instead of having to wait for it to be returned when using a helicopter or an airplane. There is a safety aspect of not putting an employee in harm’s way to gather data over difficult terrain. A safer project almost always equates to a more profitable project.

The formation of Asset Drone and MPL’s first drone purchase are two of many examples of drone technology gaining prominence following the FAA ruling. Another example, announced at CONEXPO-CON/AGG 2017, was a strategic alliance between John Deere and Kespry. The alliance opened up John Deere dealerships as sales points for Kespry’s drone technology.

“Deere has a portfolio of solutions that includes, telematics, grade control systems, payload weighing and several other elements of technology that help our customers get done what they need to get done every day and track their progress,” says Andrew Kahler, product marketing manager, John Deere WorkSight. “We wanted to add drone technology to that portfolio.”

Unlike the Asset Drone technology, which can be customized to suit a client’s specific needs from site imagery and topography to the addition of sensors for a bevy of data acquisition tasks, the John Deere solution is solely focused on jobsite data acquisition.

Customers can use the drone to measure topography, measure productivity, verify work and locate assets. Along the pipeline right of way this can be useful for equipment route planning, assessing the amount of brush cleared or trench dug, amount of right of way restored and equipment locating.

“Our drones operate within line of sight and can quickly capture sites up to 500 acres,” says Kahler. “What a drone can see from the air is sometimes very different that what a person can see standing on the ground.”
Because of the potential for a broad swath of prospective users, John Deere had to find a solution that was easy to use and operate. The flight plan is created via an iPad where the operator defines the capture area and flight height. They hit the take-off button and the drone flies the area on its own. After the pre-programmed flight is complete, the drone lands and the data transfer, for post processing, begins.
Customers can visit a John Deere dealer and sign up for a one-year lease of the Kespry drone. That lease includes the drone, flight software, post-flight processing and access to the Kespry cloud, where the processed information is stored and tools are available for analysis. Because the Kespry system was designed by Kespry from beginning to end, customers have a one-stop shop for customer support. Kahler reports that Kespry has a high renewal rate on its leases.

“The drone technology is being used because of the speed of the data acquisition. If there was a faster way to get the data to a customer we would be talking about that,” Kahler says. “At this point drones are the fastest way to obtain jobsite data. I would foresee, depending on the market, adoption increasing, as more and more people realize the benefits of this technology.” 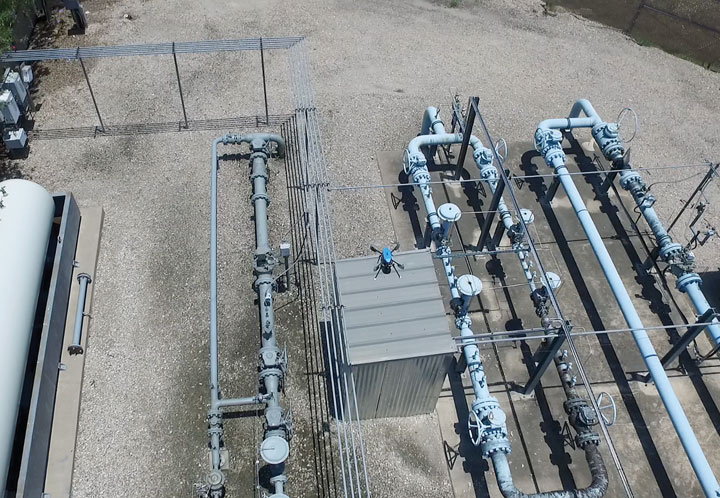 Heath Consultants is testing the feasibility of leak detection via drone using its RMLD-UAV.

Speaking to the speed of data acquisition, Kahler explains that, in an industry that is constantly facing worker shortages, using a drone to collect topographic data can be done in minutes. A survey crew would have to be booked and then it could take them two to three days to collect similar data. And the data collected by the Kespry drone will be accurate to within 2 to 5 cm, a range that is on par with a traditional survey crew.

As with any tool in the construction industry toolbox, drones are not a miracle solution but just one tool. There are still many restrictions to where drones can fly, including over people, within restricted airspace and beyond visual line of site. Waivers are available for some of these hurdles, but getting those approved could be time consuming, eating up any potential cost-savings.

“There are a lot of viable and entrenched methods and techniques that will resist augmentation or replacement by drone technology, but ultimately, in many specific use-cases, the risk mitigation and efficiency of the drone platforms will make it a no-brainer for most operators,” says Worley. “The oil and gas and construction industries still have to shake that balance out. Where it makes sense to use a drone/sensor package, and where traditional means are still the best.”