One of the challenges for any new company is how to put capital equipment in place to get that very first job done.

Kim Ozalas, owner and operator of KO Pipeline, was no different as her company embarked on its first project in 2014. Based out of Cambridge, Ohio, KO Pipeline has kept busy in its first two seasons of work — and much of the steel and horsepower required to get the job done has come from Todd Clipner and Southeastern Equipment (also headquartered in Cambridge).

“When I came to Cambridge to start my first jobs here, I didn’t even have a shovel,” Ozalas says. “Southeastern let our people come down, get on the machines, adjusting the equipment to the operator. [Input from the] Case rep is common.

Sitting down with them, talking with them, getting their ideas. It really gives people buy-in. When you get buy-in, then it all works out.”

The working relationship between KO Pipeline and Southeastern Equipment was recently on display on a 12-in. natural gas gathering line near Barnsville, Ohio. KO Pipeline installed a mile of that line, with the Case 2050M dozer making the initial cut and the new CX350D excavator digging the trench. Two Case CX350C excavators and the 2050M dozer completed backfilling and final grade. 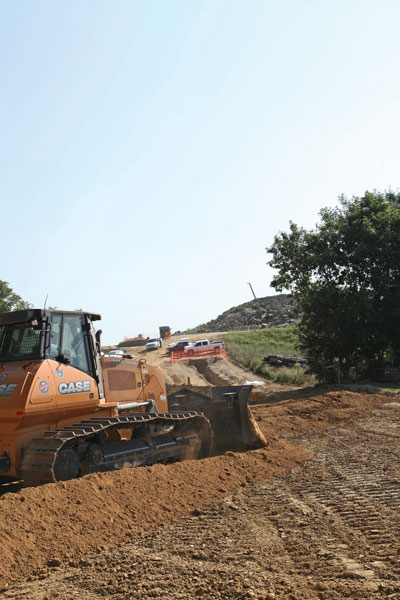 The CASE 2050M dozer performed backfill and grading duties on a 12-in. natural gas pipeline project in Barnsville, Ohio.

While KO Pipeline is a newer company, Ozalas has an extensive pipeline and engineering background, and she’s built an experienced team of supervisors, foremen and operators around her.

“Nobody that we have is new to the game,” she says. “Our asset is our people. In our top five people within KO Pipeline, there’s more than 100 years of experience.”

That includes superintendent Nicky Jordan, foreman Allen Eason and operators George Hardaway and Josh Wilson.
Hardaway was one of the first operators to break ground on KO Pipeline’s leg of the project by making the original cut into the right of way with the 2050M dozer.

“It’s incredible. There’s no stalling,” Hardaway says. “You get it at a steady push with no track slippage. It’s awesome. Like a lot of the older dozers I used to run would stall out if I got a load like the ones I get with this machine.”

Another benefit to Hardaway are the control customizations that allow the operator to tailor machine performance exactly to the jobsite conditions, including the ability to independently set blade sensitivity, steering sensitivity and shuttle (forward to reverse) sensitivity to smooth, moderate or aggressive.

“When the machine first came out, all the settings were set on aggressive. I just tooled it down a little bit to my preference,” he says.

Hardaway keeps his shuttle at aggressive, alternates steering between moderate and aggressive, and put his blade control on moderate because, in his opinion, a fast blade doesn’t work as well in the soils encountered on this project.

“Some material you work in, like thick clay for instance, if your blade is too quick, it will suck it in the ground,” he says. “If it’s just gradual, it works a lot better. I’m set on moderate, and I can run it like that forever.”

“It’s a good pusher, and I’ve got a long way to push,” Hardaway says. “I want to get back and make another cut pretty quick.”

Hardaway then adjusts steering sensitivity based on conditions.

“We’re coming off our cutting at 45 degrees across the right of way. Sometimes you have to be quick with it, but most times it’s a gradual turn to spill your dirt. It’s not [as aggressive].

“A lot of the older tractors, if you didn’t like it, you just had to deal with it. This one, you can set it to your liking. That is a big deal.”

The 2050M also features the first selective catalytic reduction (SCR) technology built into a dozer, which contributes to fuel savings of up to 14 percent. SCR is well suited for bulldozing because it lets the engine run at peak performance without compromising power or drawbar pull.

Hardaway noticed how fuel-efficient the new dozer was compared to other machines he had run in the past.

“It’s definitely good on fuel,” he says. “Compared to the [other dozer] I was running, it is very fuel efficient, especially considering the amount of loads and how much dirt I push in a day’s time. I liked everything about it, right from the start. Being able to tweak the machine to your specs, and the power surprised me a lot. Not only the power, but the finesse.”

KO Pipeline put an all-new CX350D excavator on the project to dig the trench, which was 48 in. wide and ranged from 6 to 11 ft deep, depending on location.

The CX350D offers faster cycle times and smoother operation as the result of a new, electronically controlled pump, a larger control valve and multiple sensors. These features combine with the Case Intelligent Hydraulic System and its four integrated control systems to make the best use of the machine’s hydraulic power and momentum, resulting in added strength and fuel efficiency.

That speed was important to Josh Wilson, who praised the machine for its ability to move dirt faster.

“This new machine is probably 20 to 30 percent faster than other machines I’ve ran,” Wilson says. “It’s one of the quickest. It’s a good smooth machine. You aren’t jerking around. You aren’t bouncing around in there.”

At 268 hp and a bucket digging force of 51,639 lbf, the CX350D delivers the power needed to transition through different soil conditions in the trench.

Another hallmark of the CX350D is the ability to improve fuel efficiency — by as much as 14 percent — over previous models. This is accomplished by leveraging the hydraulic system for efficient operation and the availability of three working modes (Speed Priority, Heavy and Automatic) that allow the operator to match output to conditions.

“The most I’ve ever burned in a 12-hour day was around a quarter of a tank,” Wilson says. “In other machines, we’re burning close to half.”

Overall, Ozalas has been impressed with the experience of working with Southeastern Equipment and Case.

“The excavators are faster than any excavator my operators have ever been on,” she says. “They will come out and they’ll adjust them to their specific style. It’s faster, but it’s also tailored to what they need or what they like, their preferences.” 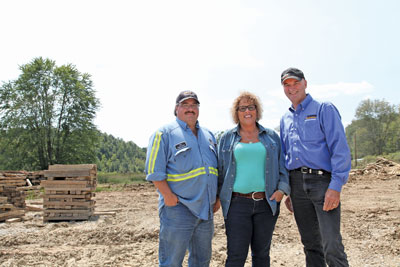 Blazing a Trail in a Male-Dominated Business

KO Pipeline is a woman-owned business. That may surprise some due to the male-dominated face of the oil and gas industry, but company owner Kim Ozalas holds her own.

“It’s like, ‘Oh, your husband is into this.’ Or, ‘Do you and your husband own this company?’ There is always a reason why I would have a pipeline company, other than that the fact that I just really like it and I’ve been doing it for a long time.”

Ozalas began her career working for an architectural and engineering firm, sitting in on the construction side of projects, making sure contractors were following specifications, reviewing contracts and other duties. One day, she was asked to work pipeline. She learned the business quickly and fell in love with it.

“Within two weeks, I was like a duck to water. I just loved it. I wouldn’t do anything else,” she says. “I love it, and it’s a good fit. I’ve worked for many contractors and I just decided that I was going to do it on my own.”

Soon, she moved from West Virginia to Cambridge, Ohio, and started KO Pipeline — a tight-knit company of 30 employees, whom Ozalas credits as one of the biggest assets to their success.

“This is what I love,” she says. “It’s something I enjoy. I enjoy the work. I enjoy watching the work. The relationship building and bidding. It’s different from any other industry.”