Inspection technology has evolved, so too has the view of pipeline integrity management to the point where today’s asset managers are craving better, more in-depth data sets.

One of the companies at the forefront of bringing these in-depth, high-resolution data sets to pipeline owners is NDT Global. The multi-national company headquartered in Dublin, Ireland specializes in both ultrasonic and magnetic flux leakage (MFL) inspection methods and operates in the North American market via three offices — a United States headquarters in Houston, a Canadian headquarters in Nisku, Alberta, and throughout Latin America via an office in Mexico City, Mexico.

Jack Angel, CEO of NDT Global’s U.S. operations came to the company about a year ago but spent 35 years in the oilfield services industry. According to Angel, when NDT Global started in Germany in 2000 (as NDT Systems and Services) the 27 engineers that founded the company were focused on providing integrity assessments for not only pipelines but all static metals, such as railway ties and tanks.

Out of that experience, over the years, it continued to establish itself as a technology development organization by providing high quality, highly accurate, high-resolution measurements about the integrity assessments and data acquisition, looking at very minute defects, which Angel refers to as “features,” in the metal.

NDT Global’s solutions can detect geometric flaws and anomalies in the pipeline, including corrosion, gouging, metal loss, axial and circumferential cracks. Reports include, among other things, operational data of the inspection, maximum allowable operating pressure and detailed descriptions and diagrams of all anomalies.

The focus for the first two years was inspection via ultrasonic measurements, which offer direct data on a pipeline’s features. To complement its ultrasonic offerings and broaden its inspection services portfolio, NDT Systems and Services partnered with National Oilwell Varco’s Tuboscope Pipeline Services (TPS) to offer an MFL solution.

“The idea is that you try to identify areas of weakness or likely areas of future failures in order to address those areas before anything bad happens,” Angel says. “Very quickly, from 2000 to 2008, we really saw a lot more pull from the marketplace for inline inspection or dynamic measurements.”

In 2008, NDT acquired TPS, and brought it under the NDT umbrella, while February 2015 marked the 50th anniversary of TPS running its first inline inspection tool.

With support from the marketplace, NDT continued to grow while maintaining its focus on high-tech solutions for the asset management industry. Four years later, NDT expanded into Russia and Asia after being purchased by Germany-based Weissker Group and in 2014, NDT Systems and Services reflected its global growth with a name change to NDT Global. Stateside, 2014 also brought the move to a new 60,000-sq-ft office in Houston near George Bush Intercontinental Airport.

Today, NDT Global boasts 590 employees worldwide, of which 140 are engineers. The company now is solely focused on oil, gas and refined products pipeline integrity management. In addition, the company remains intent on bringing the next generation of ultrasonic and MFL inspection systems to
the marketplace.

Driving NDT Global forward is an adherence to eight core values — innovation, transparency, tailor made, process driven, speed, pipeline performance, precision and reliability — there is no order and the values are represented on the NDT Global website as a circle. Angel would also add safety, which is the No. 1 goal and a prerequisite of the oil and gas industry.

“We have an internal catch phrase that we’ve now brought to the market, we call it ‘Inspection Intelligence.’ The whole idea is we use the right technologies to identify specific features in a pipeline that a customer has interest in or some concerns over. We use the absolute latest technology to do so,” Angel says. “There is no start or finish to it. These core components support this whole concept of being technology focused and us reinvesting back into the performance of our technology.”

This use of technology, having the fanciest tools, adhering to its core values, means nothing if the final report doesn’t meet the clients needs. It is that report that pipeline operators are after and where the operators receive information about possible areas of concern and the severity of those features.

The total length of an inspection project varies and is dependent on the technology used, length of the pipeline section, diameter and the volume of data received. About 10 years ago, report times ranged from 120 to 150 days. For a similar pipeline, NDT Global’s times vary from 60 to 90 days, and in many cases, these delivery times can be improved without any compromise in quality. 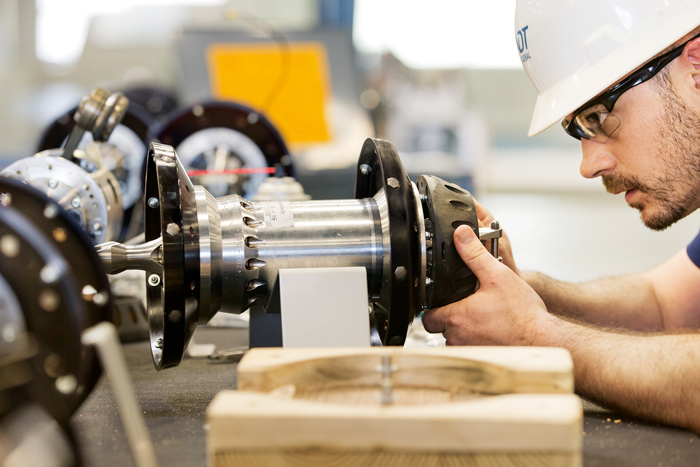 An NDT Global employee prepares an ultrasonic inspection tool for a project.
NDT Global’s tools are designed specific to each project and it’s this pre-planning that results in some of the industry’s best first-run rates.

Ensuring the report is comprehensive requires an exhaustive upfront planning phase that involves a collaborative effort with the pipeline operator to identify pipeline characteristics, assess previous inspection data and determine what data the operator wants to find out.

The preliminary work allows NDT Global’s engineers to build the right-sized inspection tool with the proper sensors and positioning those sensors in such a way that the scan returns the highest resolution results. It also takes into consideration the number of batteries an inspection device needs and if the project will require multiple passes. Engineers look at, among other things, the density of the fluid, the wall thickness of the material, the type of material and the temperature of the line, to optimize the signal to get the best resolution and minimize the likelihood of a bad report. This focus on pre-planning leads to what Angel characterizes as some of the industry’s best first-run success rates.

“The whole idea is to just do things right the first time,” Angel says. “We continue to lead the industry in this area, and we are proud of our performance. We have a 92 percent global first-run success rate and in the U.S. it’s just over 94 percent, and we continue to get better.”

This is important in an industry where inspection hiccups could lead to downtime for the line and money lost for the operator. NDT Global’s goal is to one day achieve a 100 percent first-run success rate.

In the United States, much of NDT’s inspection work is focused on oil transmission, distribution and gathering lines though it hopes to bring a new natural gas inspection technology to market next year that eliminates the need for running a batch or slug to complete the ultrasonic inspection.

“It really is very much around oil, water and refined products for us in the U.S.,” he explains. “We can inspect gas lines, but because of the nature of our ultrasonic measurement, we need to have a liquid medium between the sensor and the inside wall of the pipe.

“While we do inspect natural gas lines, we do what’s called a batch or a slug whereby we seal off a section of pipe and fill it with some sort of liquid medium, put the inspection tool in and seal off that section and let it go down the line with pressure. There are additional pipeline activities associated with this and some operators are reluctant to take this on. NDT Global is working hard to introduce, by next year, technologies that will allow us to deliver results with the same resolution that we have in liquid lines.”

On a recent project involving a liquefied propane line, the operator had questions about whether NDT Global could return the required resolution of data compared to a diesel line.

“That took a lot of upfront evaluation and involved bringing in our engineering group out of Germany to do some significant testing which included flow loop verifications to optimize our sensors. Our confidence was unwavering in that we could do this,” Angel says. “We weren’t going to know until we were in the field. This was all in the last year and we now do this routinely, safely and successfully.”

Take this can-do confidence and add improved technologies, automation and a younger generation of asset managers, and Angel sees a bright future for the pipeline inspection industry and NDT Global as a whole. Historically, many pipeline operators would question the need for an inline inspection program and a new generation of operators is asking themselves, “Why wouldn’t we have a program?”

In the last 10 years, pipeline operator mentality has shifted across the board, they are extremely conscientious and focused on acquiring this data to not only to comply with federal regulations but for environmental protection, integrity of the pipeline and extending the life of that pipeline.
“While there was always a responsible attitude to the transport reliability, it has increased as these technologies have allowed a higher level of understanding for those pipeline operators,” Angel says. “This next generation of professionals, now that they have really been in the industry over the last 10 years, they are of a mindset of managing their assets with data. They are embracing this idea of acquiring the data.” 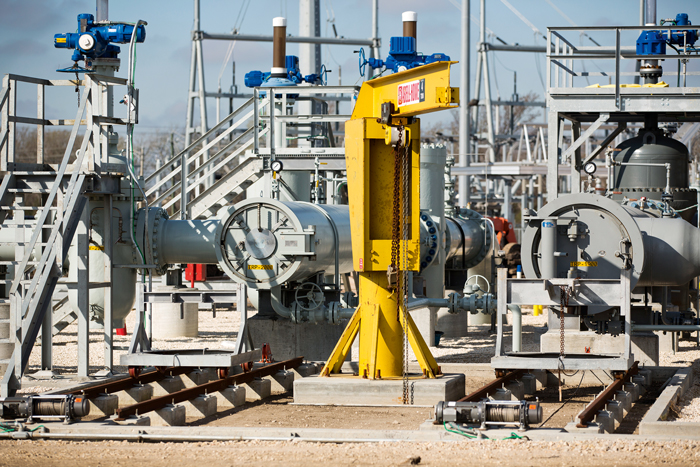 As resolution, speed, accuracy and confidence levels grow, Angel expects to see a decrease in the amount of hydro-testing a pipeline operator requests. The process of pressurizing a pipeline to find leaks is tried and true but the downfall is that it could be destructive to a pipeline that already has defects.

“Everyone did understand the short-comings that hydro-testing had in that it could very well be fatiguing the line in areas that it was not already fatigued and ultimately reducing the maximum allowable operating pressure and costing operators money,” Angel says. “We are not there yet but there certainly is a reduction in the amount of hydro testing that is directly related to the credibility we are seeing from the inline inspection technologies.”

In the next three to five years, Angel believes the advances in technology — from the sensors to the packaging to the hybridization of electronics — will continue much faster than what the industry has seen in the last 10 years. The professionals will continue to evolve with the technologies to be more disciplined and focused on project management and data analysis.

Just like other technology companies, NDT Global continues to evolve and pay attention to developments not only from its competitors but in other fields as well. More than anything else, Angel says NDT Global is focused on providing for its customers’ increasing requirements via investments in next generation technologies. This is something that excites this industry veteran.

“I can say, that over the next two years, you will continue to see some innovative and breakthrough technologies from NDT Global that we have been working on for some time now,” Angel says. “Field trials have been taking place in other parts of the world and we are very enthused and anxious to introduce those to the markets here in the U.S. and Canada.”

Mike Kezdi is an assistant editor at Benjamin Media Inc. and a contributing staff editor of North American Oil & Gas Pipelines. Contact him at  mkezdi@benjaminmedia.com.