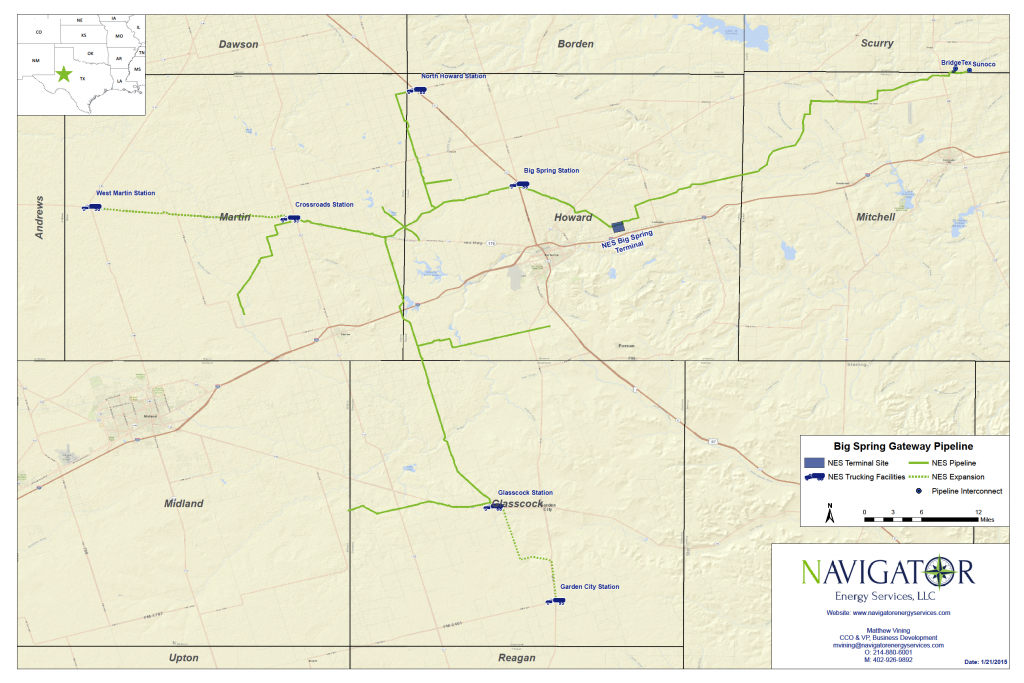 The Navigator Energy Services BSG System will serve crude oil producers and other shippers in the Permian Basin and will span Martin, Howard, Glasscock and Midland counties in Texas.

Based on binding capacity bids received from prospective shippers, Navigator Energy Services has executed long-term transportation service agreements and is pursuing expansion of the BSG System by 65,000 barrels of crude oil per day (bbl/d) to a total capacity of 140,000 bbl/d.

Navigator has commenced construction, and the first portion of the BSG System is expected to be placed into service early in third quarter of 2015.

Navigator Energy Services will have the capability to deliver up to 100,000 bbl/d of crude oil to the refinery and is the only gathering system of its kind and scope to connect into the facility. The Big Spring Refinery, located in Big Spring, Texas, has an aggregate crude oil throughput capacity of approximately 73,000 bbl/d and processes 100 percent Permian Basin crudes.

“Despite the recent downturn in commodity prices, the continued demand for low cost crude transportation solutions with multimarket access is what drove this offering. The customer response and ultimate completion of the BSG expansion project materially expands the BSG System’s ability to serve the continued volume growth of the North Midland Basin,” said Matt Vining, Navigator Energy Services’ chief commercial officer. “We are thrilled with the Alon relationship as it gives our customers direct access to a strong local market and further complements the suite of market options now available on the BSG System. The BSG System will have over 350,000 bbl/d of deliverability into four different markets via interconnects with BridgeTex, West Texas Gulf Pipeline, Permian Express 2 and delivery into Alon’s facility.”

The BSG System will serve crude oil producers and other shippers in the Permian Basin and will span Martin, Howard, Glasscock and Midland counties in Texas. Currently, the system is expected to include more than 250 miles of gathering pipeline, 200 miles of transportation mainline and 425,000 barrels of expanded third-party and operational storage capacity.

In addition to the Alon Big Spring Refinery connection, under its FERC tariff, the BSG System will offer delivery into the BridgeTex Pipeline and Sunoco-operated pipelines West Texas Gulf Pipeline and Permian Express 2. The BSG System will provide West Texas producers a direct path to approximately 950,000 bbl/d of pipeline takeaway from Colorado City to Texas Gulf Coast and Mid-Continent market centers.

“We believe that the BSG System will be of tremendous benefit to producers in the Permian Basin,” said Alan Moret, Alon’s senior vice president of supply. “The connection to our Big Spring Refinery provides greatly improved access to an essential local market and we look forward to working with producers and shippers on the BSG System.”