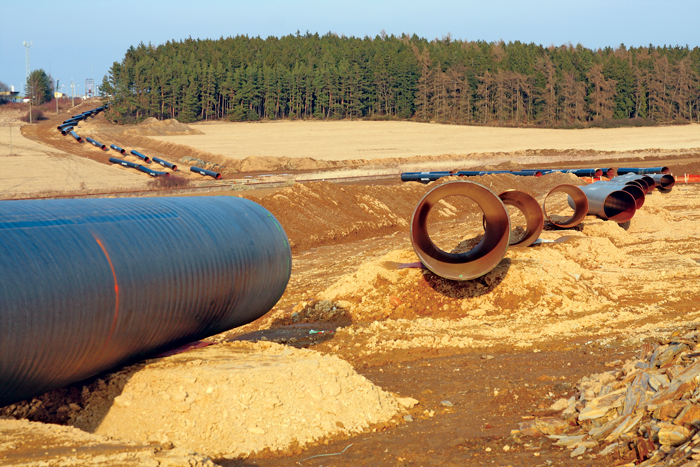 As shale gas development continues to boom in the United States, prospects to the north seem to be stalling amid low natural gas prices in Canada. However, several pipeline and storage facilities projects are on the books to meet demand for more transportation capacity throughout the provinces.

The Canadian National Energy Board (NEB) released its “Short Term Natural Gas Deliverability 2013-2015” in May. This market assessment indicated that Canadian natural gas producers are undertaking minimal natural gas drilling activity as current prices do not cover the full costs of developing most natural gas prospects.

1. Minimal drilling activity because prices do not cover the costs of developing most natural gas prospects.
2. Growth in natural gas as a byproduct from developing oil and natural gas liquids (NGL) rich prospects.
3. Producers are not earning sufficient returns to attract additional equity investment with current prices of around $3/MMBtu in western Canada.

Furthermore, the report indicates that the addition of pipeline capacity to deliver shale gas from the Marcellus shale region is bringing forth additional deliverability into an already fully supplied North American market, displacing Canadian natural gas exports in the Northeast U.S. and some domestic sales in central Canada. Further displacement of Canadian natural gas could occur due to the developing Utica shale in Ohio.
Due to lengthy project development timelines, the NEB determined that significant liquefied natural gas (LNG) exports from North America are unlikely through the 2015 time horizon of its analysis. LNG exports are therefore not expected to influence gas prices and gas drilling over the study period.
Despite these dower prospects, pipeline companies are still busy developing a number of projects, which have already begun construction or are awaiting regulatory approval. What follows is an overview of many of the natural gas pipeline projects currently under way or in the permitting process.

Coastal GasLink Pipeline Project
Location: British Columbia
Stakeholder(s): TransCanada Corp., Shell Canada Ltd., LNG Canada
Overview: Coastal GasLink Pipeline Ltd. proposes to build an approximately 650-km pipeline from the Dawson Creek area to the British Columbia coastline. The pipeline will transport natural gas to the proposed LNG Canada facility near Kitimat. The Project study corridor was established based on a preliminary assessment of terrain, environment, social aspects and constructability, and through engagement of landowners, Aboriginal communities and the public. The proposed route for regulatory review and approval will be determined by considering Aboriginal, landowner and stakeholder input, the environment, archaeological and cultural values, land use compatibility, safety, constructability and economics. The project, which was announced in June 2012, would involve construction with 48-in. diameter pipe, in addition to the construction and operation of up to three meter stations and one compressor station. The initial capacity would be approximately 1.7 billion cubic feet per day (bcf/d). Environmental field studies began in January, in anticipation of submitting an Environmental Assessment Application in early 2014. Construction, pending all required regulatory and project approvals, is expected to begin in 2015.

Mackenzie Gas Project
Location: Northwest Territories
Stakeholder(s): TransCanada, Imperial Oil Resources, ConocoPhillips Canada, Shell Canada Ltd., ExxonMobil Canada and the Aboriginal Pipeline Group (APG).
Overview: The Mackenzie Gas Project (MGP) is a proposed 1,196-km natural gas pipeline and gas gathering system, liquids extraction, liquids pipeline and related field developments along the Mackenzie River valley of Canada’s Northwest Territories. The NEB approved a Certificate of Public Convenience and Necessity for the project in March 2011. The approval contained 264 conditions, including the requirement to file an updated cost estimate and report on the decision to construct by the end of 2013 and that construction must commence by December 2015. The project proponents continue to monitor ways to move the project forward, but so far natural gas market conditions do not signal a commercially viable opportunity. The stakeholders have reduced spending on the project to a minimum, but are seeking a solution to allow project activities to be restarted in the future. If development of the project ultimately goes ahead, it would result in a pipeline being constructed from Inuvik, Northwest Territories, to the northern border of Alberta, where it would connect to TransCanada’s system.

NEXUS Gas Transmission Project
Location: Ontario
Stakeholder(s): Enbridge,
Spectra Energy and DTE Energy
Overview: The proposed NEXUS Gas Transmission Project (NGT) is a joint venture among Enbridge, Spectra Energy and DTE Energy and is being developed to support the growing demand for natural gas in the upper U.S. Midwest and eastern Canadian regions. With a decline in western Canadian natural gas supplies to these regions, the proposed NGT system is designed to transport at least 1 bcf/d of growing supplies of Ohio Utica shale gas to the high-demand markets in Ohio, Michigan and Ontario, Canada. The proposed path for NGT will consist of a newly constructed, greenfield pipeline that will extend approximately 250 miles from receipt points in eastern Ohio to interconnects with the existing pipeline grid in southeastern Michigan.  As proposed, the path will utilize both existing and expansion capacity on the interstate pipeline system owned by Vector Pipeline LP to access the Dawn Hub in Ontario and the Enbridge Tecumseh storage facility. The NGT system is targeted to be in service as early as November 2016, depending on final market demand, commitments and necessary regulatory approvals. The project must obtain regulatory authorizations from the U.S. Federal Energy Regulatory Commission (FERC) and the NEB, as well as other Canadian agencies.

Niagara Link Gas Storage
Location: Ontario
Stakeholder(s): Enbridge Inc.
Overview: Enbridge is conducting an open season to assess the feasibility of developing incremental gas storage capacity and services at its Enbridge Gas Distribution’s (EGD) Tecumseh storage facility located near the Dawn Hub in Ontario. The proposed project would also include the development of incremental gas transportation capacity between Tecumseh and Dawn, as well as offering incremental, seamless, single transporter service between Corunna and Dawn via an extension to the existing Niagara Gas Link Pipeline. Enbridge has a range of storage and transportation development options which can be put into place in a timely basis to take advantage of market opportunities such as U.S. shale gas and gas fired generation. Enbridge will determine the overall need for incremental capacity and associated facilities required, based upon market demand for services. The proposed in-service date for the project is Nov. 1.

North Montney Extension Project
Location: British Columbia
Stakeholder(s): NOVA Gas Transmission Ltd. (NGTL), a subsidiary of TransCanada Corp.
Overview: The proposed $1.5 billion North Montney Mainline will be a large-diameter extension from the existing Groundbirch Mainline section of the NGTL system in northeast British Columbia. The project will consist of two sections, Aitken Creek and Kahta, totaling approximately 305 km in length and will include associated metering facilities, valve sites and possible compression facilities. The project will also include an interconnection with TransCanada’s proposed Prince Rupert Gas Transmission (PRGT) project to provide natural gas supply to the proposed Pacific NorthWest LNG export facility near Prince Rupert, British Columbia. Pending necessary regulatory approval, NGTL expects the Aitken Creek section to be operational in the second quarter of 2016, the Kahta section in the second quarter of 2017 and the export delivery facilities in 2019.

Parkway Project
Location: Ontario
Stakeholder(s): TransCanada
Overview: TransCanada recently received NEB approval to construct the Eastern Mainline Expansion Project, which includes the 12.9-km Parkway Pipeline. The Parkway project will consist of a 42-in. diameter pipeline that parallels, in two separate sections, a portion of the existing TransCanada Mainline in the cities of Brampton and Vaughan, Ontario. The project will also include minor system modifications at various TransCanada facility sites throughout southern Ontario. The Parkway Pipeline will increase capacity on TransCanada’s natural gas transmission system providing the markets in the Greater Toronto Area (GTA) and Central Southern Ontario with additional natural gas supply. This increased capacity will provide for the commercial commitments of supplying Marcellus shale gas to these markets. The pipeline will be constructed along TransCanada’s existing right of way to reduce environmental effects and minimizing disruption to nearby residents and landowners. In January, contractors completed horizontal directional drilling to cross the Credit River, with tie-in completed later in the spring. Cleanup and reclamation of the jobsite is ongoing to restore the land to its previous condition.

Prince Rupert Gas Transmission Project
Location: British Columbia
Stakeholder(s): Progress Energy Canada Ltd., TransCanada
Overview: In January 2013, TransCanada was selected by Progress Energy to design, build, own and operate an approximately 750-km natural gas pipeline in northern British Columbia. If approved, the Prince Rupert Gas Transmission (PRGT) project will deliver natural gas from a point near the District of Hudson’s Hope to the proposed Pacific Northwest LNG facility on Lelu Island, within the District of Port Edward. A conceptual corridor (an initial draft of the pipeline route) has been created for discussion and planning purposes. Input from Aboriginal groups and stakeholders, such as landowners, local communities and government, will help shape the final route. The final route will also reflect the terrain, environment, constructability and economics of the project. Environmental and engineering studies began in June, with an environmental assessment application expected to be submitted in early 2014. Construction is scheduled to begin in 2015, with the pipeline in service in 2018.

Spectra Energy/BG Group Natural Gas Transportation System
Location: British Columbia
Stakeholder(s): Spectra Energy, BG Group
Overview: The proposed project from northeastern British Columbia to Prince Rupert, British Columbia, would include approximately 850 km of pipeline with a capacity of up to 4.2 bcf/d. The project will provide the required natural gas transportation capacity to meet the demands of a proposed LNG terminal on British Columbia’s coastline, in keeping with the provincial government’s Jobs Plan and its goal of establishing LNG facilities by 2020. The project also will connect with the Spectra Energy system at Station 2 (southwest of Fort St. John), a growing natural gas hub that collects supply from multiple areas of the province and other supply basins in Western Canada. The project is expected to be in service by 2019.

Spectra Energy’s pipeline system is well positioned for future growth based on customer need and timing.  A second binding pipeline open season in 2010 resulted in a further 550 MMcf/d committed under long term demand-based arrangements supporting a further expansion of the T-North system, which is currently underway.

This is not a comprehensive list of the pipeline projects for the upcoming construction season. For updates regarding ongoing projects, refer to the Project Roundup on page 14 and published each issue.

North American Oil & Gas Pipelines will provide a report on U.S. gas pipeline projects in the November issue. The Canadian and U.S. oil pipeline reports were published in the February and May issues, respectively.