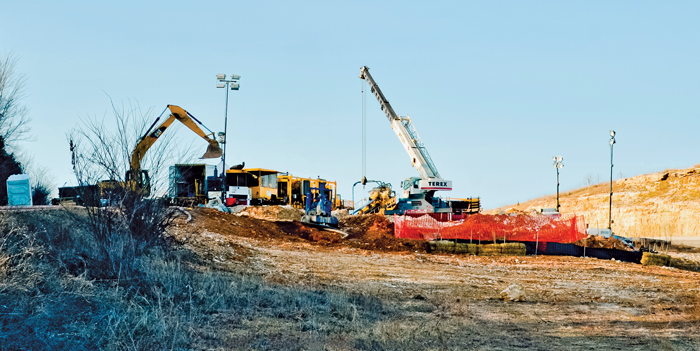 More than 30 percent of the pipeline — approximately 600,000 ft — is being installed by horizontal directional drilling technology.

For the thousands of lakeside dwellers and tourists who live and play at Missouri’s famed Lake of the Ozarks, the arrival of economical, clean-burning natural gas has been a long time coming. Hilly terrain, steep cliffs, extremely hard rock lurking just below the surface and lack of records documenting the location of existing underground utilities — all have been impediments to making the excursion.

Now, after years of trepidation about the feasibility of successfully completing a relatively short 49-mile trek from nearby Lincoln, Mo., to the Lake of the Ozarks — located about three hours southwest of St. Louis — officials with Summit Natural Gas of Missouri Inc. have decided the time to initiate the pipeline journey has arrived. Summit Natural Gas of Missouri currently serves more than 11,000 customers throughout the state; and as evident by this latest venture through the hilly, rock-laden terrain enveloping the Lake of the Ozarks, the energy leader is affirming its commitment to bring natural gas services to areas currently not served.

Four years in the making — planning, surveying, securing right-of-way acquisitions, mapping the route, hiring contractors and marketing the service to potential new customers — the Summit project  involves installing more than 2 million ft of 6-in. HDPE natural gas pipe through some of the densest rock found anywhere in the United States. When completed, this extensive pipeline network will provide natural gas to the towns of Gravois Mills, Laurie, Sunrise Beach, Camdenton, Osage Beach and Lake Ozark, Mo. 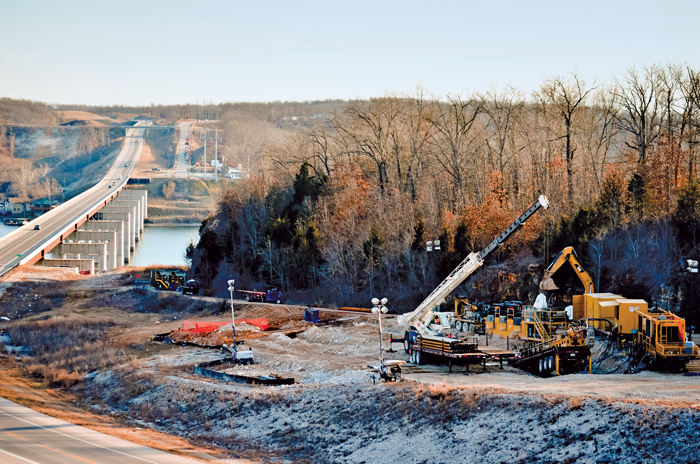 More than 30 percent of the pipeline — approximately 600,000 ft — is being installed by horizontal directional drilling (HDD) technology. The largest and most costly components of the Summit project — three trenchless bores beneath the lake at sites alongside the three major bridges in the area: the Community Bridge, Hurricane Deck and Niangua — were also the most visible and challenging. Lone Star Directional Drilling, based in Clarksville, Texas, was selected by general contractor J.F. Construction Services, based in DeWitt, Mo., to complete the bores. John Dagenhart, founding partner of Lone Star Directional Drilling and a veteran of more than 20 years with HDD work, explains the rationale for selecting the Vermeer D1000x900 Navigator horizontal directional drill for the challenging lake-crossing bores.

Highly Visible, Highly Sensitive
Dagenhart recalls the first visit he made to the lake with Jim Frock, founder of J.F. Construction Services, to survey the new Summit project installation route. Among the many objectives of the trip was to identify launch sites with enough area to accommodate the drill and various support equipment necessary for completing the three lake crossings as specified in the drill plan. 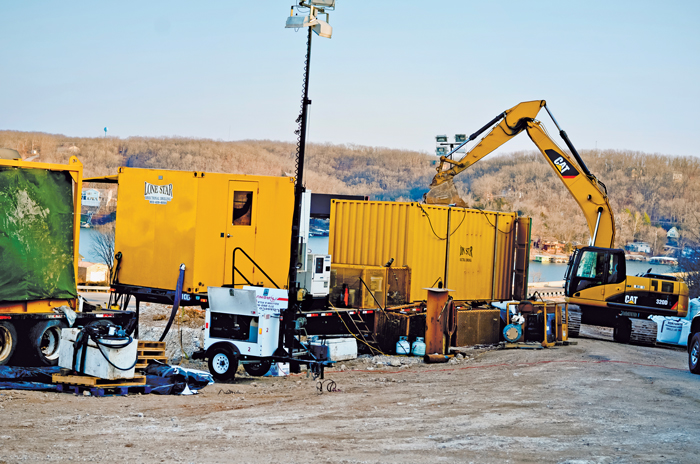 Lone Star Directional Drilling was called in to execute three bores to install a natural gas pipeline to serve the scenic Lake of the Ozarks in Missouri. The three bores ranged from 3,500 to 6,000 ft in environmentally sensitive area.

“Finding launch sites with enough flat area in close proximity to where we’d be drilling was a challenge,” Dagenhart says. “There are few areas of flat space desired for launch sites because the steep terrain is prevalent right up to the lake’s edge. All three bores were also situated near or alongside bridges, where the depth of the water averages from 90 ft to more than 100 ft. Since we were required to maintain a 40-ft clearance, the bores needed to reach a depth of 150 ft very quickly; a challenging feat given the proximity of the launch sites to the lake’s edge.”

The first bore, completed alongside the Niangua Bridge, consisted of a continuous 3,500-ft shot that took just less than a month to complete. The second was a 3,600-ft shot located near the Community Bridge. Just completed, the third and final lake crossing was a 6,000-ft bore near Hurricane Deck where, coincidentally, a new bridge was also being built.

“Construction of the new bridge, along with concerns levied by the bridge construction contractor involving the demolition of the old bridge, prompted an alteration to the tolerance,” Dagenhart says. “The specified tolerance on that bore was increased to 100 ft. As a result, the bore near the Hurricane Deck Bridge required reaching a depth of 278 ft quickly.”

A 9 7/8-in. chisel bit with tungsten carbide inserts was chosen for all three bores. “We’ve found that once we encounter rock in excess of 6,000 psi, depending on the pipe we’re installing, bits with tungsten carbide inserts will last longer,” Dagenhart says. “This was important on a bore of this length, beneath the lake, that we not have to pull back and change a worn bit before completing the shot. Experience told us this was the type of bit we needed to use.”

In addition to the limited space for establishing a launch site and strict tolerances required in the drill plan, the hard rock — much of which is fractured in gravel, cobble and some limestone — presented additional challenges for the Lone Star drill team. Given the tough conditions, Dagenhart has been pleased with the average daily production rates by the D1000x900 drill of approximately 300 ft per day. “If we can average 10 pipe joints a day, we’re very happy,” he says.

Back reams weren’t necessary on the first bore, although, on the Community Bridge crossing, where the drill plan specified 8-in. diamater steel pipe compared to the 6-in. installed on the first shot, the bore path was back-reamed once with an 18-in. hole opener.
Given the environmental sensitivity associated with this pristine lake setting, additional precautions have been implemented including the addition of secondary containments under all motors, screen mesh of specified sizes around the pump to alleviate entry by fish, and special areas for accessing water for use in the drilling process.

“We received permits to extract water from the lake, but are limited to specific access points,” Dagenhart says. “It’s all in an effort to minimize risk of something unfortunate happening that could threaten the environmental integrity of the lake; all precautions that come into play when drilling around a lake.”

An elaborate reclaiming system — with 1,000-gpm capacity — is recapturing more than 75 percent of drilling fluid presented into the bore path; a straight bentonite and water mixture Dagenhart has found to be most effective in rock-laden conditions.

“We’re reclaiming and reusing all of the drilling fluid that comes back out of the hole,” he says. “More and more water is required to build up the volume of drilling fluid as the bore progresses. Bores of these lengths require a tremendous amount of fluid, so the more we can recoup and recycle, the more efficient we are completing the shots.”

After overcoming several obstacles, and responding to unexpected challenges and unanticipated delays, the Lone Star crew has successfully completed the three highly monitored lake crossings without incident. With the recent completion of the third and final Hurricane Deck Bridge bore, Lone Star crews have begun the process of tying the pipe together and testing the gas line to prepare residents for the much-anticipated arrival of this valuable and economical energy resource to their homes and businesses. And after more than two decades in the underground pipeline business, Dagenhart admits he learns something new — or something he’s learned previously is reaffirmed — on every job.

“Be flexible,” he says. “Despite the aggravations and things I worry about every morning when making my way to a jobsite, it is nice knowing I don’t have to worry about our Vermeer drill rig. There are so many variables on every job; things that are out of our control. So, it’s good to know that I can always rely on our drills.

“In the rare event that something does go haywire, the folks with Vermeer Texas-Louisiana are always right there to take care of it. Not only is the equipment built tough, but the service they provide is second to none. It’s one of those very important things that I sometimes take for granted because I simply don’t have to worry about it.”

Randy Happel is a features writer for Two Rivers Marketing, based in Des Moines, Iowa. This article was written on behalf of Vermeer, of Pella, Iowa.