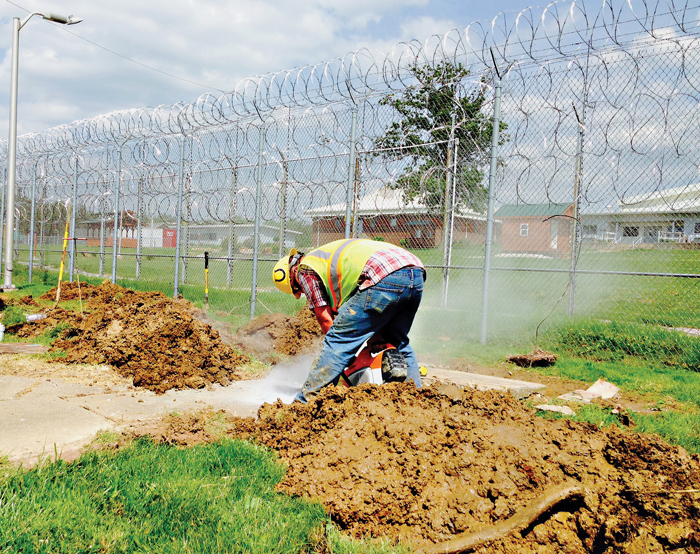 While driving along State Route 37 in southern Indiana, what appeared to be the construction of a water or sewer line was actually a new natural gas pipeline to the Indiana Department of Corrections, Branchville Facility.

Located in the extreme southern region of Indiana, the facility started out as a work camp, but has grown into a correctional facility that now holds more than 1,400 inmates. The growth of the facility created some problems with the existing infrastructure, particularly the old heating system.
The prison is unique in that one of the services it provides for the state is milling lumber to construct buildings and furniture for state parks. The scrap wood created by that process is then used as their primary heat source.

Propane was used as a backup heat source, but with the shortages experienced over the past year, along with the spike in the cost for propane, finding a way to cut expenses for the State was essential. After evaluating all the different avenues to fuel the prison, the Indiana Department of Corrections chose natural gas as the best solution.

Why Natural Gas?
The Branchville Correctional facility chose natural gas as the solution because it is reliable and cost effective. It is also seen as the “green” choice because it is the most environmentally friendly of all fossil fuels. Getting gas to the prison would require connecting to the existing distribution system owned by Ohio Valley Gas, located in the town of Tell City, Indiana. This brought an initial challenge because the location of the prison was so far from any other public infrastructure or facilities.

“Since it’s such a distance from our existing system, having this new gas line installed in Perry County opens up so many new opportunities and avenues for Ohio Valley Gas and the town,” says Derek Steen, supervisor for Ohio Valley Gas. With this challenge at hand, Ohio Valley Gas started the bidding process and Miller Pipeline was selected to install the natural gas line. 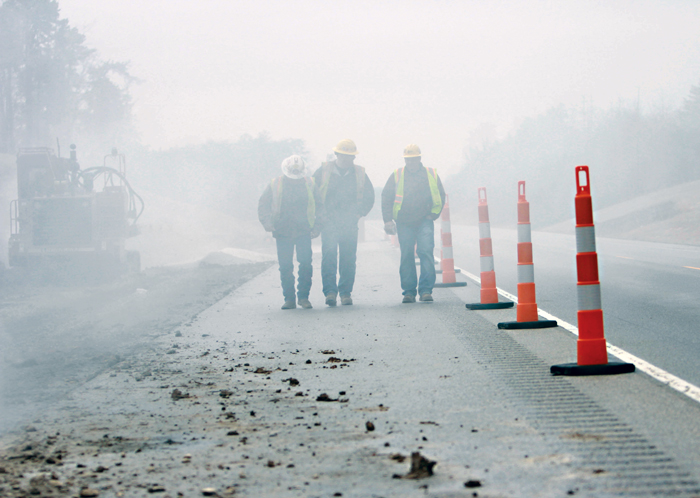 Miller Pipeline used two rock trenchers to install a gas pipeline to the Indiana Department of Corrections, Branchville Facility. The machines weighed between 60,000 and 70,000 lbs and featured high-torque ratings. When both machines were ripping through the ground along the roadside jobsite, the work area was covered in a dusty cloud.

The project consisted of 17 miles of 6-in. high-density plastic pipe, installed primarily by the open trench method with only 2 miles planned for directional drilling. Due to the length of the project and the open terrain, it was determined that using a larger track trencher would provide the daily production needed to meet the deadline.

“Our initial impression of the project was that it would be a good trench job since Perry County is open terrain; however, the project proved to be a little more challenging because there was significantly more rock than we anticipated,” says Dave Tucker, vice president of construction for Indiana at Miller Pipeline.

The overall scope of this project wasn’t unique in itself, but track trenchers aren’t typical pieces of equipment for Miller Pipeline. Because of the rocky soil conditions and the looming deadline, the company had to rent rock trenchers to cut the abrasive sand stone. To make sure the job was finished on time, two machines were used to cut ditches, a Vermeer T-655 and a Ditch Witch HT-300. Each machine weighed between 60,000 and 70,000 lbs, with high torque ratings and digging chains with hundreds of carbon tipped teeth for ripping through the rock and breaking it into small pieces. When both machines were working hard to cut through the ground along the highway, the work area was covered in a dusty cloud.

The power of the trenchers and the density of the rock created extreme wear on the trencher teeth. Quite often, all of the teeth on the digging chain would need changed at the end of the day.

“You never know what is underneath the ground in Perry County. This 5 ft is different than the next 5 ft,” Steen says. “We never envisioned this job being easy by any means however we never saw it being this hard. We are used to working on different roads within the town with existing top soil so being out in the open terrain was a different challenge for us.”

The ground was so unpredictable, some days the crew would trench more than 4,000 ft and the next day they might only get 400 ft. In total, more than 38,000 ft of rock was cut on the job.
The crew also had to install the pipe during one of the coldest winters on record for this area. According to the National Weather Service, Indiana endured its coldest winter since 1979 and had 27 in. of snow just the month of January and 55 in. for the winter.

“Regardless of the weather, we were happy to secure this project from Ohio Valley Gas because that meant keeping several of our crewmembers employed through the long, tough winter months” Tucker says.
With many days below 0 degrees and a record amount of snow, Miller Pipeline’s crew had to work right through the extreme weather, just to keep the job on schedule. Tents were built so the crew could still perform their daily tasks and fuse pipe together.

“We all should have known this winter was coming since we started the project right before Thanksgiving. Even though it was freezing, Miller Pipeline’s crews set up and prepared for the cold weather; they camped out and really toughed it through each day. I think the crews only missed about 10 days of work total, they were a hard working crew,” Steen says.

As the long winter came to an end and everything thawed out, the 17 miles of pipeline was finished near the end of March. The final piece of the project consisted of restoration and cleaning up along the highway as well as installing 3,500 ft of service pipe running directly inside the prison. Once Miller Pipeline entered the secure area to the prison, about 10 inmates helped with the project, working alongside the crews to help dig and backfill the services.

The project was finished by the original deadline date and on the last day Miller Pipeline gassed up the main. Steen reflects back about the project, “You can’t ever say you’ve seen it all because after this job, we ran into so many unique situations where we all learned some new things. However the project was completed in a timely manner and Perry County appreciates the hard work Miller Pipeline performed.”