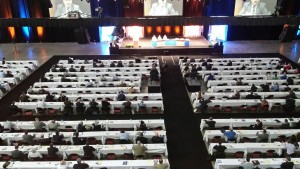 The Marcellus-Utica Midstream conference and exhibition once again setup shop in the David L. Lawrence Conference Center in Pittsburgh, Pennsylvania and the record-setting attendance speaks to the continued growth and potential in the two shale plays.

According to Hart Energy, which manages the event, the Jan. 27-29 conference attracted more than 2,100 individuals, an increase of nearly 20 percent compared to the 2014 event.

By some estimates, the Marcellus, which stretches from Pennsylvania into New York, West Virginia and Ohio is the largest and best producing play in the United States. The challenge is how can the industry get the products to market in an efficient and cost effective manner.

One of the better comments regarding the state of the plays and the importance of getting the came in the opening of John Mollenkopf’s presentation, “Operator Spotlight: The Marcellus Evolution.” The MarkWest Energy Partners COO said, “It’s really great to see so many smiling faces at an oil and gas conference when oil is selling at $45 a barrel.”

Most presentations offered the same bright outlook of continued growth for both plays, though some exhibitors were concerned that the lower cost of oil might make 2016 more difficult. The sixth annual event attracted 137 exhibitors.

The conference featured 17 technical sessions with speakers covering a wide variety of topics under the, “extending the Reach: Meeting Global Demand,” theme. This included the opening keynote, “Appalachia’s Continuing Growth,” by EnLink Midstream Partners LP CEO Barry Davis; to a regulatory and policy update focused on the congressional election and the upcoming presidential election and how it will affect the industry by John Kneiss, director of Governmental Affairs for Stratas Advisors.

A closing panel with a focus on oil and gas in Ohio with Craig O. Pierson, president of Marathon Pipe Line LLC and Scott Williams, executive vice president and chief commercial officer of Blue Racer Midstream traced Ohio’s oil producing history and what lies ahead for the state, which ranks fourth in the nation for number of wells drilled.

“It’s been exciting to see six years of success for this conference focused on the Appalachian region,” said Barry Haest, Hart Energy’s vice president of events in a news release about the event.

Hart Energy returns to the the David L. Lawrence Convention Center June 23-25, for its DUG East conference and exhibition and Jan. 26-28, 2016 for its 7th annual Marcellus-Utica Midstream conference.