Forecasting in the oil and gas industry is challenging. For the midstream companies tasked with developing and maintaining the transportation and delivery infrastructure, even minor process inefficiencies or issues can lead to major impacts to the bottom line. But in one critical area of midstream operations — lost and unaccounted for (L&U) gas — there is an opportunity for organizations to use advanced monitoring technology to better understand their energy measurement, ensure accurate calculations and as a result achieve improvement, including higher levels of consistency. 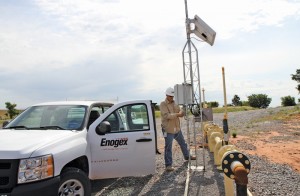 According to IDC Energy Insights, 50 percent of oil and gas companies will have advanced analytics capabilities in place by 2016. The consultancy believes analytics are one of the 10 most important issues for companies that seek emerging market opportunities and are planning for future growth.
“Rapid and radical changes in energy supply and demand require gas companies to be more agile, resilient and innovative to retain a competitive edge,” says Jill Feblowitz, vice president of IDC Energy Insights, who helped develop the set of predictions for the oil and gas industry. “These decision imperatives will help oil and gas companies focus their efforts and deploy technology wisely to meet those ends.”

Midstream companies are not immune to these challenges. To overcome them, these companies must look to better understand data and how it can inform their ongoing efforts to maintain pipelines efficiently while properly distributing and tracking the flow of product. Enogex LLC made innovation in analytics a central part of its new approach.

The story behind Enogex’s improved L&U levels started with a willingness to take a long-range view of its processes in the early 2000s. Enogex was previously a subsidiary of OGE Energy Corp. before joining CenterPoint Energy in May 2013 to form a master limited partnership, Enable Midstream. Enable Midstream is a natural gas pipeline company based in Oklahoma City that manages more than 12,000 miles of gathering pipelines and nearly 8,000 miles of interstate pipelines as part of its operation.

For Enogex, significant swings in L&U levels, specifically from the winter to summer months, initially prompted executives to audit operations. While levels were well within the 2 percent threshold the industry accepts as reasonable, Enogex’s own 12-month study of data found a difference of more than 1 percent in L&U gas levels from mid-winter to mid-summer. At its summer peak, Enogex charted L&U levels of approximately 0.85 percent, while in the winter they recorded levels closer to negative 0.4 percent. A loss or negative L&U has a financial impact in two ways — at the customer level by paying for gas not actually received, and then purchasing replacement gas on the spot market at possibly elevated prices.

The company initially struggled to understand the fluctuations, which altered the accuracy of the data that feeds into the electronic flow meter (EFM) while impacting its customer service and its ability to set appropriate transportation and fractionation rates for customers. While there were potential explanations for those fluctuations — including seasonal changes in both gas temperature and ground temperature affecting the physical characteristics of the gas — Enogex executives wanted to pinpoint the specific causes and effects of the swings to establish a precise relationship between the work performed by their field technicians and subsequent L&U gas levels.

The company engaged a third party to assess its meter sites, and this included physical meter tube inspections, review of calibration equipment and EFM configurations. The consultants concluded that Enogex’s technicians required a more thorough understanding of American Gas Association (AGA) flow rate equations. Although the introduction of electronic flow computers helped the process, Enogex and its field technicians still needed to understand flow equations so that they could conceptualize the resulting measurement numbers.

Enogex purchased a gas orifice flow (GOF) program in 2002 and installed it on the laptops of all measurement technicians. New procedures required technicians to run the program, as an independent calculation, when arriving onsite and before leaving a site after calibration. This process verified that the EFM was calculating data correctly based on AGA flow equation factors. The technicians began to understand the environmental parameters that affect the flow equation factors, as well as how those factors influence the overall L&U calculation.

Enogex began to see vast improvements. A new 12-month study, from 2006 into 2007, displayed a less than 0.7 percent swing from mid-winter to mid-summer. The data made it clear that the operation was headed in the right direction. This provided incentive to keep going: executives opted to examine the data to identify opportunities for more enhancements to their services and bottom-line benefits, and they determined that a realistic goal for overall L&U was at or around 0.2 percent.

Those expectations were met. A third study, conducted from February 2009 to February 2010, presented data showing less than a 0.2 percent swing from mid-winter to mid-summer, a significant improvement upon the 2006-2007 analysis. Goals were lowered to a conservative 0.16 percent to emphasize the importance and continued focus on the key behaviors which drive low L&U. 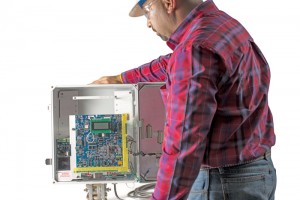 Electronic flow meters have helped Enogex to better track its lost and unaccounted gas levels, which has improved operations and revenues.

The latest generation of EFMs are designed with long-term hardware and software reliability in mind. With optimal power, accuracy and ease of use, an effectively deployed system of EFMs enhances flow measurement and enables faster calculations. But any midstream company seeking efficiency and maximization of resources must also be cognizant of their instrument durability as well. State-of-the-art EFM processors can withstand extreme environmental conditions, including 6,000 volts of lightning and temperature cycling from minus 40 C to 85 C.

The EFM is in many ways the lifeblood of a midstream company, and essentially serves as its cash register. Technicians are tasked with ensuring that customers pay for gas received at the well-head and tracking gas sold to downstream users or transporters. Even small measurement errors can equate to millions of dollars per year.

For Enogex, the AutoPILOT Pro system delivered high performance as well as peace of mind and confidence in the gathering and calculation of valuable data. Today, the system enables per-second flow calculation on up to six meter runs simultaneously, and it interfaces with both differential signal devices and linear signal devices. It also features a simplified configuration that prevents personnel from spending valuable time on set-up and programming.

Technological advancements have brought more precision and greater accuracy to applications in the oil and gas industry, and those benefits — directly or indirectly — have led to critical cost-savings and more streamlined operations for Enable Midstream. 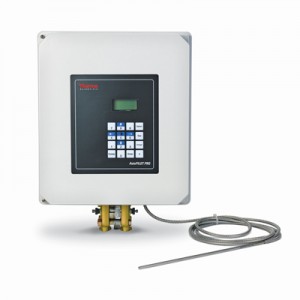 More than five years after its initial internal study, which led to standardizing on the AutoPILOT Pro, Enogex has a significant sample size with which it can assess its performance, and it is still maintaining the consistent levels of L&U gas it charted in 2009-2010. By that measure alone the program is a success.

Giving field technicians a greater role in understanding gas measurement calculations and in the decision-making process is a major reason for the success of the program. Before standardizing on the Thermo Scientific flow computer platforms, Enogex field personnel could see flow measurement statistics, but they didn’t understand where the data came from or how it impacted L&U results. Once they understood both the problem and the opportunity in the larger context, they were much more effective at helping to achieve the overall goals and objectives of the program.

Now, Enogex technicians use the information displayed by the EFMs to understand how each data point fits into an overall flow equation. Seeing the data this way lets technicians track proactively L&U levels and avoid issues before they escalate. This has led to long-lasting impacts for Enogex because now its
technicians are an integral part of a solution for efficient operations and bottom-line accountability.
The impact of having consistency in L&U levels cannot be overstated for midstream companies and their bottom

line. Maintaining low levels — and keeping them consistent through changing seasons — allow companies like Enogex to drop their rates, set up more beneficial commercial deals, and gain and retain more customers. In the case of Enogex, the success of the L&U improvements and the positive impact on commercial and financial gains can be attributed to its attractiveness as a merger candidate and the eventual formation of Enable Midstream in 2013.

To be an industry leader and enhance service to its customers, Enogex officials made the decision to take the long view, and their planning and patience paid off. A focus on improving their understanding of lost and unaccounted for gas levels came at a time when technological innovation was starting to transform the industry. The companies that adopted such innovation quickly and correctly thrived. The lesson here for others in the industry is that small problems can indeed have a major cumulative impact on operations, but if you can’t measure and analyze them you can’t fix them. Enogex recognized an opportunity to elevate its business to a new level.

The Enogex case study shows us that even the smallest of percentage gains or losses are meaningful and that attention to detail — fueled by access to and mastery of hard data — is smart business indeed.