It costs less, burns cleaner and is readily produced in North America, but the infrastructure is simply not in place to bring natural gas heat to many rural residents of Maine.

Summit Natural Gas of Maine is out to change that. They have already installed more than 130 miles of pipeline in central Maine, but that’s just the start. Over the next five years, the company plans to invest $460 million into the construction of transmission and distribution lines that will serve more than 52,000 customers in the Kennebec Valley and beyond.

Their most recent project is a 66-mile natural gas pipeline and compression station that will serve approximately 8,000 residential, commercial and industrial customers in the underserved towns of Cumberland, Falmouth and Yarmouth (CFY), along the Atlantic coast of Maine. These bedroom communities just north of Portland rely primarily on fuel oil or propane with some electric and wood-burning sources. 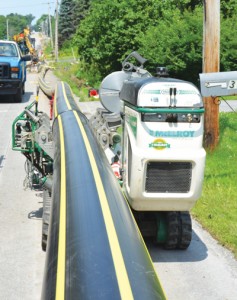 Jack and bore techniques and HDD were used to install pipe under the Royal River, railroad tracks, Interstate 295 and the scenic U.S. Route 1. In addition, pipe was fused and buried using open-trench techniques alongside narrow, two-lane roads that remained open to traffic throughout the project.

“Currently natural gas isn’t available in the communities we are building out,” says Mike Minkos, president of Summit Natural Gas of Maine. “We want to give consumers there an economic alternative.”

Summit estimates that switching to natural gas from heating oil will save residents in heating costs. Experts predict higher heating oil prices in the next few years as many of the northeastern United States, including Maine, follow New York’s lead in adopting specifications for ultra-low sulfur diesel, which is more expensive to produce.

While there are initial costs to residents associated with converting to natural gas, it offers lower prices over time. In addition, Summit is offering several rebate incentives to make conversions more feasible and affordable.

The CFY project started the second week of May 2014 and is 99 percent complete for the installation plan. So far more than 1,350 customers have signed contracts, and Summit said that number is growing every day. Over the next five years, Summit expects to have about 8,000 residential, commercial and industrial customers, and paired with the project in central Maine, Summit will have a total of more than 50,000 new customers.

Summit touts the convenience of having natural gas piped directly into the home versus an on-site tank that has to be serviced by fuel trucks. Material selection for the pipeline was one of the most important decisions that was made in order to support Mainers with natural gas for generations to come.

Minkos says that Summit selected high-density polyethylene (HDPE) for the pipeline — which is joined through heat fusion — over a steel distribution system because of its lower cost and maintenance. Pipe sizes in the application are 2, 4, 8 and 12 in., along with services lines of 1 and 0.5 in. 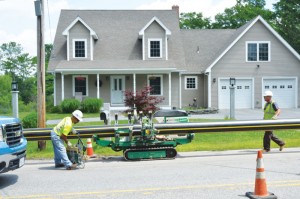 Construction crews on the CFY pipeline project used HDD to install HDPE pipe under private driveways to avoid having to cut then repair them.

On a Coastal Ledge
The CFY project is unique in that it is the closest pipeline project to the Maine shore. Laying pipeline in Maine’s coastal communities comes with its own set of challenges — namely boring through an abundance of ledge and rock.

“This is Maine,” says Michael Gagnon, CFY project manager. “If we run into ledge that we can’t drill or bore, we’ll have to use alternate methods and equipment like hydraulic hammers to break the rock and install our pipe.”

Crews so far have used jack and bore techniques to install pipe under the Amtrak Downeaster railroad tracks and have used horizontal directional drilling (HDD) at various locations under the Royal River, railroad tracks, Interstate 295 and the scenic U.S. Route 1. Priority Utility Construction is conducting the HDD portion of the project which is ongoing.

“The majority of the work is being drilled with very little impact to the environment, minimizing restoration and damage to existing landscapes,” Minkos says.

Pipe was fused and buried using open-trench techniques alongside narrow, two-lane roads that remained open to traffic throughout the project.

HDD was also in play under private driveways in an effort to avoid having to cut then repair them.

A Big Change Coming
Laying the groundwork for natural gas service in Maine brings a lifestyle to the area that simply wasn’t possible before. Heavy reliance on heating oil is truly a New England experience with more than 70 percent of Maine households using fuel oil as their primary energy source for home heating. That’s a higher share than any other state, according to the U.S. Energy Information Administration.

“Going after the gas business is a big change for the state of Maine, but it’s definitely coming,” says Gene Cote, director of sales at UPSCO. “The infrastructure has to be built out to handle the extra load.”

UPSCO and certified trainers from McElroy University conducted pipe fusion training for Cianbro’s employees who were new to the theory of butt fusion which creates a safe, leak-free joint that doesn’t corrode over its 100-year lifespan.

Project Manager Rick Bartucca of Cianbro says his crews completed four or five fusions a day when they started, but their skills progressed to the point that they were doing up to 17 fusions a day of 12-in. DR11 polyethylene pipe.

“It’s an emerging market we’re getting into,” he says. “Plastic, especially this size, is new to us, but it’s easy to work with.”

Summit had two of its own inspectors on site using McElroy’s latest model DataLogger 5 which records the heating and cooling times and other parameters of the fusion process to ensure that the joints were properly fused before the pipe was buried.

Gagnon says that Summit had also hired a third-party engineering firm to inspect all aspects of jobsite.

Cianbro had three fusion teams on site working closely with Shaw Bros. which dug the trenches and buried the pipe at a rate of about 500 to 700 ft per day.

Bartucca says that the culverts were challenging because the pipe had to be bored 2 ft beneath them and they were already 12 ft deep in rock.

“The city wanted it deeper since they plan to replace the culverts,”
he says.

Working Together
In Falmouth, authorities were in the process of their own project — burying utility lines. Gagnon says that they worked closely with contractors there when they started fusing and burying the pipeline so as not to interfere with the water and sewer mains, cable, electric and storm drains in close proximity.

“Utility locating is a huge part of this,” Gagnon says.

The new pipeline will be supplied by the Maritimes & Northeast pipeline that stretches from Goldboro, Nova Scotia, through Maine and New Hampshire to the pipeline grid in Dracut, Massachusetts. The 684-mile transmission pipeline system was built to transport natural gas from developments offshore Nova Scotia to markets in Atlantic Canada and the northeastern United States.

A compressor station was built near the Cumberland Fairgrounds to reduce the pressure from 1,440 to 90 psi for a safe transfer from the 30-in. steel line to the 12-in. HDPE line.

Gagnon says they were working on designs and regulatory approvals for the next phase of the CFY project beginning in the late spring of 2015 to further build out the area.

Residents can type in their address at summitnaturalgasmaine.com/
service-areas to identify service in their area.

Susan Hylton is a public relations specialist at McElroy.