A land owner in Dallas Township, Pennsylvania, is taking legal action to intervene in the Atlantic Sunrise Expansion project. A spokesperson for the landowner said Dec. 29 that Williams Cos. Inc. and Williams Partners LP are creating unnecessary delays for natural gas pipeline. 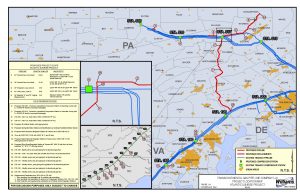 The spokesperson said the pipeline developers have taken actions that impact the so-called “Nesbitt Parcel” that are threatening cultural and environmental resources by seeking an alternate route for the project.

“An environmentally and culturally acceptable expansion route for the Atlantic Sunrise pipeline could have been finalized long ago, but the inexplicable actions of the pipeline developer has chosen a route that will ultimately result in a highly contested fight and delaying construction of the project even longer,” said attorney Carolyn Elefant on behalf of Geraldine Nesbitt, an impacted landowner and intervenor in the project.

The Atlantic Sunrise Pipeline is currently under review by the Federal Energy Regulatory Commission (FERC) and the United States Army Corps of Engineers (USACE).

Elefant added that Williams is “compromising the project by proposing a pipeline route that is far inferior” to the one under federal review, alleging that the company has used “inaccurate information and questionable timing to usurp the review process.”

Nesbitt is the owner of The Nesbitt Parcel in Dallas Township. Williams has proposed enlarging and expanding the capacity of an interstate natural gas pipeline and is seeking eminent domain to impact land owned by Nesbitt.

Nesbitt has intervened as an impacted landowner to protect unique Native American and colonial cultural resources. The pipeline would ship large amounts of natural gas from wells in the Marcellus shale formations to markets in the Northeast United Statesm, as well as foreign export as liquefied natural gas (LNG).

The Nesbitt Parcel has been owned and conserved by the Nesbitt family for more than 120 years. Abram Nesbitt, a prominent businessman and philanthropist who founded the area’s first hospital in 1912, bought the first section of the current ownership in the 1890s. Eventually, 40 other parcels were purchased and added together to form the current Nesbitt Parcel.