Building and maintaining America’s more than 2.5 million miles of pipelines requires a diverse army of professionals. From welders, heavy equipment operators, truck drivers, contractors and laborers, to a vast array of supporting trades and logistics professionals, it takes a specialized workforce to keep the pipeline industry moving.

Making matters worse, young people seem reluctant to consider vocational careers, some say, because of misperceptions about skilled trades. “Young adults often see vocational jobs as a grueling line of work offering no career advancement or financial and job security,” the Post reported. “The reality is many workers in the skilled trades earn average or above average wages.”

The resulting shortage strains multiple industries that rely on these professionals to stabilize labor supply, and keep costs at a manageable level, especially in the pipeline industry. The Manpower Group, an international staffing agency, told the Post that skilled trade jobs are the hardest of all to fill.

Not to say, “I told you so,” but Forbes saw this coming back in 2013. It reported on a looming skilled trades shortage, observing that welders, electricians and machinists were already becoming tough to hire. “If these skilled trades workers are difficult to find now,” Forbes’ Joshua Wright observed, “just wait a few years. The skills gap is likely to become more acute.”

“Throughout North America, the pipeline industry is struggling to maintain a stable supply of skilled trades professionals,” says David LaBorde, Teamsters National Pipeline Director. “These include both specialized professions, and the versatile and critical role of our contractors, without whom neither training nor work opportunities are possible.”

Shortages of welders, heavy equipment operators, truck drivers, contractors and laborers are especially concerning for the pipeline industry. Each are critical professions for multiple markets beyond pipelines, from home-building and general contracting to more specialized, project-specific markets.

The Problem: Sustaining the Labor Pool

The shortage poses a two-sided problem: workforce development and recruitment. Starting backwards, pipeline companies need to recruit skilled workers and deploy them to projects. But before pipelines can recruit workers, those professionals need training with specific skill sets and must build experience readying them for deployment.

But unions face the same workforce challenges as all the other skilled trade recruiters.

“We’re really feeling this shortage just like everyone else,” says Marion Davis, construction director for the International Brotherhood of Teamsters. “We’ve become like pro football talent scouts, looking everywhere we can for the next generation of talent. As the pipeline industry expands so do our labor needs. So we’re staying one step ahead of the game, finding new folks to fill those positions.”

While traditional high schools lag in guiding young people toward trade careers, there is another group that could fill the void. Native American tribes have tremendous potential to fill this need while addressing important labor challenges of their own.

“Native American tribes are among the best partners for workforce development,” LaBorde says. “There’s a tremendous well of untapped talent, skill and work ethic in Indian Country. We’re always looking for ways to connect with tribes, reach out to their young people and see if our career pathways are a good fit for them.”

“We think these Tribal-Union partnerships are a workforce development tool for the future,” says Bobby Gonzalez, president of Tribal Energy Resource. “These partnerships put young people to work in Indian Country and help unions stabilize the pipeline industry’s labor strain. Our approach also promotes economic growth on reservations all over the country.” 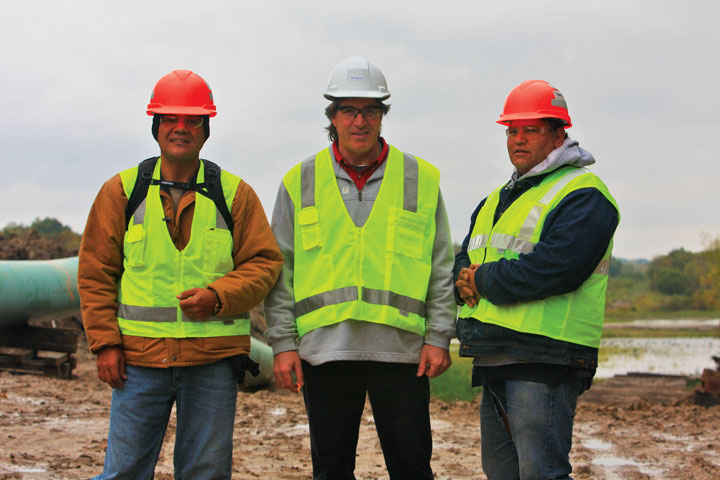 Reservation unemployment is a critical need.

Historian and law professor Robert Miller is a citizen of the Eastern Shawnee Tribe of Oklahoma. His book, Reservation Capitalism: Economic Development in Indian Country, explores this problem. Since 2000, he explains, reservation unemployment averages trended from 20 to 80 percent on specific reservations, with national averages hovering near 50 percent.

But it’s not all bad news. In an era of rising skilled trade demand, union membership aimed at pipeline construction is one great solution.

The Cherokee Nation is a prime candidate for a workforce development partnership. The largest American Indian tribe, the Cherokee Nation owns 35 companies producing more than $1 billion in annual revenue and $114 million in profits.

It’s no surprise that when Pipeliners Union Local 798 wanted a workforce development project with a major tribe, business manager Danny Hendrix struck-up a conversation with the Cherokee Nation.

“The Cherokee are a pre-eminent economic development force in Oklahoma and throughout Indian Country,” Hendrix says. “We knew a partnership with Cherokee Nation would open up tremendous opportunity. They have extensive experience in the region and in businesses supporting our pipeline industry partners.”

A sovereign government representing over 360,000 citizens, Cherokee Nation Businesses (CNB) are champions of workforce development. They employ 11,000 in all but one state. Within its home state of Oklahoma, CNB supports nearly 18,000 jobs, putting more than $2 billion into the State’s economy. CNB reinvests 63 percent of its net income back into Cherokee business for workforce development — from training to job growth.

Major sectors of CNB operate in three markets directly tied to the pipeline industry: logistics and distribution; federal contracting, and manufacturing and engineering. For all these reasons, Cherokee Nation is a first-rate case-study candidate for a Union-Tribal workforce development partnership.

After positive discussions, Cherokee Nation’s Career Services department teamed-up with the Pipeliners Local Union 798 to train Cherokee citizens as welders, journeymen and welder helpers. This culminated in an April 21 signing ceremony for a memorandum of understanding (MOU).

“This MOU is historic. It means tribes, especially Cherokee Nation, will be at the table early in the development process so we can voice opinions about cultural and natural resources before pipeline routes are determined and finalized here in Oklahoma,” Gonzalez says. “The union and tribal government will have each other’s interest in mind.”

Under the agreement, the Cherokee Nation will refer promising Cherokee workers to the Local 798 for training and job placement across the United States.

The union in turn provides Cherokee Nation citizens free, specialized training for natural gas and oil pipeline construction careers. Adding to the value of this training, Local 798 specializes in downhill welding, which accounts for the vast majority of work involved with their contracts.

The MOU compliments a broad training platform provided by Cherokee Nation Career Services. These include numerous vocational, educational, and employment programs as well as curriculum for youth, skills assessments and certifications, and many other resources for both individuals and businesses.

“Our career services department now offers training in carpentry, welding, masonry, electrical work, heavy construction, and other trades. It allows us to develop and encourage work habits and skills that promote employability and self-sufficiency,” says Diane Kelley, Cherokee Nation Career Services executive director. “Our partnership with Local Union 798 will give Cherokee Nation citizens yet another avenue for training and good-paying jobs.”

Many of today’s workforce development initiatives highlight the number of jobs connected to a proposed construction project. The Cherokee Nation-Local 798 partnership is doing much more: providing high wage, long-term career pathways with all the benefits of union membership in a high-demand profession.

“The Cherokee Nation is working hard to connect our citizens to stable, high-paying jobs that provide great benefits and lifelong careers. Our partnership with the Local Union 798 gives tribal citizens yet another pathway to employment for jobs that are in high demand,” said Cherokee Nation Secretary of State Chuck Hoskin Jr., after a recent tour of Local 798’s Tulsa training facility. “While the physical and mental demands associated with this field of work aren’t for everyone, we have citizens in the Cherokee Nation who are going to thrive in this environment and several have already expressed an interest.”

Local Union 798 has about 6,500 members, many of whom are members of federally recognized tribes. It connects qualified Cherokee Nation helpers and welders to projects in over 40 states across the country.

Entry level helpers have the potential to earn more than $100,000 per year, while some experienced welders belonging to Local 798 earn well above that, not including their benefits. Helpers connected to jobs through Local 798 complete 5,000 hours of field work before applying for the union’s welder training, getting paid for their time along the way. Because of high demand, the union offers these 14-week training courses three times per year.

“This isn’t just a job, it’s a lifestyle and a career path that can change someone’s life,” Hendrix says. “This agreement gives career opportunities to Cherokee Nation citizens that include nice wages, per diems, pensions, health care, 401(k) and structure. We want to help build careers. That’s really what it’s all about, and it just makes sense for us to work with tribal nations.”

Lou Thompson is CEO of Tribal Energy Resource, a consulting firm that specializes in Native American relations in the energy sector.