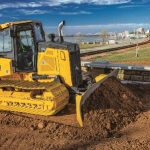 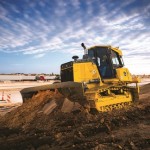 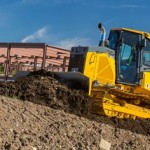 All three models incorporate John Deere’s new Eco Mode feature that optimizes fuel economy while maintaining ground speed by automatically adjusting engine speed and transmission settings based on load. A new push button throttle controls engine RPM, as opposed to a rotary dial. Speed increase and decrease buttons will cause engine RPM to either go to wide open throttle or to low idle. Pushing and holding the button will allow the operator to find the desired speed range.

The new crawler models continue to use and updates were made to the electronic control system for improved response and controllability. The motors were also upgraded from a two-speed design to a variable displacement design to optimize pushing power and drawbar pull.

Machine hydraulics were updated for improved performance and response, and offer new features when optional electro-hydraulic (EH) controls are ordered. A larger hydraulic pump is now available as standard equipment with the 550K and 650K for both mechanical controls and the updated electro-hydraulic system. The EH system on the 550K, 650K as well as the 700K is more responsive to operator inputs and the machine will significantly grade better when equipped with a grade control system.

The new blade shake feature with EH controls helps make every operator more productive. At the push of a button, blade shake causes the blade to shake in a quick, repeated motion that helps shed material from the blade.

When the dozers are ordered with the new EH controls, they are grade control ready to accept the system of the customer’s choice. John Deere’s “open-architecture” design lets customers easily employ their favorite brand of grade-control system – Trimble, Topcon, or Leica. For Topcon customers, all models can be factory-installed with a Topcon 3D-MC2 grade control system for faster availability and the ability to finance the system with the dozer purchaser.

The 700K comes equipped with John Deere’s V-Cool package. This system incorporates a cool on demand hydraulically driven fan that isolates coolers from dust and engine heat for increased efficiency and durability. An automatic hydraulic reversing fan is optional for all models.

For additional information and model-specific specifications on the new 550K, 650K and 700K, visit johndeere.com.