Take one of the largest producers of nylon polymers in the world and present them with a challenge and chances are someone at that company will find a solution.

That is more or less what led Invista, a subsidiary of Koch Industries, to create its Raptor nylon pipe. As the story goes, Invista officials, while at a trade show, were asked if its nylon 6,6 polymer could be extruded into a pipe. That was in 2012, and it prompted the company to look at how it could adapt what it knew about nylon polymers and see if it could create a new end-use application.

“When it came down to designing the polymer compound to be used, we started really looking at what the needs are in certain pipeline segments and are the best fit for the attributes and the characteristics of nylon 6,6,” says Steve Easley product manager for Raptor nylon pipe.

Nylon 6,6 is a nylon polymer that is used in a variety of industrial, textile and automotive applications including carpeting, airbags and hoses. Invista, formerly part of DuPont, has worked with nylon products since the 1930s.

Entering the Oil Field
Easley says nylon 6,6, when extruded to pipe form, is particularly well suited for oilfield work.
What Invista came up with was Raptor nylon pipe, commercially available since last year in 2-, 3- and 4-in. pipe with standard dimension ratios of 7, 9 and 11 and up to 2,000-ft rolls. Later this year, a 6-in. pipe will hit the market. Easley says the company is still building its inventory, but Raptor has found its way to several flow line applications in the Permian Basin. 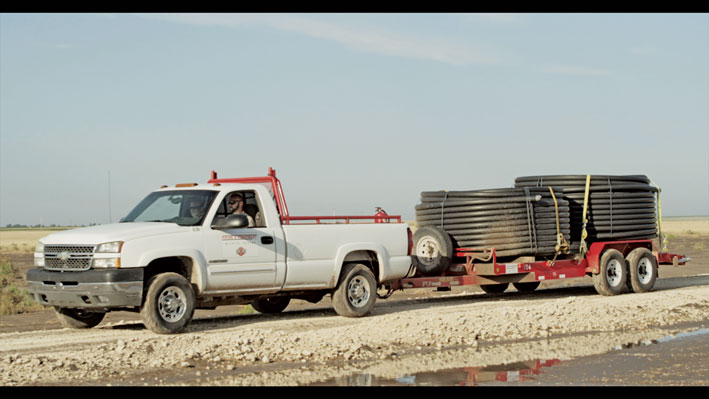 Raptor nylon pipe is available in up to 2,000-ft rolls and can be ground or trench laid. The equipment necessary to install Raptor pipe is the same used for installing high density polyethylene composite pipes.

These flow lines, typically 3- and 4-in. diameters, run from the wellhead to tank batteries and separators at an average length of a half-mile. Because Raptor is so ideally suited for this application, the company is focusing much of its attention in this segment. On the midstream side of the field, Raptor is suited for low-pressure gas gathering lines and produced water lines.

In both segments, unlike high density polyethylene (HDPE) and steel pipes, nylon 6,6 pipe is impervious to hydro carbons, and does not require de-rating when used in the oil and gas setting, it resists impact, internal and external abrasion, does not rust and can be ground or trench laid. Invista also rated the pipe at temperatures up to 200 degrees and up to 500 psi.

After testing, it was determined that Raptor’s abrasion resistance is up to 25 times that of HDPE and two to five times that of steel. The pipe’s thermal expansion coefficient of 62×10-6 in./in. per degree Fahrenheit is approximately one-third that of HDPE. As for impact resistance, testing shows it is four times more impact resistant than HDPE. Invista tested Raptor against 3-in. .188 ERW A53/x42 steel and 4710 HDPE.

Invista is in the process of obtaining an ASTM standard for Raptor. The process takes two to three years and Easley says Raptor should have its standard by the end of 2015.

Midstream Applications
“With natural gas (gathering lines), that one is a bit slower to gain traction, primarily because HDPE is so widely used,” Easley says. “Where we would be displacing HDPE would be very low pressure, we’re talking below 100 psi where HDPE is, in most cases, very well suited for that service not just because of the low pressure but because the pipeline diameters are relatively large in excess of 8-in. pipe which we are currently not producing.”

The midstream segment Easley is most excited to be involved with is the produced water. “That’s what we think will be our key midstream application,” he says. “Where you’ll see a lot of 3-, 4- and 6-in. pipe used.”

Most common produced water lines are HDPE reinforced pipes using fibers, metal or Kevlar and can handle pressures above 1,000 psi. Easley acknowledges that in some instances, there are better-suited pipes but in most cases, Raptor is a great fit. 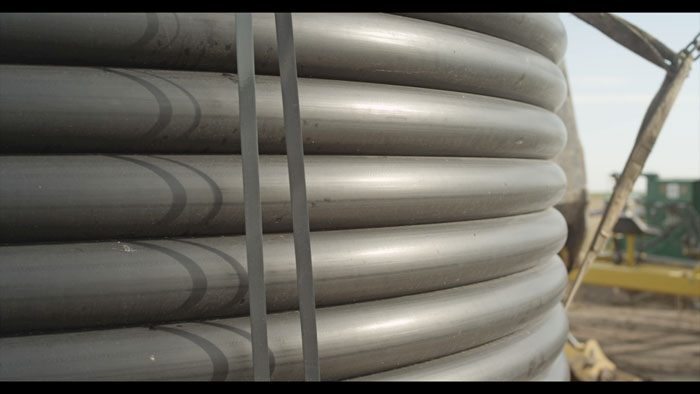 At this time, Invista manufactures Raptor nylon pipe in 2-, 3- and 4-in. with 6-in. pipe expected to hit the market later this year.

“Where operating pressures are 500 psi or less, we will be a great alternative and that is where we have potential with customers,” he says. “A lot of produced water is under 500 psi anyway, but companies use higher pressure HDPE composites because that is what is readily available on the market.”

In North Dakota and the Rocky Mountain areas, where there is great amount of attention placed on water usage, costs and recycling opportunities, Easley says Invista sees a great opportunity for Raptor to be a popular alternative given its reliability and integrity related benefits.

There are also cost benefits in the form of product and labor savings. Unlike some pipe products, with training about the correct equipment procedures and fusing temperature, crews that install HDPE can easily convert to running Raptor pipe using equipment already in their inventory. Invista also markets fittings to transition Raptor nylon pipe to existing steel sections.

“From a cost perspective, Raptor nylon pipe can be anywhere from 10 to 20 percent less expensive than other materials,” Easley says, adding that the saving increase when looking at costs on an installation basis.

Because Raptor is less susceptible to abrasion and impact it can be laid on the surface, a popular alternative for flow and produced water lines in the Permian Basin. There, he says, a company can save anywhere from $4 to $6 a foot, which is significant when running thousands of miles of pipe each year. Easley approximated the savings at $25,000 per mile. 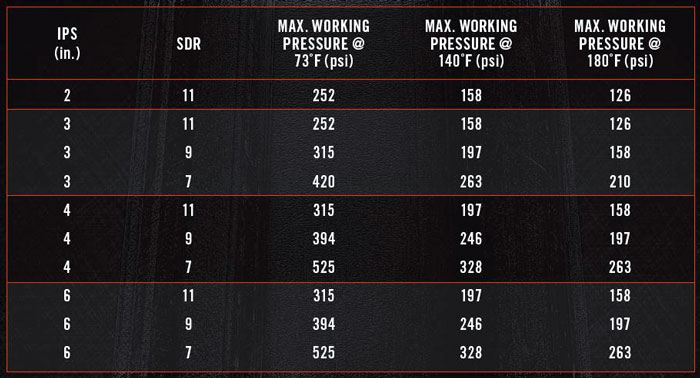 This chart shows the maximum working pressures for Raptor nylon pipe available in standard dimension ratios of 7, 9 and 11. The pipe can withstand pressures up to 500 psi and temperatures up to 200 degrees Fahrenheit.

Invista believes so heavily in the Raptor product that it committed to building a new manufacturing operation in McPherson, Kansas, to expand production and research for the product.

“Establishing a production facility in Kansas brings a number of efficiencies to our customers, including reducing delivery time to targeted basins in the Midwest, flexibility in production, and leveraging the capabilities of a skilled central Kansas workforce,” said Kurt Burmeister, Invista executive vice president. “With demand for our product increasing, we need to increase our production capacity. This is especially true as the current price of oil has led to increased interest in our Raptor nylon pipe, given its performance benefits and potential cost-savings.”