There may be confusion in the market about whether or not every composite pipe repair solution can be inspected using common methods, so pipe infrastructure owners may ask, “Are your composites inspectable?”

Today’s inspection standards regarding composites can be vague, and pipe infrastructure owners are typically referred to the repair system supplier for inspection, so it is reasonable that an understanding of composite repair materials and testing methods is not where it should be.

There are several levels where defects can occur. Beginning with the pipe wall and working outward, defects or damages can exist in three primary areas: in the substrate — in this case, in the repaired area itself — the bond line between the substrate and the composite, and within the composite repair itself.

Smart pigs, or inline inspection (ILI) systems, are the most widely recognized method of pipeline inspection. These ILI systems may not get the desired composite repair inspection results 100 percent of the time, but there are still many viable inspection alternatives. ASME PCC-2 only mentions a tap test regarding composite inspection, so it is important to know what the more sophisticated methods are.

There are inspection methods for just about any composite repair system that is on the market today, with six non-destructive testing (NDT) methods that are used more widely than others.

Ultrasonic testing (UT) is a process based on the propagation and reflection of sound waves as the means to detect flaws in the repair system. There are variations within UT methods, but phased array and electromagnetic acoustic transducer (EMAT) are the most applicable to composite repairs. Phased array can find defects in the composite and the bond line, while EMAT can find defects in both the pipe and the bond line.

With UT, a transducer probe is used to emit a high-frequency sound wave into the material being tested. The sound waves emit an echo after reaching the back wall of the material (in this case, the pipe). When the waves encounter a boundary between two mediums, a void or delamination, the damage will appear on the scan as a minor echo when compared to the larger echo of the waves reflecting off the back wall of the pipe. The location and depth of the damage can be determined by knowing the reflection time and the speed of the sound through the object. The type of transducer probe and waveforms used separates the different UT methods.

Phased array and EMAT are two methods that use UT inspection, but in very different ways. Phased array is a conventional UT method, which means that it scans a small section of the pipe near the transducer. EMAT is a guided wave UT method, which can scan the entire pipe over longer distances.

Phased array testing uses many transducers that can all be individually directed to scan various areas and angles of the pipe simultaneously. Using piezoelectric transducers, which require a fluid coupling on the surface, the phased array method can detect defects within the pipe, voids between the pipe and the composite repair and voids or delamination within the composite. The equipment transmits the results of its findings digitally, which can be viewed in either a 2-D top down view (C-scan), a 2-D side on view (B-scan), or a processed 3-D image. The type of image produced can vary between inspection companies.

EMAT is one of several guided wave techniques. Guided waves are different from conventional UT because guided waves utilize the structure itself to create waveforms that can inspect at longer distances.

There are 3 types of guided wave transducer types: EMAT, piezoelectric and magnetorestrictive. EMAT has the advantage of being non-contact, and available in inline formats as well to avoid having to dig up any assets to test. EMAT, which uses a two-coil design (one for transmitting and one for receiving), sends out electromagnetic waves that only interact with materials that are capable of giving off their own electromagnetic waves. Therefore, EMAT will only work with conductive materials like steel pipe.

EMAT can detect defects in the bond line through measuring the attenuation at the pipe wall. EMAT combines the electromagnetic waves produced by the transmitter and the material to create a sound wave that travels the length of the pipe and identifies defects within the pipe or delamination between the pipe and the composite. Results are digitally transmitted and offered in a 2-D top down (C-scan) image.

Pulsed eddy current and radiography are popular nondestructive testing (NDT) methods that provide the reliable data needed to find or monitor damage in the substrate itself.

While phased array and EMAT testing were linked by their basic operating principals — guided wave — pulsed eddy current and radiography have much less in common with each other. What links them together is their ability to inspect the pipe underneath the composite. Pulsed eddy current, a form of electromagnetic NDT, is a method based on Faraday’s Law of Magnetic Induction. This principle states that when an electrical conductor is in the presence of a moving magnetic field, it will generate a current. Conversely, when a current is run through a conductor, it will generate a magnetic field. Pulsed eddy current uses a transmitter to produce alternating currents that induce looping currents, or eddy currents, in nearby conductive materials — in this case the substrate.

This method detects defects that interfere with the flow of the eddy current. As the current flows around the defect, the current weakens and decreases the amount of current flowing through the coil of the transmitter. While a handheld pulsed eddy current transmitter can be oriented to find cracks and other defects in the substrate, this method is primarily used to measure the thickness of the substrate walls and detect wall loss. The data presented of the tested area by pulsed eddy current can be shown as a colored grid (though this may vary between inspection companies). Areas with greater wall loss will show up as a color corresponding to the severity of loss. Performed with a single transmitter, the pulsed eddy current method requires only the portion of pipe that is being tested to be accessible. While pulsed eddy current is not used for defect detection within the composite itself, this method is commonly used in addition to other NDTs.

Radiography, or X-ray, is a method that is more expensive, time-consuming and involves greater safety risks, but provides more specific results and data than pulsed eddy current. Radiography methods require the use of a transmitter and receiver, placed across from one another on either side of the pipe being inspected. This method usually requires the pipe to be completely exposed, which can mean longer preparation time and an expensive labor cost if the pipe needs to be dug up to access it.

The transmitter sends radiation through the pipe in the form of electromagnetic rays such as X-rays or gamma rays; gamma rays have higher energy and a shorter wavelength than X-rays. Operators are dealing with radiation, so safety is high priority with this method. Waves that have not been interrupted by the atoms within the pipe or composite material make their way to the receiver and form an image that gives an actual photographical representation of the insides of the pipe and composite, unlike the grid visualization of the pulsed eddy current method. While it is possible to inspect the composite and the bondline as well with radiography, it can be more difficult than substrate inspection. Radiography is very sensitive to the inspection angle and if a disbond or delamination is not aligned parallel to the radiation rays then it is not likely to show up. This means that you will need to rotate the machine around the entire pipe in order to find defects in the composite or bondline. 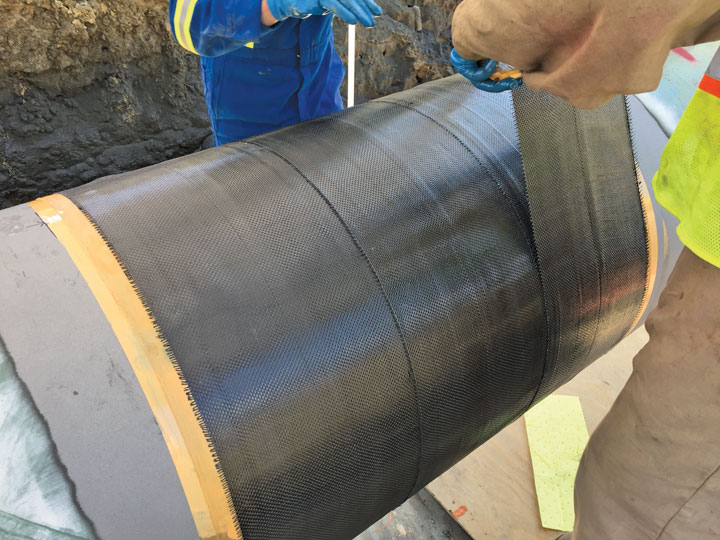 Inspection standards regarding composites can be vague. There are a number of testing methods available to ensure repair solutions meet integrity standards.

Microwave and thermography methods are non-contact methods, meaning no physical connection between the pipe and the inspecting instrument is needed. Both methods also have a similar breadth of defect or damage detection. While many NDTs can detect defects within the substrate itself—even through an applied composite—these two methods are primarily used to detect and analyze delaminations or disbondment within the composite repair or between the composite repair and the substrate, and are less capable of inspecting the substrate itself.

Microwave testing methods were originally developed as a newer way to inspect dielectric materials. Most composite repairs, other than carbon fiber composites, are prime candidates for this type of inspection. With its transmitter and receiver built into the same device, this method is simple to operate.

Backscattering microwaves sent from the transmitter pass through a composite with a dielectric constant. The waves are reflected back when encountering a void or discontinuation in the material. These voids are identified as areas of delamination, disbonding or gouged composite and cause the microwaves to be reflected back to the inspection instrument at a different rate. In a 2-D color or grayscale representation (depending on the inspection equipment), inconsistencies in the reflected rays represent the defects within the composite.

Thermography inspection, the more difficult of these two methods based on the amount of equipment involved, analyzes the change in thermal activity within the composite to detect defects. This method requires an infrared camera and equipment to apply energy to the inspection area. As this energy encounters a void or discontinuity, it is dissipated as heat at a different rate than the rest of the material. The infrared camera is then able to detect these hot zones by recording the surface temperature of the composite and the defects. While this method allows for quick inspection of larger areas, it has a significant drawback; the applied energy diminishes as it progresses deeper in to the composite, so thermography inspection works best for defects closer to the surface. The thicker the composite, the more difficult it will be to identify deeper defects. 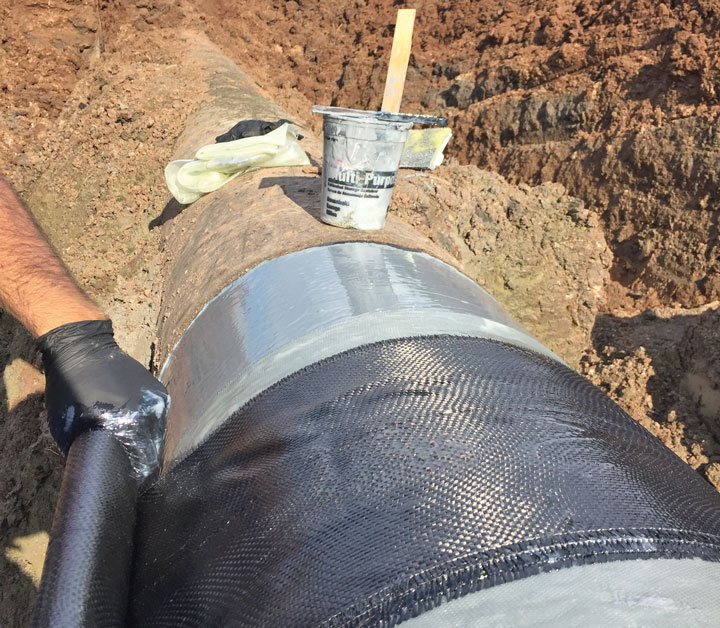 Most materials used in today’s pipeline repair applications are capable of being inspected. It’s just a matter of finding the right solution for you.

The necessity of functional pipes and pipelines that meet federal requirements and are capable of being inspected is inarguable, and the variety of options available to asset owners for composite inspection methods should be as well.

Most, if not all, of the materials used in today’s repair applications are capable of being inspected, and by several unique methods. After reading about these vastly different methods, asset owners can approach the topic of composite inspection with a different mindset. Instead of asking if a composite is inspectable, they can ask, “What inspection method is best for my particular composite repair?”