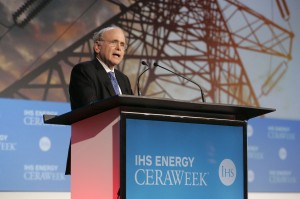 The medal honors an “individual’s distinguished contributions to advancing our understanding of the threats, opportunities and energy policy choices impacting the domestic and international energy security interests of the United States through analysis, policy or practice.”

Presenting the award, Secretary Moniz said that Yergin “has made unique contributions to the energy sector debate. His singular influence over the discussion of energy, and public understanding of the history and future trends of energy is unmatched.”

Yergin said he was “extremely honored” to be presented with the medal.

“The strengthening of the United States’ energy position through advancements such as the U.S.-led revolution in unconventional oil and gas production as well as the continued innovation and progress of renewables has been one of the major developments of this young century,” he said. “The ever-growing importance of energy to our daily lives makes the work of the Department of Energy under Secretary Moniz’s distinguished leadership all the more vital and I am extremely grateful for this honor.

“The need to focus on energy security is continually driven home, whether by Middle East turmoil, the huge storms that have disrupted the Gulf Coasts and New York or cyber threats,” Yergin added. “All this reinforces the great focus on energy security that James Schlesinger clearly defined and represents part of his lasting contribution to the United States.”

Yergin is a world-recognized authority on international energy policy, politics and economics through his research and writings over several decades. His latest bestseller, The Quest: Energy, Security and the Remaking of the Modern World, has been called “a masterly piece of work” by The Economist and hailed by the Financial Times as “a triumph.” The New York Times said it is “necessary reading for chief executive officers, conservationists, lawmakers, generals, spies, tech geeks, thriller writers,” among many others.

He is a Pulitzer Prize winner for his book, The Prize: The Epic Quest for Oil, Money and Power, which has been translated into 19 languages. Other significant works by Dr. Yergin include Commanding Heights: The Battle for the World Economy; Russia 2010; Energy Future; and Shattered Peace. Both The Prize and Commanding Heights were made into PBS/BBC television series.

Yergin earned his bachelor’s from Yale University and his doctorate from Cambridge University in England, where he was a Marshall Scholar. Prior to founding Cambridge Energy Research Associates, which was acquired by IHS in 2004, he taught at the Harvard Business School and the Harvard Kennedy School of government. He is a member of several organizations, including the National Petroleum Council and the U.S. Secretary of Energy’s Advisory Board. He is a trustee of the Brookings Institution and a director of the Council on Foreign Relations and the New America Foundation. He is also on the advisory board of the Massachusetts Institute of Technology Energy Initiative.