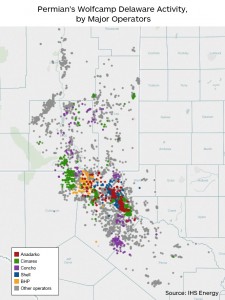 A map of the Wolfcamp Delaware play.

According to the IHS Energy Wolfcamp Delaware Review, the still adolescent play in the Permian basin offers a promising adulthood as E&P operators work to expand their development.

As more companies enter the play, located in the western portion of the Permian basin that straddles the Texas-New Mexico border, sweet spot identification and delineation are the focus. According to the IHS report, Wolfcamp Delaware has the economic potential to sustain select operators through this period of distressed oil prices. However, like most adolescents, it is a story of promise, potential and testing limits.

“The Wolfcamp Delaware has promise, but right now, it is considered an adolescent in terms of its maturity,” said Reed Olmstead, manager of the North American Supply Analytics Service at IHS Energy, and the principal analyst behind the analysis. “The sweet spots are still being defined because these normalized production rates have not shown signs of flattening, which means the limits of the play have not yet been fully delineated and operators are still learning how to best produce from this reservoir.”

“Additionally, a very high number of operators—150—have produced from the play to date,” Olmstead said, “as compared to fewer than 90 operators in the Eagle Ford shale. Despite that high number, you have just two operators who are dominant in the play—Concho Resources and Cimarex Energy, who are delineating and testing the limits of the various sweet spots and production streams of the play.”

Concho Resources has been active in the Southern Liquids sub-play, while Cimarex has been focused on the Central Gas sub-play. Economics for both operators in their respective sub-plays, said the IHS review, are sufficient for drilling through the pricing downturn, but future delineation and possible expansion might be halted until oil prices recover and/or costs fall even further.

As a result, IHS Energy expects a good bit of movement as more operators enter the play and some, who lack quality assets, the financial stamina to wait for better break-even prices, or those who don’t consider the play core to their strategy, will exit.

Despite being major operators in the play, said IHS, Cimarex, Concho, Occidental Petroleum, and Clayton Williams still have relatively low well counts in the sub-plays that are expected to drive future production. Thus, while their well economics are representative of average historical returns, operators may be able to significantly improve their economics as the play is further delineated and developed.

Occidental’s President and CEO, Steven I. Chazen, speaking at the IHS Energy CERAWeek 2015 Conference in Houston in April, underscored his company’s bullish enthusiasm for the continuing potential of the Permian Basin and its sub-plays, thanks to technological breakthroughs in energy production in the next decade that he said could release 10 billion to 20 billion barrels of crude from the Permian.

“The potential in the Permian is enormous,” Chazen said. “I think we’re on the edge of a major revolution in production in the Permian, and 25 years from now, I think the Permian will still be the premier basin.”