The giving-back spirit of the utility construction industry resulted in a very successful ICUEE Benefit Auction, with $29,575 raised to help connect military veterans with quality jobs. 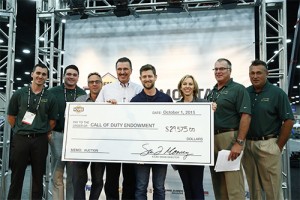 All proceeds went to The Call of Duty Endowment, which estimates that the funds will translate directly into 42 job placements for veterans.

This national organization supports and funds the highest-impact non-profit groups that prepare veterans for the job market and raises awareness of the value that veterans bring to the workplace.

The ICUEE Benefit Auction was held during the recent International Construction and Utility Equipment Exposition (ICUEE) at the Kentucky Exposition Center in Louisville, Kentucky. ICUEE exhibitors donated products and services; the auction was open to all with online and onsite bidding.

“We were humbled to be chosen for the auction and were amazed at the enthusiastic and generous support of the ICUEE community and their interest in giving back to those who have served in the military,” said Danny Greene, campaign manager of The Call of Duty Endowment.

Greene relayed instances of ICUEE show participants donating money before the auction when they heard about the effectiveness of the organization in job placement, and of several businesses committing onsite to hire veterans.

“With this auction, our industry provided meaningful support for such an important cause, and it exemplified how utility professionals help their communities and others all across America,” said show director Sara Truesdale Mooney.

ICUEE is also known as The Demo Expo and is the largest event for the utility industry, owned and produced by the Association of Equipment Manufacturers (AEM). The show brings together industry professionals to gain comprehensive insights into the latest technologies, innovations and trends affecting their industry.