For nearly a century, Henkels & McCoy Inc. has been at the forefront of many of the major energy infrastructure projects in North America. Headquartered in Blue Bell, Pennsylvania, the leadership at the privately held, family-owned company sees a bright future for its oil and gas pipeline and gas distribution segments.

Henkels & McCoy, formed in 1923 by John B. (Jack) Henkels, Jr., focused on tree trimming and landscaping at first and eventually grew into telephone and electric utility work. It was the 1940s and World War II that saw the company begin to focus on infrastructure installations and its entry into gas distribution. Large oil and gas pipeline came into the fold in 1965. As the company grew, Jack Henkels’ wife Anne and his sons Paul M. Henkels and John B. Henkels III, both of whom would take leadership roles in the company, joined Henkels & McCoy.

Today, the company boasts more than 5,000 trained and skilled personnel and more than 50 offices from New England to Hawaii. Most importantly, the third generation of Henkels is at the helm. T. Roderick (Rod) Henkels, Jack Henkels’ grandson, is the chairman, president and CEO of Henkels & McCoy Group Inc. — the holding company formed in 2016 to enable the future growth and better serve customers of Henkels & McCoy Inc., HMI Services Inc. and H&M Shared Services Inc.

The company’s mission is to create a better connected world, as the builders of the world’s strongest infrastructure networks, bringing reliable energy, communications and utilities to people everywhere. 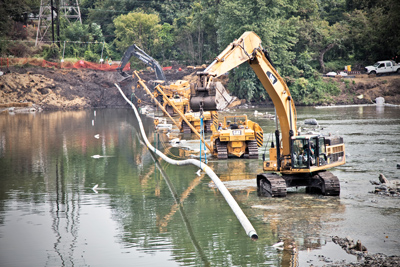 “Since its inception, our pipeline and facilities teams have continued to focus on growth opportunities within the industry. As our customers’ needs have increased, we have grown our operation to meet the challenge,” says Edward J. Murphy, senior vice president of oil & gas pipeline for Henkels & McCoy Group. “This was extremely notable during the boom years of 2007 through 2010 when we performed work from the West Coast to the East Coast. We also have had a very large presence in the maintenance and upgrading of existing customer infrastructure, known today as pipeline integrity.”

Murphy has more than 50 years of service at Henkels & McCoy and is also the Pipeline Division senior vice president.

The Pipeline Division has participated in numerous well-known projects, including several Texas Eastern Gas Pipeline expansion projects in the Northeast in the 1980s. During the most recent pipeline boom the company was instrumental in the first phase of TransCanada’s Keystone project, the Mid-Continent Express (MEP) for Kinder Morgan, the Baja Norte in Mexico for Sempra Energy and the New Jersey-New York Expansion project for Spectra Energy, to name a few. The facilities team has also had several major projects, including, the Stevens Point Compressor Station for TransCanada, the White Pigeon Compressor Station for Consumers Energy and the Lambertville Compressor Station for Spectra Energy.

The New Jersey-New York Expansion project, Murphy notes, is special because it was the first natural gas pipeline into Manhattan in more than 40 years. Completed in 2013, the project involved nine challenging horizontal directional drills to route the new pipeline under the congested and very busy streets of New York City.
“Henkels & McCoy has always valued our relationships with our customers, suppliers, and our workforce and we have strived to grow and maintain these relationships and to grow with the industry as the industry has changed,” Murphy says. “Whether for safety, project management, equipment or newly developed construction services, we utilize only the most innovative, cutting-edge technologies available to yield world-class results.”

Safety is the top priority for the company. In 2009, it invested in a large-scale safety transformation initiative with DuPont Sustainable Solutions to create a sustainable, company-wide safety culture.

“At H&M we believe that in a mature safety culture, safety is truly sustainable, with injury rates approaching zero,” he says. “By embracing our corporate safety culture, ‘Nobody Gets Hurt!’ the organization, as a whole, realizes significant business benefits in higher quality, greater productivity, and increased profits.”

Like other pipeline contractors in recent years Henkels & McCoy has faced challenges from low oil prices and lack of qualified labor to untimely permitting and public opposition to pipelines, but the division has a bullish outlook for what lies ahead.

“We believe with the timely issuance of project permits, we will once again be looking at a record year in the Pipeline Division,” Murphy says.  “The biggest opportunities are in the regions we are exploring and developing shale gas. There needs to be sufficient pipeline capacity to move the shale gas to the marketplace.” 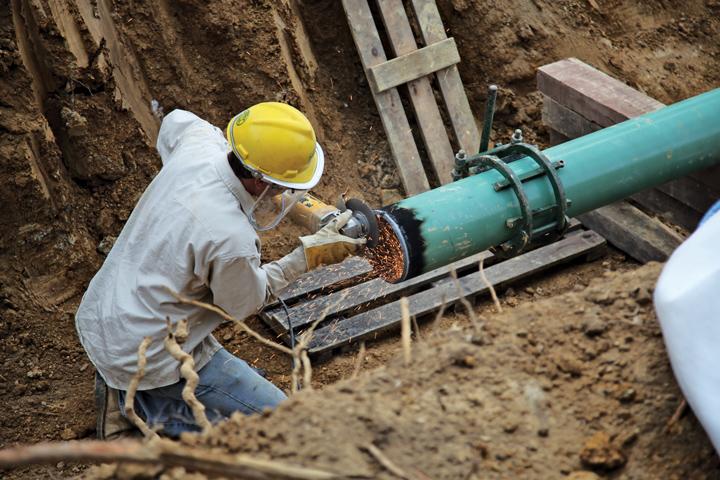 The northeastern United States has some of the oldest gas distribution systems in the county, much of which is cast iron and bare steel. Many of Henkels & McCoy’s customers in the East Region — stretching from New England to Virginia — are already well into or just ramping up capital improvement projects on the systems. Much of this work involves the conversion to plastic pipe products.

“Many of the utilities have started on long-range upgrade plans, and they have accelerated them almost without exception to condense the number of years in which they want to complete this work,” Shoosmith says.

He notes that there are many miles of pipe that need to be upgraded and with increased state regulation and oversight, utilities are setting up multi-year projects with yearly, state-mandated, goals attached. Each utility has different methodologies as to how the work is completed on a year-to-year basis. One thing that is shared across all of these utilities is the fact that they no longer want to wait 40 years for all of the improvements to be completed.

For companies like Henkels & McCoy, this condensed timeframe and four- and five-year blanket projects are both a blessing and a curse. On the positive side, having a long-range contract means that Henkels & McCoy can properly plan staffing and equipment requirements and the crews are in the same geographic area for several years.

“We want to see our work as leveled as possible and these longer contracts give us that ability and foresight of what our staffing needs to be — not only the crews in the field doing the work but the administrative side to support them as well,” Shoosmith says. “The community gets used to seeing Henkels & McCoy in their community and we are able to establish a relationship with the municipalities and their boards and we become the point of contact if they have any questions or concerns.”

The downside of a condensed schedule — and it’s something that the construction industry as a whole has had to deal with in recent years — is a lack of a qualified workforce. On the gas distribution side of the construction industry challenges also exist in finding workers with the proper operator qualifications (OQ), which are mandated by regulators and can vary from utility to utility.

“The acceleration (condensed schedules) I mentioned earlier makes sense on many fronts. The utilities are getting a modernized system and the states are happy it is getting done faster than expected,” Shoosmith says. “The challenge, however, is that the more we accelerate and more condensed the work becomes, the more burden that puts on the manpower required to do it.”

Experience levels are getting younger, as workers from the last oil and gas boom reach retirement age. In the Northeast, Henkels & McCoy is vying with competitors and utilities for the same labor pool. And everyone is working to retain experienced employees and not lose them to a competitor or customer, which drives up labor costs.

“The recruiting efforts by the unions and contractors such as ourselves are on overdrive trying to attract people to the industry and find the people who want to do this work,” Shoosmith says. 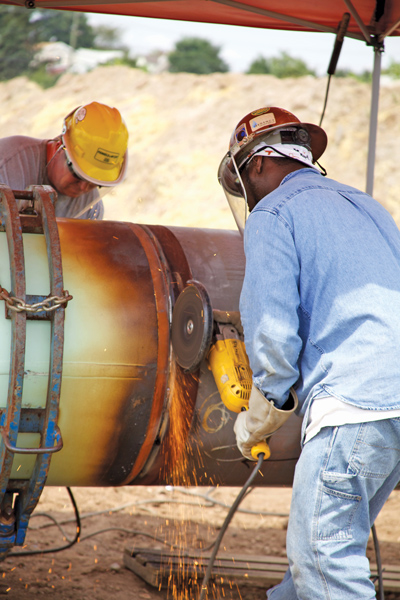 Training the Next Generation

On two fronts, Henkels & McCoy is working on ways to combat this shortage. Two years ago, the company, along with some competitors and utilities in Pennsylvania, helped create the Gas Distribution Pipeline Mechanic Introduction Program for Philadelphia area community colleges. Shoosmith notes that the second group through the program completed their studies in December. At the end of the program, utilities and contractors hired the candidates.

After several years of planning in 2016, Henkels & McCoy invested in the establishment of a permanent classroom and hands-on training center in Pennsylvania. Leading the training are many of the recent  industry retirees who can serve as mentors to the new hires.

“That is something that I believe is unique. Most of the gas utilities have gas training schools and programs, but for a contractor to undertake that kind of investment and commitment is innovative,” Shoosmith says. The facility, which will host its first class in the first quarter of 2017, will be used to both train new hires and, more immediately pressing, it will host OQ training to current employees.

“OQ is a federally mandated rule that each individual must demonstrate both knowledge and hands-on ability to complete a given task in the presence of a subject matter expert,” Shoosmith says. “Without having that credential it doesn’t matter how many years you have under your belt you can’t work on the project.” Often times the OQ requirements for utilities vary even though the scope of work that the Henkels & McCoy employee is conducting is virtually the same. The ability to offer OQ training makes the new facility a true asset to the company.

“We want to recruit people and have a beginner’s class to introduce them to the basics of the industry. Once we feel they have interest, the work ethic and the desire to be in the industry, we can offer more training at the school and some more OQ training to allow them to do more in the field,” Shoosmith says. “Hopefully we will develop some solid gas workers that will benefit us down the line.”

As Henkels & McCoy moves ahead, it continues to work internally, as well as with the utilities, the unions and even competing contractors to continually share training and safety information as well as recruit more individuals to the industry. Shoosmith reiterates that the outlook for gas distribution work is tremendous and if someone chooses to come into this field — whether it is from a high school, a career-tech school or college — it will be a career they can be proud of, as there is work to be done for decades.