Is everything really bigger in Texas? If HDD projects are any indications, the old adage may actually be true.

In 2018, San Antonio-based contractor Hard Rock Directional Drilling completed a long-distance, large-diameter pipeline installation through rock in Midland, Texas. The successful project demonstrated how experience, planning and execution can come together to showcase the industry’s capabilities. For its accomplishments, the Hard Rock Directional Drilling 8,400-ft Midland, Texas, bore was named the 2019 Project of the Year for New Installation by Trenchless Technology, a sister publication of North American Oil & Gas Pipelines.

The project was initially envisioned as a short crossing of Highway 191 in Midland, but as the planning and permitting process evolved, the simple crossing was no longer an option, and the length went from hundreds of feet to thousands due to right-of-way restraints, utility conflicts and surface limitations. Ultimately, a route spanning 8,400-plus ft was selected.

“Our success in the industry has been in getting involved in complicated projects on the front end and help develop a constructable design in the beginning,” said Hard Rock Directional Drilling’s Cory Baker. “There is less delay and less downtime when we’re able to come in beforehand and see the potential problems. We had a great team with Fasken Oil & Ranch and Kingsley Constructors (pipeline subcontractor) to help make this such a successful drill.”

Using a Vermeer D1000x900 and a D500x500 Navigator horizontal directional drill (HDD) outfitted with an 8-in. mud motor and a pair of Vermeer R9x12T reclaimers, Hard Rock Directional Drilling installed a total of 8,414 ft of 30-in. diameter steel pipe in rock along a busy highway. 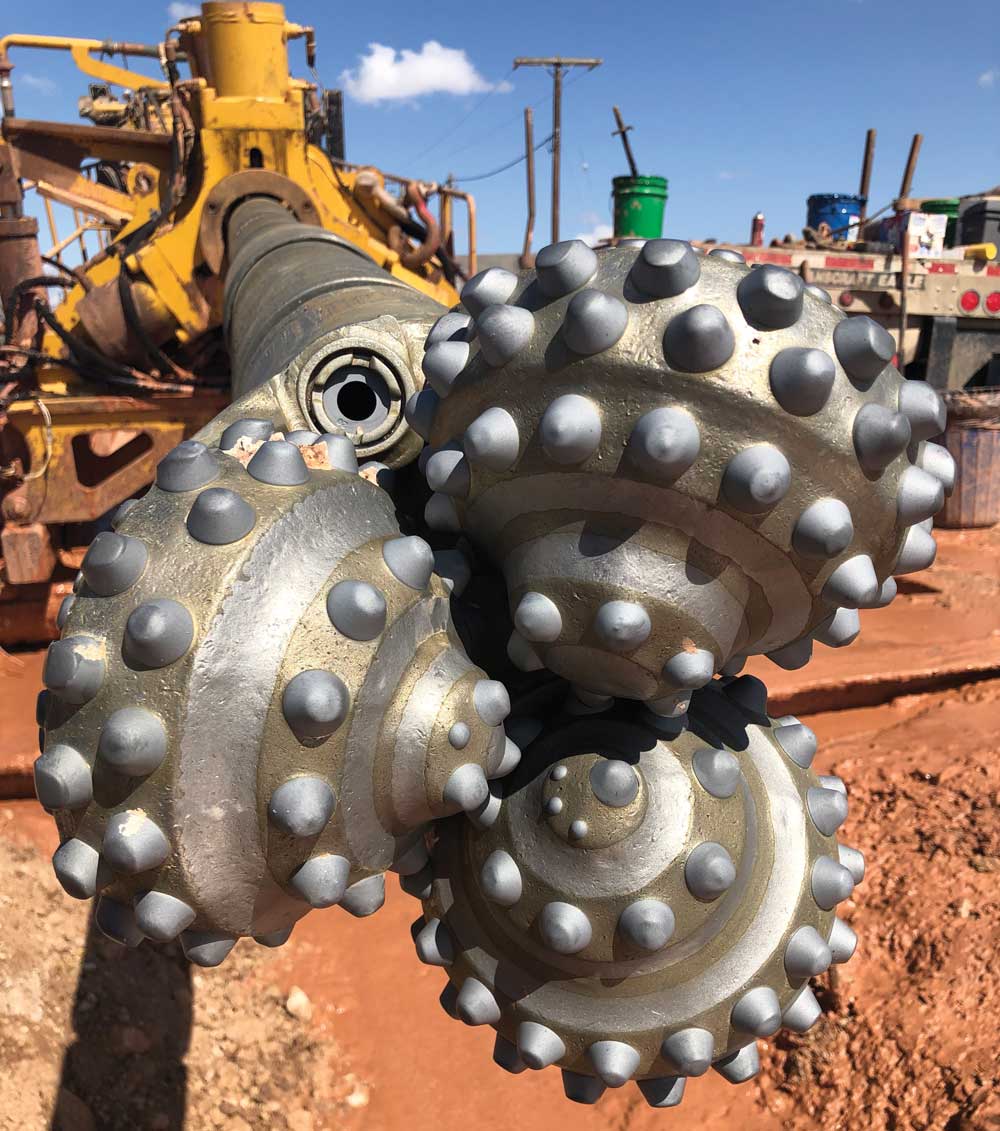 The bore distance did not intimidate the Hard Rock Directional Drilling crew. It was the weight of the 30-in. steel pipeline they would have to eventually pull back that gave them a moment of pause. By the team’s calculations, they would likely need an HDD rig capable of pulling back up to 800,000 lbs.

To perform the bore as efficiently as possible, Hard Rock Directional Drilling decided to use a drill on each side with a planned intersection near the middle of the bore. The Vermeer D1000x900 was set up on the Midland side of the bore path, and on the exit side the crew used a Vermeer D500x500. The drills were outfitted with 8-in. mud motors and 12.75 in. bits to perform the pilot bore through sandstone and limestone. It took 12 days for crews to complete the initial bore at an average depth of 60 ft. 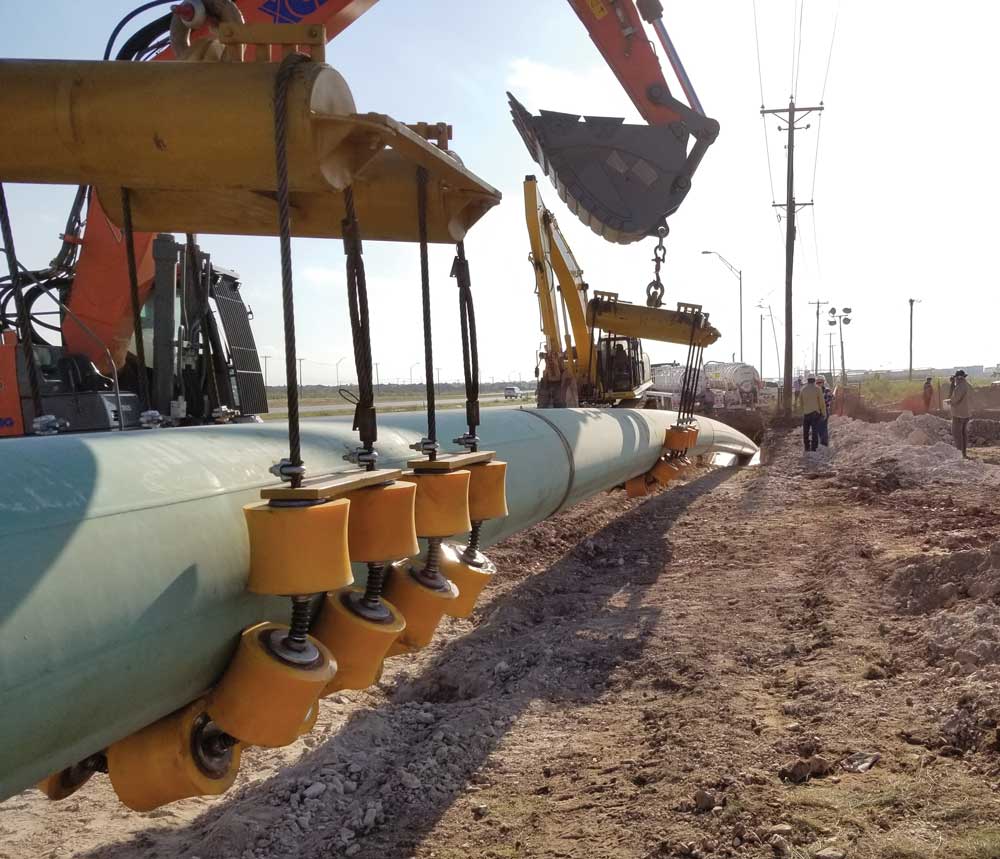 Drilling through rock is something that, not surprisingly, Hard Rock Directional Drilling is comfortable doing. “When you’re drilling an 8,400-ft, 30-in. bore you’re opening up a very large hole, and you want to have stable ground so the hole stays open. We chose the strata of limestone and sandstone so that we would be in good, stable ground conditions,” Baker said.

Presenting another challenge, however, was an S curve near the exit side of the bore that was needed to navigate around a Texas Department of Transportation turning lane. This led to Hard Rock Directional Drilling’s decision to drill from both sides using the intersect method.

Hard Rock Directional Drilling used a Tensor Tools wireline navigation system that allowed the crew to use the same grid to track the tools from both rigs. The experienced crew was able to intersect the hole on the first try.

After completing the 8-in. pilot bore, the crew continued to use both drills to open the hole to 48 in. in diameter using 24-, 36- and 48-in. hole openers while pumping around 1,200 gallons of fluid per minute down the hole.

Hard Rock Directional Drilling used a mix of bentonite and a larger molecular weighted polymer additive to help verify the cuttings would be flushed from the drill hole. And, crews used around 180,000 gallons of water throughout the 84 days they spent on the project.

After three passes were made with hole openers, Hard Rock Directional Drilling was ready to connect the 1.7 million-lb pipe string to its Vermeer D1000x900 and pull back. Kingsley was able to weld the entire length of pipe in one piece prior to pullback, and it took the team just 23 hours to pull the 30-in. pipe to its final resting place, and a maximum pull force of just under 600,000 lbs.

According to Robert Myers, owner of Hard Rock Directional Drilling, the keys to completing this job were a lot of upfront planning, employing highly skilled and trained crew members and providing them with the resources they needed to get the job done.

“As a company, we work in rock all of the time and we’ve done a lot of long drill shots and opened up some pretty wide holes,” he added. “But, this particular one is memorable, because it combines all of the traits that make a job challenging. The Midland bore is a project that I’m sure no one at Hard Rock Directional Drilling will soon forget.”

According to Robert Myers, owner of Hard Rock Directional Drilling, the keys to completing this job were a lot of upfront planning, employing highly skilled and trained crew members and providing them with the resources they needed to get the job done.

“Hard Rock has developed a reputation for completing the most challenging projects safely, efficiently and on schedule. Hard Rock Directional Drilling continues to raise the bar for operational excellence, and the Fasken Oil project is a great example,” said Marvin Klein, global accounts manager at Vermeer.