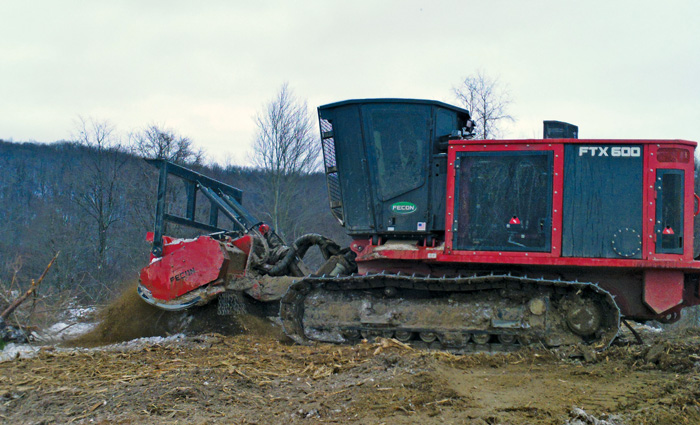 If time is money, then downtime is lost money. At least for the highly competitive oilfield services businesses that service the Marcellus shale projects in northwestern Pennsylvania. Land clearing contractors who specialize in pipeline rights of way or well site clearing projects know that when the call comes they either have to be ready to start the project or it will go to the next closest bidder on the list. To ensure that his crews were not only available, but also productive, Josh White of White Energy Services (WES), based in Smock, Pa., recently purchased a purpose-built 600-hp mulching tractor from Fecon. And he says he’s “never seen anything like it.”

Ready for Anything
Vegetation on this broad expanse can be anything from light underbrush to fully developed forests of oak, pine, hickory, poplar, sumac, cherry … you name it, and it’s out here. And it all has to go. Specs typically call for mulching to ground level to allow follow-on site vehicles to traverse the ground easily. To be ready to handle anything that he might encounter, WES operates a full fleet of equipment, including remote track chippers, skidders, feller bunchers, a skid steer with a mulching head, towable chippers and several excavators — each fitted with harvesting and clearing tools including grapple saws, grapples, thumbs and a Sneller stump grinder, articulated trucks, seeders and mulchers. And then there’s that 600-hp mulching tractor.

Despite this arsenal of equipment and the many others that he’s operated over the years, White was taken aback the first moment he climbed onto the FTX600 mulching tractor.

“This machine is totally different than any other machine I’ve ever been in,” White says. “With the cab all the way forward and the tracks that oscillate, it’s a weird feeling. It takes some getting used to.”

But while the ride may take some getting used to, the performance is another matter— White and his crews got used to that right away. In addition to imparting low ground pressure (just 5.9 psi), the tractor has a ground clearance of 21 in. The machine is rated for 1:1 slopes and White has no problem believing that.

“We get on some pretty steep slopes here. I’ve been on some that were close to 45 degrees with the machine,” recalls White. “I’ve gone places I don’t have the nerve to go and it hasn’t skipped a beat.”

This versatility helps eliminate the need for additional machinery on the jobsite. If White were unable to traverse some of the slopes with the Fecon unit, he would have to haul a dozer in and push all the material to a spot where they could get to. This would require hauling another machine in, which requires an additional operator and adds wear and tear on the machine, transport costs and more headaches.

“Being able to clear the slope with a machine that needs to be there anyways is a huge advantage,” White says.

The versatile Fecon is also helping to bolster productivity for WES crews. White recalled a project from the summer of 2012 that called for clearing for a new pipeline. His crews cleared a 5.1-mile stretch to a width of 75 ft in about a month with just four machines: two excavators, a track chipper and the FTX600.

“We did it with four machines because we were very busy at the time,” White says. “We would usually have more equipment on a job of that size but we were making such good headway that we could start another project. This particular job had a little of everything in it. Standing timber sections, heavy underbrush sections, and a section that was nearly 1 mile long of nothing but old slashing from a logging operation. We did that last mile in three days with the Fecon. It was perfectly suited for that type of job. The material was too rotten for a chipper and the access was too small to bring in a horizontal grinder.”

In this instance, having the right equipment not only eliminated downtime, but it also boosted productivity since the company was able to start another project with equipment that was not needed on this jobsite.

Where the Mulcher Meets the Mud
Once there, the mulching is accomplished with fixed hammers mounted to a solid rotor that is 109 in. wide — ample distance to more than cover the 98-in. machine width. The heavy duty mulcher head has a lift range of 125 in., which includes 93 in. above ground to attack standing trees. As important for White and his crews is the 32 in. of belowground range that the FTX600 offers. This allows stumps to be ground to sub-soil level and incorporated into the earth for faster decomposition with a single step.

Grinding of stumps, especially those pushed out of the ground, is huge for White and his crews because they push the trees over, which creates another problem to deal with: the root ball. This is mulched along with any other clearing debris which is left over.

“Some of the companies that we work with do not like the chips left on the ground because of the effect they have on the soil pH,” White says.
That is in contrast to chipping materials and blowing them into a truck to carry off-site, because of the reluctance to allow chips to remain as ground cover in some counties. Even with the severe duty of grinding big wood — such as 20- to 30-in. diameter oak, cherry and sumac — as well as grinding stumps and then incorporating that into the soil, White is still getting 140 hours on a set of mulching teeth.

“At that point they are rounded and produce longer shreds than when they are new,” White says, “so we change them out. If we were doing underbrush, saplings and smaller diameter materials, we might get 400 to 500 hours out of the teeth.”

The time required to change out teeth is about an hour, according to White. While tooth service life is certainly a visible component of mulcher maintenance, it is still just one consideration.

“Everything forest related requires maintenance, it’s just the nature of the beast,” he says. “But the FTX600 has been great.”

In the oilfield services business, the name of the game is uptime — being ready to answer the call when it comes. Having the right equipment, including the new 600-hp mulching tractor, has helped White Energy Services eliminate downtime and boost productivity. And that has these crews whistling as they work their way through the woods, from jobsite to jobsite along the Marcellus shale region.

Tom Hoyer is product manager for Fecon, based in Lebanon, Ohio.