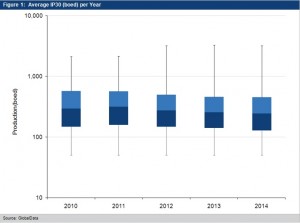 Edward Coll, an upstream analyst covering the onshore market in America for GlobalData recently sees that production in the Eagle Ford shale play is resilient despite supressed oil and gas prices.

“The last five months have seen a drastic drop in the rig count for oil and gas development in the U.S. Oil production has continued to grow, but the increase in month-to-month production has slowed significantly since the swell earlier in 2014,” Coll said in a release from GlobalData, a leading global research and consulting firm based in the UK. “The Eagle Ford Shale, like the other shale plays, has experienced slowing production levels. This is notable because, over the past five years, oil production growth from the Eagle Ford has been one of the main drivers behind the U.S.’ return as the top oil producing country in the world.”

Coll’s remarks are based on looking at the initial 30-day production rates (IP30) of a new well. This IP30 rate is an industry basis used to measure a well’s production efficiency. The initial production of a well is important when considering a well’s overall economics because most wells produce the most resoruces within that first year and decline after that.

“Looking at the average IP30 rates for all wells in the Eagle Ford since 2010 shows that overall well production efficiency has been relatively flat, if not trending downward, from 2010 through 2014. The first technical modern Eagle Ford well was drilled in 2008, which spurred the rush to acquire prime acreage in the region and conduct testing to improve production efficiencies through different completion techniques and well configurations,” Coll said.

“It is common to see improved well productivity during these earlier stages, but the play is now in a phase where potential well productivity has stabilized and operators are focused on developing key acreage. Major advances in productivity will be limited in this stage; however, there are variances more apparent when looking at the individual operators.”

“Over the last two years, four of 30 top operators in the play have seen increases of 22 percent in median IP30 rates when reviewing the wells that they have brought online between 2012 and 2014. Generating estimates for expected ultimate recovery per well (EUR), based on the average well performance for the top and bottom operators, shows a difference of 850 thousand barrels of oil equivalent (mboe). The third quartile wells for Pioneer will produce roughly 1,200 mboe as compared to Murphy’s 350 mboe. These successful companies have focused the majority of their development activities in key core acreage counties (DeWitt, Lavaca, Gonzales, Webb, and Karnes), in which 226 wells out of 240 have been brought online in the final six months of 2014 for these counties. Looking at recent permit activity for these companies, 125 wells have been granted approval in the core counties, comprising roughly 92 percent of their new Eagle Ford well permits.”

Based on IP30 rates, the Eagle Ford shale play counties are divided into three tiers. The counties mentioned above make up the first tier. In total, 1,880 wells began production in the three tiers with the top tier coming in at 947 wells.

“Currently in the Eagle Ford, 61 percent of active horizontal rigs fall into the first tier of counties. The top tier of counties has seen an average rig count drop of 18 percent so far this year, compared to 49 percent and 146 percent in the other tiers,” Coll explained.

“Taking into account the average breakeven prices for these three tiers, it shows the varied states in which each tier sits during this challenged crude market. First-tier counties have shown resilience during this weak time and will still have positive returns. The second tier of counties offers scalable flexibility so that, as the market improves, favorable well economics gradually return, triggering rig mobilization and a return to development activity. Third-tier counties have a great deal of risk associated with them and may prove favorable if the market returns to levels seen before the collapse in the fourth quarter of 2014. However, they still rely on further optimization of development techniques to reduce costs or improve productivity for consistent economic dependability.”

For more information, follow this link to visit globaldata.com.