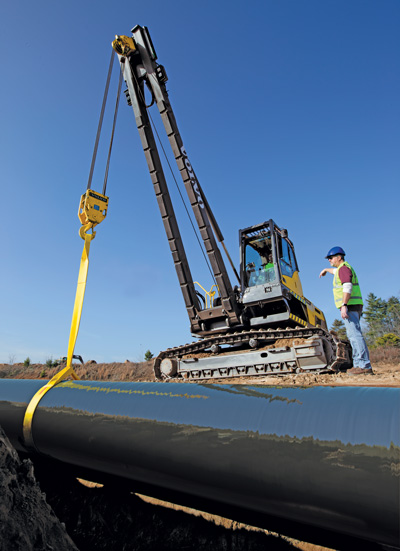 Volvo Supports Pipeliners Around the World

The company’s history of manufacturing machinery dates back more than 180 years. From the seeds of an engineering workshop founded in 1832, in the city of Eskilstuna, Sweden, Volvo Construction Equipment sprouted into one of the world’s largest manufacturers of construction equipment today.

During the 1800s, amid a flurry of inventive spirit in Sweden, three men — Johan Theofron Munktell and brothers Jean and Carl Bolinder — were responsible for developing a number of firsts for the country, including a mechanical harvester, a steam locomotive, a mechanically powered military submarine and a combustion engine. That innovative spirit has carried through to what is now Volvo Construction Equipment.

But it all started back in Eskilstuna, when Munktell, at the age of 27, was commissioned to start the Eskilstuna Mechanical Workshop, after an already prolific career as the foreman at Sweden’s Royal Mint, in Stockholm, during which time he modernized the minting machinery and designed and built the country’s first printing press. The Eskilstuna Mechanical Workshop was later renamed Munktells Mechanical Engineering Co. Ltd. In 1853, Munkell’s company developed a steam locomotive (called the “Firstling”). Munktell died in 1887, but the company went on to produce its first construction machine, a steam roller, in 1906, followed by Sweden’s first farm tractor in 1913.

Meanwhile, after Munktell left the Royal Mint in 1832, he was replaced by Jean Bolinder, who had apprenticed under the same engineering master as Munktell. In 1842, Jean left the Mint and along with his younger brother Carl traveled to England — just as Munktell had in 1835 — to learn about foundries, casting and engineering technology. Upon returning after a year in England, the brothers formed their own company in Stockholm. In 1883, the Bolinders participated in the development of the world’s first functional, mechanically powered, armed submarine. Ten years later they would build Sweden’s first combustion engine. In 1894, Carl Bolinder died, followed by Jean in 1899, but their company continued on into the 20th century.

Two important events in the late 1920s precipitated a major impact on the future of the Munktell and Bolinder companies. After two automobile enthusiasts shared a dinner and an idea, Assar Gabrielsson and Gustaf Larsson founded Volvo in 1927, when the company’s first car rolled off the line. From the beginning, safety was a primary principle for the company. Two years later, the U.S. stock market crashed and signaled the beginning of the Great Depression worldwide.

Already reeling from the depression, Sweden’s financial woes were compounded after the Kreuger Crash in 1932. The bank Handelsbanken decided to save its assets in the engineering industry and merged the Munktell and Bolinder companies into AB Bolinder-Munktell. After World War II, the future of the company was uncertain. The U.S. manufacturing company International Harvester nearly purchased the struggling AB Bolinder-Munktell, but instead it was Volvo that bought the company in 1950. The next two decades were a strong period of growth for Bolinder-Munktell, as the forestry and construction industries became increasingly mechanized. The company introduced its first wheel loader in 1954 and invented the articulated hauler during the 1960s.

Volvo renamed Bolinder-Munktell in 1973 as Volvo BM and abandoned the agricultural and forestry sectors to focus solely on construction equipment. In 1985, the company allied with American manufacturer Clark Equipment and its subsidiary Euclid. The product name Clark Michigan was shorted to Michigan and Volvo BM, Michigan and Euclid were incorporated as VME Group. After a series of acquisitions throughout the 1980s and 1990s, which expanded the company’s product line to include excavators and compact equipment, Volvo purchased Clark’s shares of VME and established Volvo Construction Equipment. Ever since, the company has continued to grow and expand its product offerings to the global construction market. 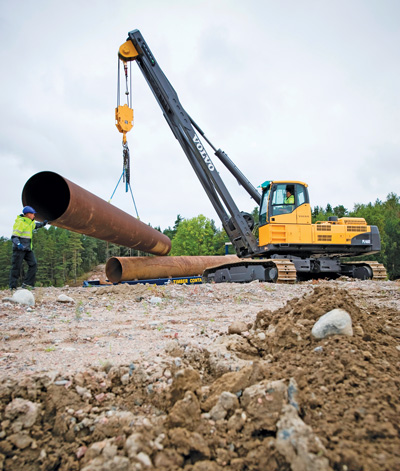 A focus on the oil and gas pipeline industry brought about the development of Volvo’s PL series of pipelayers, which are based on a hydraulic excavator platform. The innovative design won the company an award at the IPLOCA Convention in Sydney, Australia.

Pipelayers Reborn
Volvo Construction Equipment — or Volvo CE, as it’s often referred to as — has spent the last several years increasing its focus on oil and gas pipeline construction, culminating in the release of the company’s PL series of pipelayers in 2008.

Based on the Volvo’s hydraulic excavator platform, these pipelayers broke from traditional sidebooms by featuring 360-degree swing capability and the added versatility of being able to convert to a traditional excavator. Bolton says the PL series represents the first major advancement in pipelayer technology in decades.

“The rationale behind our pipelayers was in keeping with a tradition that dates back to the 1800s of being innovative,” Bolton says. “With the rotating pipelayers, what we call our ‘360 pipelayers,’ we wanted to provide quality equipment that was more versatile, so that it’s more heavily used, drives down the overall costs of ownership and above all is safe.”

In addition to increased versatility, the excavator-based platform makes the PL pipelayers easier to use from an operator’s standpoint, according to Lars-Inge Larsson, a customer solutions director with the Global Key Accounts Oil & Gas team at Volvo CE, who has been involved with the Volvo pipelayer concept from the very beginning.

“Understanding the specific project challenges is essential, as is fast delivery of the equipment contractors need,” Larsson says. In addition to on-site support, Volvo also follows up on equipment performance during the project. 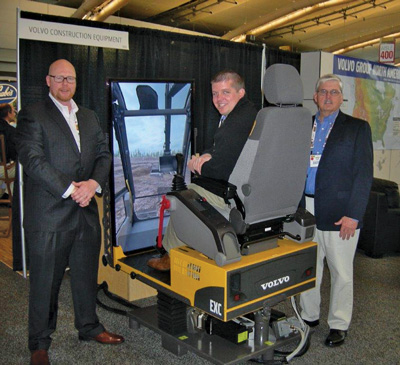 Meeting the Pipeline Market
Beyond just providing machinery to the oil and gas pipeline construction market, Volvo CE also participates in several of the industry’s associations and their conferences, such as the International Pipeline and Offshore Contractors Association (IPLOCA), whose annual convention is Sept. 23-27 in Washington, D.C. Volvo is a sponsor of the event and will be donating a car to be auctioned off to fund the association’s scholarship fund.

Being involved with these associations allows Volvo CE to better listen to customers and enables the company to develop and offer solutions to industry challenges and to improve equipment performance, according to Bernard Quereillahc, who (like Larsson) is a customer solutions director with Volvo’s Global Key Accounts Oil & Gas team and is responsible for developing the company’s oil and gas business worldwide.

“Associations such as IPLOCA provide the facility for networking and meeting the major players in order to be better able to understand the coming challenges the industry has to face,” Quereillahc says. “Volvo is also actively participating in the IPLOCA Novel Construction initiative. This initiative brings industry 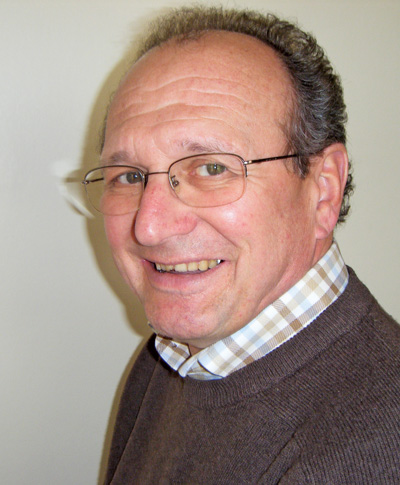 professionals together to improve the processes surrounding the laying of pipe, namely innovation in pipeline methods and technology. The goal is to improve efficiency, reduce environmental impact and mitigate the risk of accidents and injuries to those engaged in the construction process. This fits very well with the Volvo core values of safety and environmental care, in addition to raising the level of recognition for Volvo in the industry.”
Knowledge of the oil and gas pipeline industry helps Volvo CE address these customer’s specific needs, as pipeline contractors are a bit unique, says Bolton, referring to the speed, scope and geography of their work.

“There has been a trend in recent years regarding the financing arm of investing in pipeline infrastructure, where owning companies want to see a return on their investment sooner, as a result of what has been happening on Wall Street since 2008,” Bolton adds. “The industry has seen more regulatory delays in getting jobs approved. Contractors are having to hold to their finish date while getting squeezed on start date from the regulators. Contractors are under more pressure to do quality job in an ever shortening timeframe.”

As for the geography part of the equation, pipeline contractors often work in remote areas and in extreme working conditions, which Quereillahc says affects how Volvo CE must adapt to meet their needs.

“Equipment working hours are very high and response time to contractors’ requests can be very short,” he says. “They depend on a high level of service support to keep the line running. Remote locations result in a high dependency on local labor and the need for pre-screening and training potential operators before the project gets under way.”

Volvo CE must “be flexible and fast to keep up with customers’ transient service requirements, and more than anything we have to communicate on a more frequent basis,” Bolton says.

Driving the Business
Volvo has come to recognize just how large the oil and gas pipeline industry is, Bolton says. The so-called “shale boom” and continuing development of the Canadian oil sands are the main drivers behind the company’s growing oil and gas related business.

“I don’t think there’s any doubt the shale boom has awakened Volvo to the true opportunities and the size of this business,” Bolton says. “Over the last five years, with the advancements in hydraulic fracturing, we have seen results in the shale boom and the increase in planned infrastructure.” 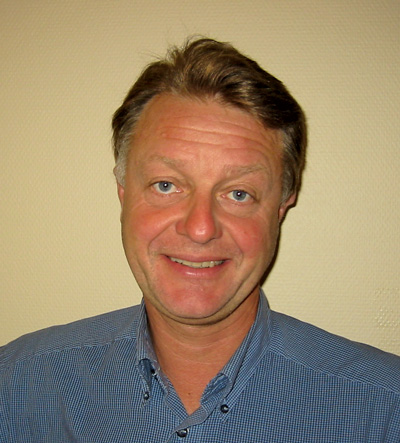 While the United States leads the development of shale oil and gas, Larsson says the boom is just at the beginning.
“Many more countries have shale deposits,” he says, “and energy needs will boost exploration.”

In addition, the development of crude oil supplies from Canada continues to stir interest in pipeline construction, such as TransCanada’s Keystone XL project, which awaits approval from the U.S. government.

“With the Keystone XL project in particular, I guess if you look at the total amount of work in the United States and Canada, it’s a big project and very meaningful for TransCanada, but it’s not make or break for the industry,” Bolton says. “The Keystone XL pipeline has been singled out a bit unfairly. It will be interesting to watch that development. Volvo is supportive of its completion.”

The Canadian oil sands in Alberta are the biggest development area in North America, Bolton adds. If pipelines are built to bring the crude south, they will be built to go east and west.

“The economics of energy are too compelling not to get built to take that commodity to market,” he says.

Bolton sees the need to update and maintain aged infrastructure as a primary driver for work in the industry. He also expects to see a bigger push to build interstate pipelines to move landlocked commodities in North Dakota and along the East Coast to market, as well as an increase in distribution pipeline work, as natural gas becomes more popular for powering vehicles.

“There is no doubt there will be construction as a byproduct of the need to transport natural gas products internally or to export facilities to ship gas all over the world,” Bolton says. “There’s a lot of construction work to come. There will be plenty of work for everybody. “