... Genie Shows Off Magic at Ride and Drive Event

Dark clouds swirled overhead. Royal blue booms reached into the sky as if to hold it up. While tornado warnings abounded in the Chicago area, more than 100 visitors joined Genie representatives on a humid spring day outside the K-1 Speed indoor go-cart facility in Addison, Illinois, a short drive from Chicago O’Hare International Airport.

Weather had delayed this editor’s arrival, but Genie delivered an impressive lineup of new telehandlers and aerial lift equipment that filled the parking lot for the manufacturer’s new Ride and Drive dealer event series. 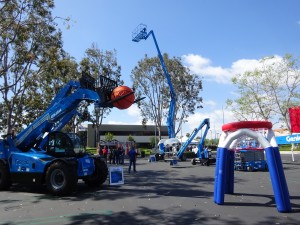 Clearly not taken in Chicago — it was too rainy for photos — but the Genie Ride and Drive dealer event showed off its newest equipment and featured a little fun for customers.

Genie is taking a road trip this spring to show off its newest equipment and to offer a hands-on introduction the machines. After launching eight new products to the construction market, primarily at February’s The Rental Show in New Orleans, the most ever released in a single year in the company’s history, the manufacturer is hosting a number of “pit stops” in cities across North America to offer rental customers the opportunity to learn more about its new products through demonstrations and also allowing them to operate the machines — all while enjoying a little bit of fun too.

In addition to the equipment, customers are being treated to go-cart racing at established facilities where the equipment will be co-located, a telehandler basketball “dunk” and food trucks. Go-cart racing winners will receive a complimentary pizza party for their entire branch.

“The Genie Ride and Drive event is a productive and fun way for us to spend time with our customers while giving them that hands-on equipment experience you can’t get from a trade show,” said Karen Stash, senior director of global marketing and product management for Terex Aerial Work Platforms, which manufactures the Genie brand. “We are thrilled about our new and innovative line of products and this is another way to promote the strength and success of Genie in the market while demonstrating firsthand how our machines can help people work safely and productively.”

Showcased at the events are the GTH-636, GTH-1256 and GTH-1544 telehandlers; the GS-4047 scissor lift; the Z-33/18 and Z-62/40 articulated boom lifts; the Terex AL5 light tower with vertical mast option; and the new Genie SX-150 telescopic super boom lift (making a special appearance at select locations). The equipment is available to operate and product experts are on site to explain the capabilities and benefits and answer any questions.

The Genie GTH-1256 and GTH-1544 telehandlers are particularly popular in the oil and gas sector, according to Scott Owyen, global training manager for Terex Aerial Work Platforms. The heavy-duty lift and carry capabilities are ideal for transporting pipe and other materials around the jobsite.