What seemed like an ordinary natural gas transmission pipeline project for Gabe’s Construction Co. Inc. last year turned out to be anything but.

As the Sheboygan, Wisconsin-based contractor continues drilling forward into its 76th year of continuous operation since being founded by Jacob Gabrielse in 1942, Gabe’s Construction embarked on a project in the fall 2017 that looked relatively straightforward on plan and profile paper.

However, as most are aware in the construction industry and especially the pipeline horizontal directional drilling (HDD) industry, work is rarely as simple as it seems.

Through teamwork and communication with the general pipeline contractor, Foltz Welding (Patoka, Illinois), the pipeline operator, Gabe’s nationwide network of materialmen and vendors, as well as its field and office staff, Gabe’s was able to overcome five distinct obstacles and successfully pullback 2,495 lf of 24-in. diameter, 0.5-in wall thickness, abrasion resistant overcoating (ARO) treated steel pipe. The pipe was installed up to 100 ft below surface, crossing 610 lf of the shallow Wabash River, multiple local levees and an active railroad in soil and rock geotechnical conditions in western Indiana.

The pipe-side of the crossing was 155 lf lower in elevation than the high side. Therefore, Gabe’s set its American Augers DD625 main rig on the pipe-side (lower) for piloting activities, then moved it to the high side for pull reaming and pipe pullback. 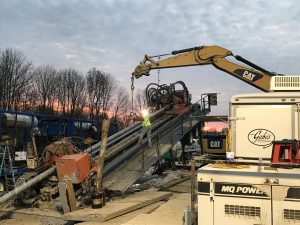 The initial concern arose when the local landowner moseyed over during rig setup and stated, “I hope this field doesn’t flood 3 ft deep like it did the past two years right about this time. I’m hoping to get a soybean crop finally.”

Thankfully, the work area remained unflooded. However, three of the five obstacles did occur during the pilot operations.

First: It was observed that soil conditions were more variable than shown, and Gabe’s encountered difficulty maintaining full drilling fluid returns back to the rig while piloting along the design profile. Unfortunately, drilling fluids started coming to the surface in an upland area on the far side of the river away from the rig. After containing, pumping and trucking fluids back to the rig side for some time, approval was given to abandon the 1,413 lf of pilot hole completed in soil and re-design the profile to enter the rock layer sooner to provide additional overburden cover.

Second: At the deeper alignment, Gabe’s encountered a layer of expansive and naturally pressurized material that allowed drilling fluids to be absorbed into the surrounding soil, then was observed returning to the entry pit shortly after operations were shut down for the day. Gabe’s held crew members on site overnight to maintain and store the returning fluids until the returned flow minimized. This cycle would result in upwards of 31,000 gallons of drilling fluids, approximately the amount noted absent during operations, returning from the surrounding soils back into the entry pit within a 24-hour period.

Third: Even with the deeper alignment, drilling fluids were especially determined to follow existing pathways of least resistance and continued to surface in the upland area on the far side of the river. The pipeline operator, Gabe’s and Foltz determined that the best course of action was to continue forward with this pilot alignment and install a fluid return line from that location back to the rig. Permitting a new HDD installation of a small diameter HDPE was too time-consuming. Luckily, an abandoned 16-in. steel pipeline river crossing was within the same right-of-way and owned by the same operator. With permission, Foltz excavated, benched downed to and opened the abandoned pipe on both sides of the river, and Gabe’s mobilized a Vermeer 36×50 to rod through and pull in a 1,200 lf, 6-in. HDPE pipe. Drilling fluids were then able to be pumped through this 6-in. HDPE pipe, back to the rig’s recycling unit.

The pilot was then successfully completed. Rock conditions were encountered at 933 lf from the entry and ended 92 lf short of the exit. This resulted in 1,470 lf of the HDD to be in rock.

Due to the setbacks during piloting, Gabe’s began reaming on a 24-hours-per-day, 6-days-a-week basis to maintain the overall project schedule. The 24-in. reaming was completed without further issue. 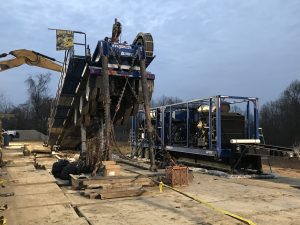 The fourth obstacle was purely permit driven and encountered during the 36-in. ream. 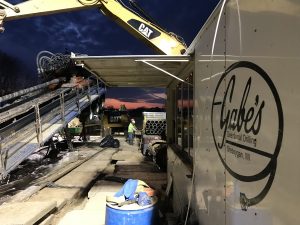 The fifth and final obstacle concerned the 555 lf of dry-hole pipe and the 155 ft of elevation differential during pullback.

Typically, an HDD of this length and diameter would warrant internal water buoyancy modifications to reduce external friction forces. Gabe’s was initially concerned that internal buoyancy would be detrimental to the pipe once the pull-head was significantly above the string-out elevation.

With the effects of gravity on the buoyancy water and no release for the air trapped in the 555 lf of pipe between the pull-head and ahead of the buoyancy water, an internal vacuum could potentially be formed. Both Gabe’s and the pipeline operator completed calculations that alleviated anxiety of pipe failure due to buoyancy water vacuum. Gabe’s decided to pull pipe without buoyancy.

Erring on the side of caution and based on nearly 20 years of HDD experience, the company had all equipment and materials (Adler tanks, pumps, HDPE) ready to quickly introduce buoyancy water if pull forces exceeded comfortable levels. Ultimately, buoyancy was not needed as forces were maximized at 43,000 lbs, even though the final 22 percent of the HDD was dry-holed.

Time and time again, Gabe’s understands the underlying catalyst for a successful project is the pre-planning and continuous communication and support between all parties and personnel involved. Specifically, for this project it included Gabe’s Construction director of HDD operations Steve Huibregtse and foreman operator Matt Baumann, Foltz Welding’s Dan Hauschel and Scott Schoonover, the pipeline operator and each party’s various field and office support personnel. Planning and communication have a direct influence on the outcome that all HDD contractors strive for: a clean hole, the safe return of all employees to their family, a contented customer and a flawlessly smooth pullback.

Nathan Eastway, P.E. is vice president of HDD and specialty projects at Gabe’s Construction Co. Inc. The 76-year-old company is based in Sheboygan, Wisconsin