... Filling The Gap in Orbital Welding

Filling The Gap in Orbital Welding

Joining two pieces of tube or pipe by following the arc around the circumference is arguably the most difficult type of welding there is. In addition to being very physically demanding, this type of welding requires great skill and control. If a welder can weld tube and pipe in position, he or she can weld almost anything.

But, even with the current high demand, it’s no secret that these highly skilled, qualified welders today are hard to come by. The good pipe and tube welders who know their stuff usually have been in the same jobs for 40 years. But for many people just entering the field, formal training actually has been their starting point. Unlike years ago, when training in the skilled trades was a way to improve skills first picked up in the family garage, today’s younger welders frequently have only minimal experience upon which to build.

Fortunately for industry, and for welders at both ends of the spectrum, technology is bridging the experience gap and at the same time taking a lot of the physical difficulty out of orbital welding.

What makes orbital welding so difficult? In addition to basic challenges of maintaining the right distance and alignment, orbital welding requires the welder to adjust continuously. A skilled welder with years of experience may make it look easy to follow the joint as it goes from being horizontal to vertical, then overhead and back to vertical, but it’s not.

Part of the difficulty welders face in general is the difference between knowing what has to happen to make a good weld and being physically able to do it. Education and experience can prepare a welder to know what is needed to make good welds. But welding traditionally requires good hand-eye coordination too, and that in turn can be affected by fatigue.

This is where mechanized orbital welding systems shine. By automatically controlling much of the welding operation, orbital equipment allows you to make good, repeatable welds all day long. Instead of lying on your back with your arms at an impossible angle, you simply hold the control pendant and watch the arc. It takes a lot of effort out of the process, but it still takes full advantage of your skill. And these mechanized systems let you make the same good weld at 4 p.m. that you did at 8 a.m. 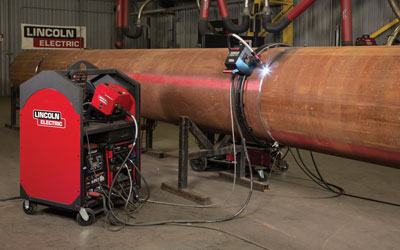 By automatically controlling much of the welding operation, orbital equipment allows you
to make good, repeatable welds all day long.

Orbital welding systems generally become cost-effective when working with 18-in. diameter and larger pipe. Although improved productivity is one benefit of switching to a mechanized system, the real advantage it offers is consistent quality.

If you are considering an orbital welding system, here are six things you should investigate:

1. Ease of use. The whole idea behind mechanized orbital welding systems is to make it easier for the operator — the welder, highly experienced or not — to make excellent welds. The most effective orbital welding systems put the controls for key parameters in the operator’s hands and relieve him or her of more mundane responsibilities. For example, more advanced systems have automatic height control to follow the contour of the pipe. That allows the operator to focus on steering, watching the puddle, and fine tuning speed or power as needed. And all of that now can be done free of ergonomic distress.

At the same time, welders don’t want a 40-lb pendant with scores of buttons and knobs. They want a controller that’s lightweight, intuitive and easy to use. Typically, icon-based controls that people can recognize without having to read any explanatory text are well accepted.

2. Smooth movement. Weld quality is directly related to how smoothly the torch moves as the weld is being made. Feedback mechanisms within the system control the weaving action, which is often called for on larger welds, and maintain the height of the torch above the weld puddle. Those controls generally are built into the tractor itself, also called the weld head and sometimes the “bug.” But the track also affects how smoothly the torch moves. For example, some orbital systems roll on a very smooth track while others do a crab walk around the pipe.

3. Precise control. The drive system and steering system also affect the operator’s ability to maintain weld quality. Ball-and-screw-type steering systems offer far more precise control than rack-and-pinion-type systems, for example.
To get a sense of the difference this can make, think about auto racing — a Cadillac is a fine automobile, but you wouldn’t want to put one on a high-speed race track where high-performance, precision steering is a must.

The software controlling the system enters into the picture, as well. Selecting high-performance components is important, but it’s the software that takes the feedback from the motor and the torch and processes that information to implement automatic height control, for example.

The bottom line: Systems that use premium components enable the operator to move the torch as precisely as he or she wants to — or needs to.

4. Ease of setup. In comparing alternative orbital welding systems, be sure to go through an actual
setup. Some systems use screw connections to fasten the track to the pipe. While they are adjustable, they also are slow to set up. Other systems use quick-release connections that can trim a lot of time off repetitive setups, while also allowing for adjustment. You just put the track on the pipe, clip it in place, and you’re done.

Beyond the track, take a hard look at other system components. Some systems are designed specifically for portability and ease of setup, allowing an operator to set up and begin welding in less than five minutes. Others typically require 20 to 30 minutes for aligning the track and getting the system set up to weld. Less costly systems often are also heavy and unwieldy. Working through your anticipated setup costs may show that a more expensive system will quickly make up the difference in labor savings.

5. Flexibility. Even low-end orbital welding systems are not cheap, but some offer significantly more flexibility than others in how they can be used. Before making your selection, find out if the bug can be used in more than one position and what adjustments are required to make the switch. Some equipment requires you to turn over the bug and adjust the wheels for such changes. But at least one system is available that can go directly from orbitally welding a stationary pipe, a 5G setup, to being a stationary torch with a rotating pipe or 1G rotated without adjustment.

6. Integration. As systems have become more heavily dependent on software, the importance of system integration has grown significantly. Today users who cobble together systems using components from different manufacturers take on much more risk than they did years ago. Why? Because progressive manufacturers are not looking to sell equipment that will be obsolete in two years. Rather, they’re looking to provide buyers with equipment they’ll be using years from now, with new and enhanced software-driven functionality. And they’ll be thinking, “Wow, this is even better than it was before.”

As a result, however, this more sophisticated, proprietary-software-based approach frequently increases the difficulty of integrating disparate components. More than ever before, considering a single-source system makes good sense.

Finally, beyond software concerns, consider the other factors that play a role in the success of your welding operations. Even the best equipment is only part of a total solution, one that may include consumables, technology resources and support in both the field and the office — which increasingly requires a global presence. Fortunately, this industry has strong manufacturer support, which is yours for the asking. The challenges have never been greater, but neither have the possibilities.