On any pipeline project there are a myriad of cost factors that a contractor must consider. One near the top of that list is fuel.

Think about it for a minute. When heading into a project, a contractor’s equipment costs and personnel costs are generally understood, and they comprise the two greatest expenses on any given project. Key to getting people and equipment from the yard to the project and working, is fuel. By some estimates, fuel can be the third greatest expense for a contractor. It also represents a cost factor that can fluctuate depending on the location, weather, length of a project and other socioeconomic factors.

Aside from the cost aspect of fueling the pipeline construction equipment, it can also be a logistical nightmare. A contractor, nor the community where the work is taking place, does not want a train of workers pulling their super duty work trucks into the local Speedway or Citgo station. Those stations have one — maybe two — diesel pumps and most don’t have off-road diesel fuel available. And, because many of these large projects are in more rural areas, the stations are not adequately designed to accommodate large trucks and trailers.

To help alleviate what could be a project-long headache, companies like Michigan-based Beard Oil Distributing have built a business out of delivering fuels to pipeline projects. While there are several companies servicing the industry, there are some considerations a contractor should make before deciding on a supplier.

“[We look at] reputation in the industry, both safety and service, as well as environmental management, quality and age of equipment and finally cost and pricing,” says Chad Wagner, warehouse foreman, Minnesota Limited. “What we have learned is that a company may be able to provide a slightly lower cost service, but if you can’t get the fuel out of the tank and into the vehicle, or worse yet run out of product, the resulting loss of time and production costs will quickly over run the lower pricing.”

“Contractors want a fuel supplier they can trust; they need to be able to rely on fuel being in their tanks when they need it. They are looking for track record of performance, quality dispensing and storage equipment and fair pricing,” says Schwartz says, adding that the company’s bulk fueling customers have included Minnesota Limited, Henkels & McCoy, Price Gregory and Michels Corp., to name a few.

Wagner notes that the benefits he has seen from working with Beard Oil is the ease of setup and use, and the reliability of the fueling system and delivery of fuel to the project site. This also extends to the delivery of DEF and lubricants from Beard Oil.

“First, and most important, the service they have provided historically with our company and second would be the level of professionalism both in customer service and equipment,” says Wagner. “[There are] no corners cut and no concerns gone unheard.”

North American Oil & Gas Pipelines (NAOGP) recently had a chance to visit a project site in Pennsylvania to see a bulk fuelling system in action. We also had the opportunity to discuss some key points of a bulk fueling strategy with Schwartz. 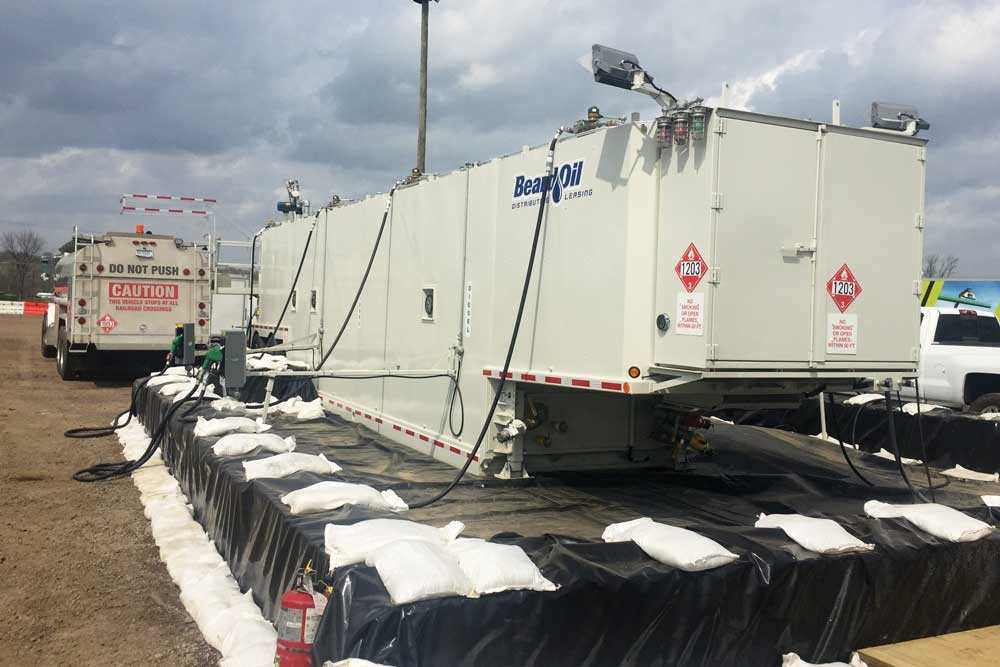 Beard Oil has designed a specialized, remote, temporary bulk fuel dispensing tanker, which is designed to provide contractors with the safest and most efficient portable fueling equipment in the industry.

NAOGP: What are some considerations a contractor should make when looking at fuel for their next project?

SCHWARTZ: Trends in the marketplace that may impact the price and availability of fuel. Fuel prices are impacted on a global basis and unrest in certain regions of the world can have an influence on domestic prices. As a contractor bids their next project, they should consider stability or lack of stability on global markets.

As the United States has emerged as a leading energy producing nation, the fluctuations in fuel prices has been much less or not at all even when world events, particularly in the Middle East, occur. The most recent example, at least to this point has been the seizing of ships and unrest by Iran in the Gulf. Their aggressive activity and threats to shipping have not influenced our fuel prices. I believe this is largely due to energy independence we have achieved in the United States.

Many contractors will have provisions in their contracts that allow for escalators for fuel costs should a big event occur that would dramatically impact costs. Some locations where these projects take place are remote, this will impact the cost of transportation of fuel and availability.

NAOGP: What should a contractor look for when looking for a bulk fuel service provider?

SCHWARTZ: I believe fuel availability in the tanks has been taken for granted by the contractors. If they looked behind the scenes to see what goes on the to make the fuel appear in the tanks, they would see a complicated and often stressful operation.

I liken it to air traffic control, where we as passengers just take for granted that planes will take off and land without incident like colliding into each other. We monitor fuel use per product, per each tank, per each contractor while establishing their consumption trends and looking at the impact of weather. This makes for a detailed and precise operation.

The fuel is ordered the day before it is delivered and then each load has to be monitored to make sure it gets where it is needed on time. The contractor never sees this part of the operation that keeps their tanks full.

NAOGP: Is there a certain size project that benefits from a centralized bulk fueling system vs. filling everyday at a gas station, smaller tanker truck or a truck bed mounted tank?

SCHWARTZ: Bulk fuel in a fueling system like ours provides its biggest benefit for main line projects. Projects that are installing pipe for 10 miles or longer. Type of terrain and size of the pipe being installed are also factors to how much fuel would be used. Typically, we don’t see large bulk units like ours on integrity, repair or station type work. Although, 10 miles of pipeline work in the mountains can be a big project so everything involving the project needs to be considered to match up the best fueling equipment to get the best result for the contractor.

NAOGP: How can a system, like what Beard Oil offers, benefit a contractor?

SCHWARTZ: Benefits of the Beard Oil system are many. The ability to purchase fuel in bulk represents a cost savings when compared to fuel station retail. The contractor can control who gets fuel and when. It also keeps workers out of local gas stations which can cause traffic congestion and lost time.
There is the safety factor when the fueling process can be controlled. Fuel dispensing into the contractors’ large trucks and equipment is much faster and safer when done with equipment specifically designed to meet these challenges. For larger projects, huge amounts of fuel are used so having fuel stored in bulk ensures the fuel will be available when it is needed.

The contractor does not have to install or maintain the fueling tanker, Beard Oil crews set the equipment up and take care of it during the project. Once the project is complete, the tanker is a mobile trailer and easily removed and taken to the next job.

NAOGP: A fuel system like this takes advantage of bulk purchasing. Are there other areas where a contractor on a large project should consider bulk purchases?

SCHWARTZ: In addition to our fueling system, Beard Oil distributes Phillips 66 bulk lubricants and diesel exhaust fluid (DEF). We offer specialized storage and dispensing trailers for the contractors that keeps the products protected and is safe and easy to dispense from. These oil and DEF trailers allow the client to save costs by purchasing in bulk.