The nationwide “I Make America” Harley-Davidson tour made a stop in Lebanon, Ohio, where manufacturer Fecon Inc. hosted the contingent of industry supporters. 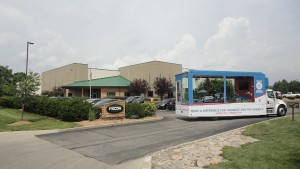 Fecon Inc. hosted the “I Make America” Harley-Davidson tour at its headquarters in Lebanon, Ohio.

On behalf of the Association of Equipment Manufacturers (AEM), “I Make America” and its more than 30,000 supporters advocate for pro-manufacturing policies to create more jobs in the United States and keep the economy competitive with other countries.

The campaign has taken to the open road in a uniquely designed truck with glass sides. The tour stopped at Fecon headquarters in June.

“We at Fecon strive for greatness with every product we create,” said Fecon president John Heekin. “It is important to the manufacturing industry as a whole to make every effort to bring this country’s economy back to its highest strength and excellence. The ‘I Make America’ program epitomizes support for our industry, economy and country as a whole, and AEM is the backbone behind these efforts. AEM is coming here to encourage the public to draw the attention of government representatives to serious issues affecting the manufacturing industry.”

The purpose of the Harley tour is to raise awareness about “I Make America” and its mission, as well as to engage AEM member companies and their employees to help make a difference.

“‘I Make America’ was created to be a force for positive change in the equipment manufacturing industry,” said AEM president Dennis Slater. “Economic conditions in America remain a challenge and we need our government to partner with us to advance pro-manufacturing policies that address those challenges. ‘I Make America’ is our platform to spread awareness and maximize our voice in Washington, D.C.”

According to AEM, about one in six private sector jobs in the United States depend on the manufacturing base. The association believes Congress can help create business conditions that will grow the economy and U.S. manufacturing jobs by encouraging infrastructure investment, protecting U.S. farming and increasing American exports.

Everyone who signs up through Oct. 3 has a chance to win a 2014 Harley-Davidson Road King, featuring a custom “I Make America” paint job. Visit imakeamerica.comto enter or for more information about the campaign.