Fabick and FABCO are getting the band back together. The two family-owned, independently operated companies share a common history and now have been reunited. 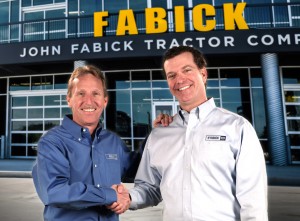 Jeré Fabick (left) will become president of the combined organization and Doug Fabick (right) will be CEO.

Doug Fabick, dealer principal of John Fabick Tractor Co. (aka Fabick Cat), based in Fenton, Missouri, and Jeré Fabick, dealer principal of FABCO Equipment Inc., of Milwaukee, Wisconsin, finalized a deal to combine the companies on July 1, according to a joint statement. Bringing the two Cat dealerships together continues a shared heritage that dates back to 1917 when John Fabick Sr. founded the first Fabick Co. in St. Louis.

The expanded organization is being led by Doug Fabick as CEO and dealer principal along with Jeré Fabick serving as president and co-dealer principal. Headquartered in St. Louis, the combined enterprise operates in a six-state region including major portions of Missouri and Illinois, one county each in Kansas and Oklahoma, the Upper Peninsula of Michigan and the entire state of Wisconsin.

Concurrent with this change, the entire enterprise came together under a common identity that features the Fabick Cat name. Fabick Cat capabilities now include more than 1,100 employees, with 550 professional service technicians, 37 locations with 200 service bays and a fleet of more than 200 service vehicles.

As family-owned businesses spanning five generations, Fabick Cat has a very straightforward philosophy; treat people with respect, focus on building long-term relationships, and always provide superior value. A new chapter in this legacy has begun and will further strengthening the company motto: “To Ever Serve Our Customers Better.”