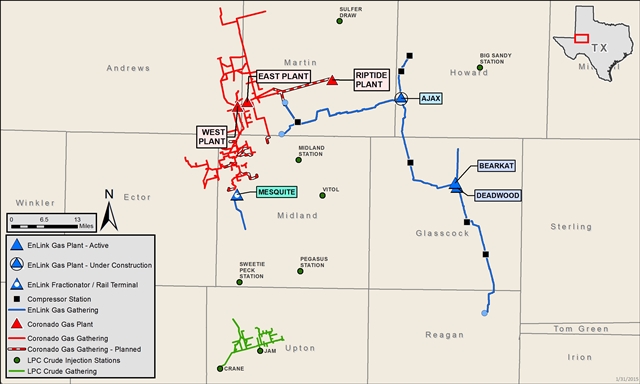 Construction of an additional 100 MMcf/d of processing capacity and gathering system expansions of the Coronado system are currently underway. Coronado’s key assets have been constructed within the past five years and the system has current inlet volumes of approximately 100 MMcf/d.

EnLink plans to connect the Coronado system with its Bearkat system to create a multi-county rich gas gathering and processing system to create optimization opportunities for its customers and its product marketing services.

“This transaction builds on EnLink’s growing midstream platform in West Texas,” said Barry E. Davis, EnLink president and CEO. “The Coronado assets are located in the core of the North Midland Basin and are supported by the region’s most focused and active producers. By combining Coronado with our recent LPC acquisition and our existing footprint, we have the opportunity to create tremendous value for our producer customers by linking our gas gathering, processing and crude oil logistics operations to provide a full-service midstream solution.”

The Coronado system is underpinned by long-term contracts, which include the dedication of production from over 190,000 acres. Coronado’s key producer customers include Reliance Energy Inc., Diamondback Energy Inc., and RSP Permian Inc. Reliance is currently the largest owner of Coronado, with affiliates of both Diamondback and RSP Permian owning the remainder of Coronado.

“In just over four months, we have announced approximately $1 billion of acquisitions, which is consistent with our growth strategy to expand our platform in key producing areas,” Davis said. “EnLink is a strong vehicle for sustainable growth, due in large part to our current financial position, which allows us to effectively expand in times like these.”

Economics in the North Midland Basin are among the most favorable of all oil-producing regions in the United States. The region has seen a rapid transition to horizontal drilling, with producers targeting the Lower Spraberry, Wolfcamp B, and Wolfcamp D zones among other prospective intervals. Recent well results from Coronado’s producer customers, as well as other producers, indicate outstanding resource potential in the area.

“We have assembled a strong acreage position in the North Midland Basin that will continue to serve as a key driver of production growth for many years,” said Travis D. Stice, CEO of Diamondback and Viper Energy Partners. “We are excited about the development potential for multiple horizontal targets within the area that has and will continue to serve the Coronado system in the future. We have been involved with Coronado since its formation and grown together as business partners. We look forward to working together with its new owners to support each other’s growth aspirations.”

“Reliance has been focused on expanding and de-risking its acreage around the Coronado system since 2007,” said Reliance President Gary D. McKinney. “We believe we are located in some of the best areas of the Midland basin and we’re excited about our recent horizontal well results in the region.”

“RSP Permian has built a premier acreage position in the Northern Midland Basin that will continue to serve as a cornerstone to our strong production growth and attractive rates of return,” said Steve Gray, CEO of RSP Permian. “We have relied on Coronado throughout our development and look forward to working with its new owners in the future.”

EnLink expects the acquisition of Coronado to be neutral to distributable cash flow per unit at both the EnLink Midstream Partners and EnLink Midstream LLC in the near-term given the current market environment and taking into consideration the producers’ current drilling plans. Over the next few years, EnLink expects increased activity around Coronado’s system will generate significant accretion in distributable cash flow per unit.

EnLink expects its total investment will be approximately seven to eight times Coronado’s adjusted EBITDA with the timing dependent on the recovery of commodity prices and an increase in producer activity, taking into consideration expected additional capital investments of $400 million to $600 million. This does not include synergies with EnLink’s existing Permian assets and the potential for expansion of the combined systems by securing new customers or additional dedicated acreage.