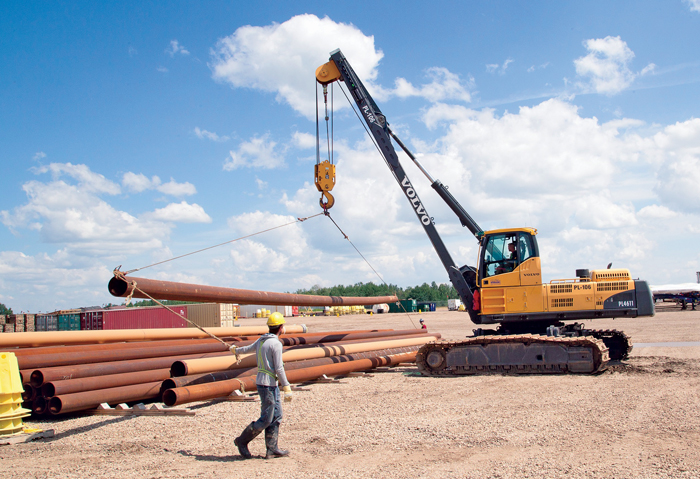 Often inevitable in today’s busy marketplace, innovation and change are not always appreciated by everyone. Many still adamantly subscribe to the theory; if it is not broken, do not try to fix it. Even the smallest paradigm shifts do not always come easily.

However, that is not the thought and action patterns embraced and executed by Brian Surerus and his team at Surerus Pipeline Inc. With its headquarters in Fort St. John, British Columbia, designated the Energy Capital of B.C., Surerus is strategically located in the heartland of gas and oil exploration and production in Canada.

For this group of entrepreneurs, opportunity abounds, as Canada is the sixth largest oil producing country in the world and is the single largest source of oil imports into the United States.

From Humble Beginnings
Surerus started the company in 1969 by trading his used pickup for an even more used dump truck. He then added a used excavator and trailer by way of a rent-to-own arrangement with a friend.

“In the beginning it wasn’t easy. I started out in nearby Taylor B.C. hauling gravel for a local contractor and doing road maintenance for the highways department and when that business slowed down, I worked for Union Oil cleaning out drainage ditches,” said the quiet spoken, genteel Surerus. “A year or two later I got the opportunity to bid on a local pipeline project and to everyone’s surprise my little company was successful in winning the contract.” 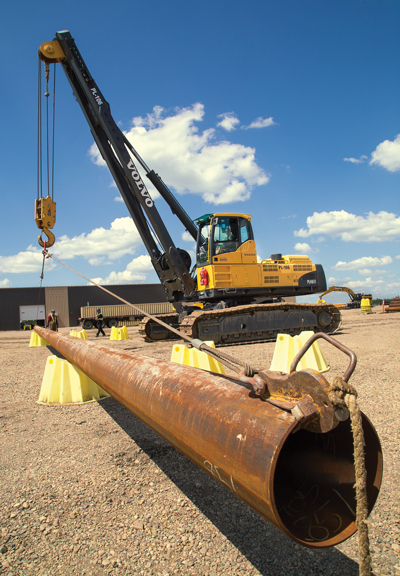 Oil and gas exploration and production in this part of Canada was in its infancy at the time with the first oil and gas discoveries just a decade earlier. Changes in federal and provincial governments had great influence on the ebb and flow of the industry.
In 1976, Surerus was encouraged by the optimism shown by the oil and gas sector and invested in four pipeline specific machines, and Surerus Pipeline Inc. was born. Surerus fell in love with the pipeline business, and it is the only thing he and his company have done.

Today, Surerus Pipeline Inc. is still family owned and is the largest company of its type in British Columbia and one of the top ranked pipeline installation companies in North America.

Leading Edge
Although the demand for oil and gas has dramatically increased on a global basis, the machinery and methods used to extract it and get it to consumers have remained somewhat unchanged over the years.

The introduction of fracking, the hydraulic fracturing of rocks and rock formations by injecting fluid into cracks forcing them open and SAGD or Steam Assisted Gravity Drainage are two of the more recent innovations employed by oil and gas companies enabling enhanced extraction and production.

Despite these advancements, operational change within the pipeline installation industry has remained some-what sluggish.
However, the very mechanically orientated Surerus has worked diligently to not only grow his company, but to keep it on the leading edge of technology. He does not subscribe to the “if it isn’t broken” theory and has, along with the Surerus team, modified many of the traditional pipeline installation machines to out produce their original design capacity. In many areas of Canada, pipeline crews must deal with rock hard, frozen conditions in winter, which will then revert to swamp and muskeg in the summer.

Surerus has also kept a close eye on the latest trends in the heavy-equipment industry, especially if it has anything to do with the pipelaying world. So when Volvo Construction Equipment (VCE) introduced its revolutionary line of excavator-based, fully rotating pipelayers, the first major innovation to pipelayers in almost 80 years, he made it his business to check them out. 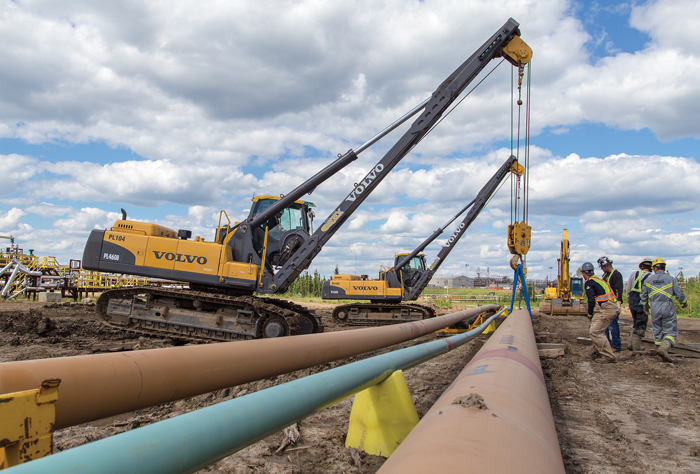 Although somewhat skeptical at first, Surerus had trusted his longtime friend Rusty Stevenson, now a territory manager for local VCE dealer Great West Equipment. He was also aware of the superior performance characteristics of Volvo’s construction equipment because of having recently added several pieces, including eight Volvo articulated haulers, four excavators, a motor grader, a pair of skid steer loaders as well as two Volvo compactors to the company’s ever-growing heavy equipment inventory.

In mid-2012, Surerus took delivery of its first Volvo PL3005D. Not withstanding the excellent quality of the manufacturing, this new pipelayer did come with paradigm shift challenges for both operators and customers alike.
In a very short period of time, Surerus has proven that his decision to add the Volvo pipelayers to his inventory was the right one. In the months following, the company has added seven more units including two additional Volvo PL3005D models, three Volvo PL4608 models and two Volvo PL4611 units.

“They are safe, efficient, purpose-built machines that are superior to traditional side-boom units for many applications,” Surerus said.

World First. First Class.
Just south of Fort McMurray, Alberta, in the heart of the Athabasca Oil Fields, Surerus is successfully working on another innovative projecct — a first in North America.

Here, on the Kinosis SAGD bitumen recovery site of Nexen Energy ULC, Surerus, in cooperation with France-based ITP InTerPipe SA is installing more than 10 km of heated and insulated pipe-in-pipe (PiP). This particular project entails the installation of three pipelines, two of which are thermal traced, CSA approved PiP.

The Kinosis project is the first time this ITP PiP technology has been used exclusively for a land-based pipeline and is the only one of its kind in North America to have an inner heat component. The inner pipe has a series of heating wires fixed to it facilitating minimal heat loss for both the outbound hot fluids line and the inbound fluid recovery line.

Installation of this “new” technology did not come without its own set of problems.

First, the pipe had to be assembled and for this Surerus built a 30,000-sq-ft (2,787 sq m) facility in Gibbons, Alberta. Here a pair of Volvo pipelayers was used to stack the single pipe, move it into the manufacturing facility and load the finished product for delivery to the installation site.

Second, once on site this “double the weight” pipe had to be carefully unloaded and moved to the trench. Since this PiP cannot be bent in the traditional manner, there are many places where the trench must be dug much deeper. For this deeper trenching Surerus purchased a Volvo 700C tracked excavator.

Pipe weight and installation reach are not issues as Surerus is using both Volvo PL4608 and PL4611 rotating pipelayers with their respective tipping capacities of 80 and 110 tons and onboard load management system. Where the trenches are deep, operators appreciate the hydraulically elevating cab on the PL4608 (or fixed, raised cab on the PL4611) for the increased visibility it provides.

Veteran operator Rick Gould is very pleased with the performance of the Volvo pipelayers.

“After years of operating a traditional side boom machine, these took a little bit of getting used to. They were, simply put, different. But now I love them,” he said. “They are versatile, you can literally off load the pipe and swing it 180 degrees to the trench and you can’t do that with a side boom.”
He went on, “Operator visibility is outstanding making it safer for both the operator and the on-the-ground crew. It has superior reach and the onboard load management system is fantastic. And the cab, who wouldn’t like it? Air conditioning, heating and a stereo. This is a first-class machine.”

Paying Dividends
Back at the Surerus head office, company vice president Sean Surerus is pleased with both the performance and the reaction of their customers to the Volvo pipelayers.

“I was a bit unsure at first,” he said. “But in reviewing the daily workflow and production I can really see the benefits of this innovative technology. Our customers were curious to see how these machines would per-form. They see the versatility and safety and they eliminate the need for a crane for unloading and moving pipe enhancing the bottom line. Many now want to make sure that the Volvo machines are available for their job. So it’s a win-win that’s paying dividends for everyone.”