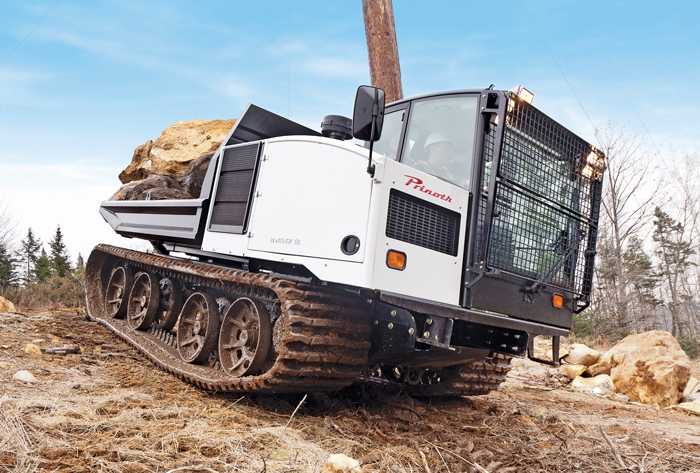 Through the slop and across mucky terrain, the postman’s creed comes to mind. “Neither rain nor snow, nor sleet nor dark of night shall stay these couriers from the swift completion of their appointed rounds.” The same should be said of crawler carriers on a pipeline right of way.

These track-driven multitaskers have been around for decades, but pipeline contractors are starting to find them invaluable tools on the jobsite, according to Mike Crimaldi, president of Rig Source Inc. and Terramac. Crawler carriers were the first choice to carry mats onto project sites to create more stable working environments for larger construction equipment. Their ability to access any terrain made them the ideal tool for such work, but that same quality is now compelling contractors to find other tasks for these machines.

Terramac is a newer manufacturer, having grown out of Rig Source Inc., which started in 2004 as a rental, repair and support vendor for drilling contractors in the United States. The company specializes in installing drill rigs on used carrier platforms. A couple years ago, Crimaldi saw an opportunity to dive into manufacturing crawler carriers for the U.S. market. The Terramac RT9 offers an easy-attach mounting system on the front and rear of the unit for a variety of configurations and applications. 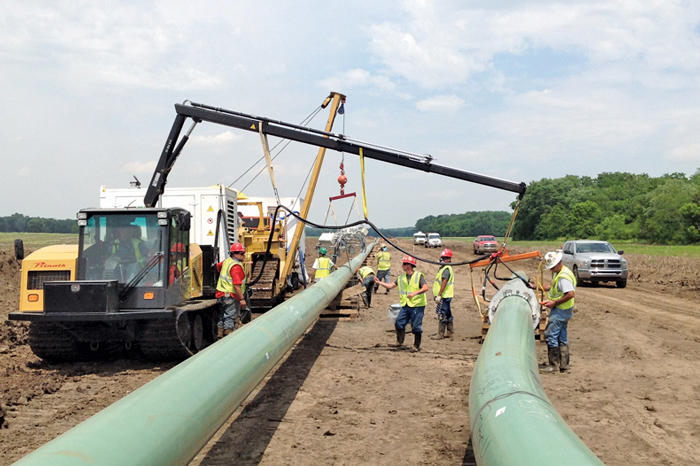 Crawler carriers can be outfitted with a variety of tools to assist pipeline construction. The machine’s low ground pressure allows them to perform heavy lifting with minimal environmental damage.

Interchangeability between different tools has become one of the main drawing points for crawler carriers, according to Doug Little, director of sales at Prinoth. While carriers don’t feature quick-attach couplers like a skid steer or hydraulic excavator, the machines can switch between tool platforms in a matter of an hour or two.

Prinoth manufactures a wide range of tracked utility vehicles and equipment for the construction market, including its North American-made Panther series of crawler carriers that are specifically aimed at the oil and gas sector. Last year, the company celebrated its 50th anniversary.

Aside from carrying mats, crawler carriers are now being used on oil and gas construction projects on applications such as welding, drilling, site investigation and material handling. The versatile machines range in price from $100,000 to $400,000, depending on specs, features and tool mounting choices.

Low Impact, High Versatility
One of the major selling points of crawler carriers is the low ground pressure rating that these tracked units provide. This attribute allows the machines to cross roadways or environmentally sensitive areas with minimal to no damage, and they won’t get stuck.

“Crawler carriers range from very big to very small, but they’re built in such a way that their ground pressure rating stays about the same,” Little says. “An average man exerts about 11 psi, which is twice the amount of pressure exerted by one of these machines carrying 40,000 lbs.”

Typical crawler carriers range between 2 to 5 psi, depending on base operating weight and load capacity. The machines usually weigh about 10,000 to 30,000 lbs, with payloads from 12,000 to 46,000 lbs. Their low ground pressure and hefty payload allows them to attack a variety of tasks without sacrificing jobsite accessibility. 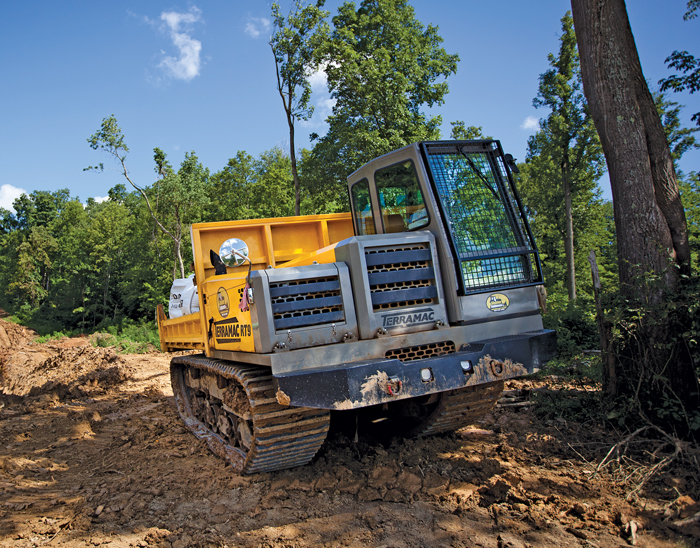 Crawler carriers used to be the ideal tool for hauling mats so that larger machinery could access a pipeline right of way. Now, the machines are tackling on more and more duties on the jobsite.

“The reason they’re so popular is that they can be used with different attachments for use on pipeline projects,” Crimaldi says. “You can outfit them with welding machines, use them as personnel carriers, or add hydroseeding units or mulch blowers. On the right of way, there’s no road, just dirt, so if it rains, access is terrible. A track carrier makes it suitable for all ground conditions. “

Both Crimaldi and Little liken crawler carriers to trucks.

However, by having tracks instead of tires, Crimaldi says contractors don’t have to worry about accessibility on a rainy day or wearing deep ruts into the landscape.

The three most popular configurations of crawler carriers used on oil and gas pipeline jobsites are with welding machines, dump boxes and flatbeds, according to Little. For welding applications, crawler carriers can be mounted with welding machines, tents and a small crane to manipulate the other equipment. Dump boxes are used to haul material, such as sand for pipe backfill. Flatbeds are usually used to move mats around so that bigger equipment can get around the jobsite.

Crawler carriers are also popular in oil and gas exploration.

To improve interchangeability on crawler carriers, manufacturers like Terramac and Prinoth are developing mounting systems that reduce the time and difficulty of switching from one application to another.

“For instance, in mining exploration, you need a drill, but you also need support items for the drill, like rods, water for lube, a shack to store core samples and to keep out of bad weather,” Little says. “If you had a dedicated vehicle for each item, you’d have five vehicles on one site. What we’ve done is adapted a roll-off system, so that one vehicle brings in each tool on a platform.”

Different tool platforms or beds can also be attached with temporary welding, a hook lift system or brackets and bolts. 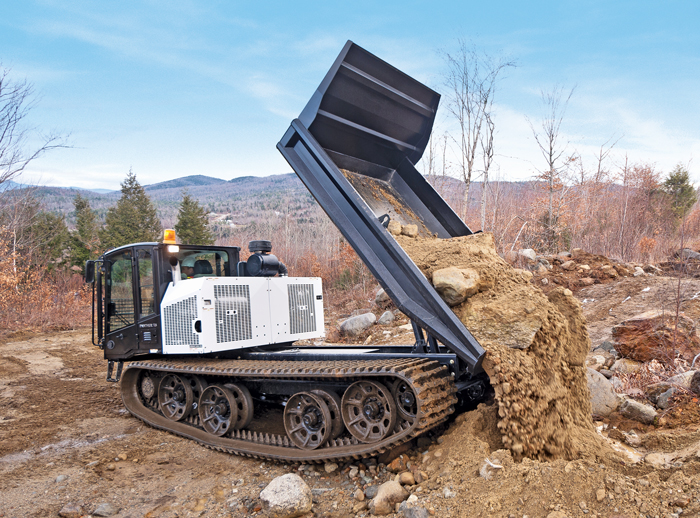 Dump boxes are one of the more popular configuration of crawler carriers for the oil and gas sector. These beds can be switched out with other options to enhance versatility.

“If you attach a welding machine to a bed, you can remove that bed in less than an hour and then attach another bed in another hour,” Crimaldi says.

“Within a couple hours, one machine can be used for different applications, which also makes them great for rental companies that have customers looking to use the machines for multiple jobs. They can switch out the bed for whatever the customer needs.”

The Efficiency Argument
While low ground pressure and versatility are top reasons for why crawler carriers are gaining in popularity on oil and gas pipeline jobsites, those qualities add up to another benefit: efficiency.

“For the customers we’ve worked with so far, they’re all looking for the same thing and that’s ease of work,” Little says. “When using bull dozers and other heavy equipment, once you get to a roadway, it becomes a pain because you have to put down mats. You have to have extra pieces of equipment to put down the mats and block traffic. With rubber tracked carriers, you can just go across the road. There’s no damage done and no delay. You don’t have to stop traffic as long. Low ground pressure also means less environmental impact compared to a wheel loader or bull dozers.”

The draw of efficiency has led to crawler carriers taking on more and more tasks.

“They save time, effort and money,” Little adds.

The Right Choice
While the merits of crawler carriers are many, there aren’t too many criteria to consider when looking to rent or purchase a unit.

“Depending what it’s used for, customers usually go by carrier capacity,” Crimaldi says. “The Terramac RT9 is sort of in between two sizes to add a little more drive capability. The heaviest carrying capacity possible on our machine is a non-permitted load. That way they can go from one jobsite to another, and they don’t need a special permit.”

The main thing to look for in a crawler carrier, Crimaldi says, is the power of the unit.

“If you’re on a jobsite where you’ll be climbing hills, you need to make sure you have enough drive torque,” he says. “The other measuring tool is how the machine is rated on carrying capacity and ground pressure.”

Little agrees that carrying capacity is the primary deciding factor between machines and that the weight of the mounted tools or bed is a big consideration.

“Customers want the carrier to get the tools they work with to where they need to go,” he says. “The main determining factors are payload offered vs. the weight of the tools they’re using. A welding machine for instance, the total welding package with canopy is about 6,000 lbs, so you need to look for a machine with a capacity of 6,000 to 8,000 lbs to carry that. You don’t want to be underpowered and risk getting stuck, which leads to costly downtime.”
If you size the equipment properly, Little says, you virtually eliminate most problems that could come along.

A Growing Market
Although crawler carriers have been around for more than 20 years, Crimaldi says the machines have been growing in popularity over the last 10 years. As contractors are finding more uses for the rubber-tracked utility vehicles, a shortage of availability arose.

“I jumped into the market because I saw a demand,” says Crimaldi, whose Rig Source Inc. supplied used machines for the construction market. In recent years, he saw that the lead time for receiving a new carrier became longer and longer and availability of used machines was little to none.

“Demand was always there,” he says. “We were looking for more machines all over the world in whatever condition. I decided to take destiny into my own hands and try to fill the gap. Demand never seemed to stop, but production lead time for availability was six to eight months. If you waited that long, you’d be in a different season.”

Terramac has continued to grow, as it recently secured its first distributor in the U.K. The company already has dealers across the United States and Canada. The oil and gas pipeline market makes up a majority of the company’s business. Crimaldi sees the “new gold rush” in the Bakken shale as a major driver for the crawler carrier business moving forward.

Little agrees, adding that oil and gas pipelines look “very strong for the next four to seven years.”

“There are huge projects in the planning stages and awaiting permitting or awaiting President Obama to give the OK,” Little says. “There’s a tremendous amount of work to go around. The raw materials have to get somewhere, and all pipelines contribute to that in some way or other.”

As oil and gas resources need to be transported to market, construction materials need to be hauled across those pipeline jobsites. Crawler carriers can carry the load.