... Eating the Oil Industry From the Inside Out - Corrosion

Eating the Oil Industry From the Inside Out 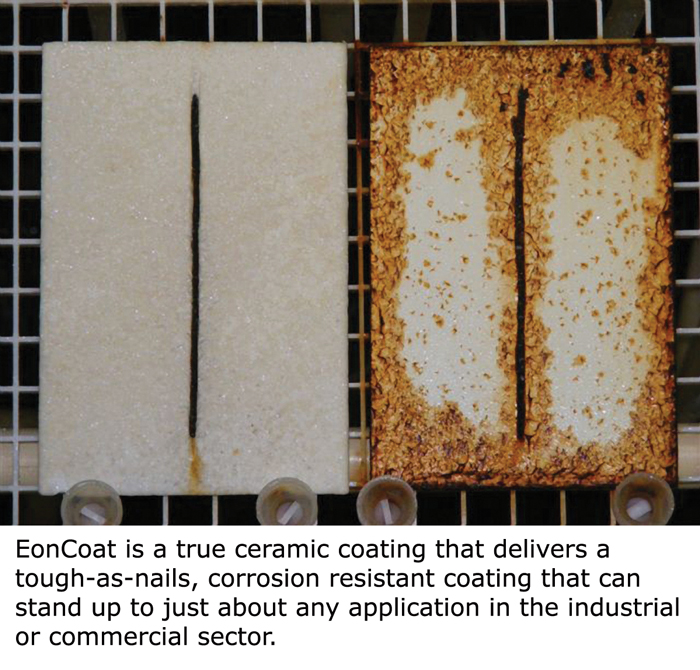 Corrosion Has Long Been the Bane of the Oil Industry. New Approaches Are Resolving the Difficulties

In the oil and gas industry, corrosion accounts for more than 25 percent of failures, according to a recent NACE International report. Corroded pipe repair or replacement costs the industry more than $7 billion per year, based on estimates from NACE. This figure can double when lost revenue, productivity and spill or leak cleanup costs are tallied.

“Corrosion is a major industry challenge from external floating roof tanks, to tank interiors, to above and below grade piping systems, particularly where pipes transition from above to below grade,” says Scott Justice, tank division operations manager of Bolin Enterprises Inc. (BEI), a Casey, Ill.-based pipeline and tank maintenance contractor serving the oil and gas industry.

While traditional corrosion protection has relied mostly on short-lived physically bonded coverings of substrate surfaces such as tapes, elaborate three-part coating systems (zinc, epoxy and urethane) and cathodic protection, these merely attempt to lengthen the time before the steel asset inevitably rusts.

A New Approach to Corrosion Protection
“What caught my eye about EonCoat was its unique adhesion and chemical properties,” says Justice, who visited the Wilson, N.C.-based company of the same name to view its corrosion testing lab, processes, and procedures for its CBPC coating. “If its hard outer shell is breached or knocked off, it still has corrosion protection where traditional coatings do not. Whether its coating is aged, beaten, or banged around, it still protects the surface. If you remove the outer ceramic shell, the chemical bond with the substrate still stops corrosion at the surface.”

In contrast to typical paint polymer coatings which sit on top of the substrate, the anti-corrosion coating bonds through a chemical reaction with the substrate, and slight surface oxidation actually improves the reaction. This makes it impossible for corrosion promoters like oxygen and humidity to get behind the coating the way they can with ordinary paints. The corrosion barrier is covered by a true ceramic shell, which resists corrosion, fire, water, abrasion, chemicals and temperatures up to 1,000 degrees Fahrenheit.

While traditional polymer coatings create a film structure which mechanically bonds to substrates that have been extensively prepared, if gouged, moisture and oxygen will migrate under the coating’s film from all sides of the gouge. Moisture and heat are then trapped by the film, creating a “greenhouse effect,” promoting corrosion and blistering. By contrast, the same damage to the ceramic coated substrate will not spread corrosion because the steel is essentially alloyed. Its surface oxides have been converted into an inert, electrochemically stable metal incapable of supporting oxidation. 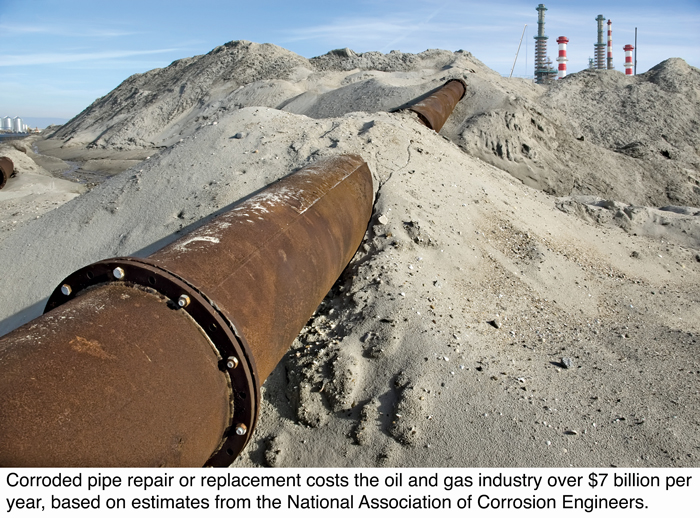 Ceramic coatings such as this consist of two, non-hazardous ingredients that do not interact until applied by a plural component spray gun like those commonly used to apply polyurethane foam or polyurea coatings. Since the components are not mixed and do not meet prior to application, the need for hazardous VOC-generating ingredients is eliminated, as are HAPs and odor. This means that the work can get done in occupied areas.

“The results of the corrosion tank test were impressive,” Justice says. Among the corrosion tests frequently run by the manufacturer of the CBPC product is one where the ceramic coating has gone more than 10,000 hours with no corrosion in a salt spray ASTM B117 test. “If the coating works as well as we hope, it could help to stop or minimize corrosion and extend the longevity of a range of oil and gas assets,” Justice adds.
Unlike organic carbon polymer-based paints and coatings, which may give a foothold for corrosion causing microbes to grow, ceramic coatings are completely inorganic, so they are inhospitable to mold or bacteria.

“Since EonCoat is inorganic, it cannot sustain mold or bacteria growth,” Justice says. “This could help to control corrosion issues related to mold growth on the external surfaces of water storage or elevated tanks, particularly when new oxygenated fuels are involved.”

While not widely considered, the Achilles’ heel of many traditional corrosion coatings may be in how exact the environmental conditions must be during their application to meet specifications. “A lot of coating products fail due to changes in temperature, humidity, dew point and other atmospheric factors during application,” Justice says. “As conditions change seasonally throughout the year, it can be difficult to provide perfect coating conditions.”

A plus for corrosion protection is how the protective ceramic coating can be applied on hot and cold surfaces from 40 to 150 F in 0 to 95 percent humidity, excluding direct rain.

“Since the ceramic coating takes changes in temperature, humidity, and dew point out of the equation during application, it can be reliably used in tough environmental conditions that might otherwise compromise the corrosion protection of typical coatings,” Justice says.

“To keep a corrosive coating working well, you want one that will be resistant to high temperature, abrasion, chemicals, UV sunlight, and other environmental factors,” Bartko says. “EonCoat is strong in these areas, but just as important is how quickly it can get an oil and gas facility up and running. As a comparison, it took us about four days with EonCoat, compared to about 10 to 12 days with other coatings.”

Bartko explains that on coating projects using typical polymer paints such as polyurethanes or epoxies, the cure time may be days or weeks before the next coat of three coatings can be applied, depending on the product. The cure time is necessary to allow each coat to achieve its full properties, even though it may feel dry to the touch.

In contrast, a corrosion coating can be achieved with the ceramic coating in a single coat, with almost no curing time necessary. Return to service can be achieved in as little as one hour.

“With the ceramic coating for corrosion protection, we’re able to get facilities back up and running right away after spraying, sometimes in an hour,” Bartko says. “That kind of speed in getting an oil and gas facility producing again can potentially save millions per day in reduced downtime. It makes sense to use the ceramic coating anywhere steel is used and may corrode, from pipelines and processing to storage.”

Tony Collins is CEO of EonCoat, based in Wilson, N.C. Contact him at tonyc@eoncoat.com.