Concho Resources Inc. is expanding its footprint in the core of the Midland Basin region of Texas. The independent oil and natural gas company announced Aug. 15 it has reached a definitive agreement to acquire approximately 40,000 net acres from Reliance Energy, a privately held, Midland-based energy company, for $1.625 billion.

The privately negotiated acquisition is consistent with Concho’s opportunistic and disciplined portfolio management strategy as it expands its core Midland Basin position to more than 150,000 net acres and production of 30,000 barrels of oil equivalent (boe) per day.

“This transaction demonstrates Concho’s commitment to the Midland Basin as a core operating area and highlights our continued efforts to consolidate complementary leasehold,” said Tim Leach, chairman, CEO and president.” In line with the objectives of our southern Delaware Basin acquisition in the first quarter of 2016, these assets not only build scale, but more importantly high-grade our inventory with additional long-lateral locations that compete with the best projects in the Permian Basin. As we continue to enhance our ability to efficiently allocate capital across our four key assets in the Permian Basin, we are uniquely positioned to deliver attractive returns today and build shareholder value over the long term.”

The acquisition includes 10,000 boe per day from 326 vertical wells and 44 horizontal wells, only one of which was completed in 2016. The present value of this stable production base at current NYMEX strip pricing is approximately $500 million, with the remaining $1.1 billion of the purchase price attributable to 40,000 undeveloped acres.

The acquired acreage is located in Andrews, Martin and Ector counties in Texas with minimal leasehold obligations. The acquisition adds more than 530 long-lateral drilling locations to the company’s inventory. Due to the contiguous nature of the acquired assets, two-thirds of these locations are 2-mile laterals, and the remaining locations are 1.5-mile laterals. The engineered locations are based on eight locations per zone in the Middle Spraberry, Lower Spraberry or Wolfcamp B, with two to three of these zones targeted per drilling spacing unit. The company believes there is substantial development upside from applying optimal drilling and completion methods, testing closer well spacing and delineating other zones.

Consideration in the transaction includes approximately $1.1 billion of cash and 3.96 million shares of Concho’s common stock valued at approximately $500 million and issuable pursuant to a stock payment option that the company intends to exercise. The company intends to fund the cash portion of the acquisition through proceeds from a potential equity market transaction, subject to market conditions and other factors. The acquisition is expected to close in October 2016, and is subject to customary closing conditions. 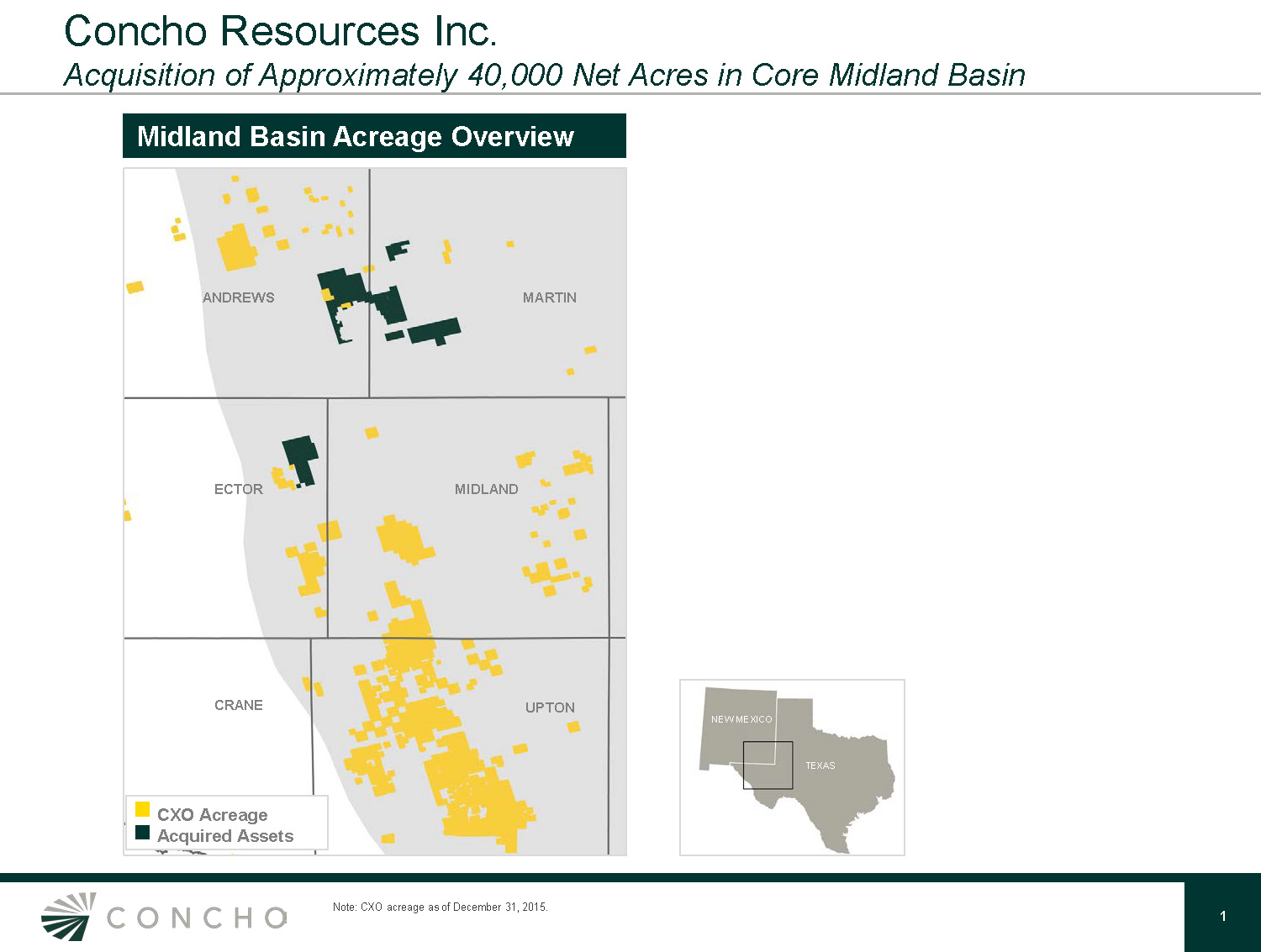