... Colonial Pipeline Ordered to Shut Down

Colonial Pipeline Ordered to Shut Down

The U.S. government ordered Colonial Pipeline Co. to shut down a section of its Line No. 1 near Helena, Alabama, after a gasoline leak was detected there on Sept. 9. The Pipeline and Hazardous Materials Safety Administration (PHMSA) issued a corrective action order Sept. 16 that also required the company to devise a restart plan for the agency’s approval before resuming operations through the repaired section. 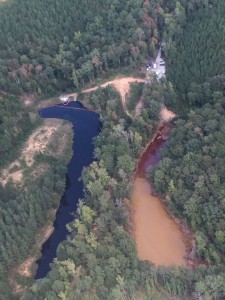 Aerial view of the Colonial Pipeline that leaked in Shelby County, Alabama, on Sept. 9.

Colonial shut down Line No. 1, as well as nearby Line No. 2, on Friday, Sept. 9, after an Alabama Surface Mining Commission inspector in Shelby County, Alabama, detected a gasoline odor on mining property. He alerted Colonial Pipeline, and Colonial employees were dispatched for a visual survey of the site. Upon confirmation of a release, the company mobilized a coordinated response effort with federal, state and local agencies, as well as local emergency responders. Colonial Pipeline has more than 700 employees and partners on site working as safely and expeditiously as possible to repair the impacted segment of pipe and return to normal operations.

Colonial Pipeline began implementing a plan to construct a bypass around the impacted segment of Line 1 on Sept. 17. Work conditions have been favorable for bypass construction, according to a company statement. Line 1 is projected to restart later this week.

The company must complete mechanical and metallurgical testing and a failure analysis of the pipe by an third-party laboratory or expert, according to PHMSA orders. The testing must be done within 45 days of excavation and exposure of the assumed failure site. The company must also conduct an in-line inspection of the failed pipeline segment within 90 days of restart to ensure there has been no metal loss, deformation or other damage.

Recovery efforts at the initial release site will continue along with bypass construction, and the company is monitoring the Cahaba River and a Peel Creek tributary on a daily basis.  Preliminary results from both the U.S. Environmental Protection Agency and Colonial Pipeline environmental contractors have shown no impact to either waterway as a result of this release. 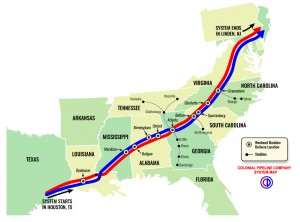 Supply route for Line No. 1 operated by Colonial Pipeline Co. The pipeline supplies gasoline to major markets on the East Coast.

Under normal circumstances, the Colonial Pipeline system transports approximately 2.6 million barrels of refined products each day, with Line 1 accounting for half of this volume. Colonial is currently shipping significant volumes of gasoline on Line 2, the distillate mainline, to help mitigate the impact of the service interruption to Line 1.

Colonial is providing daily updates of cleanup efforts at: https://helena.colonialresponse.com/category/news-updates.