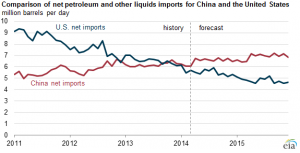 China became the world’s top importer of petroleum and other liquids in September 2013, according to the U.S. Energy Information Administration (EIA).

U.S. total annual petroleum and other liquids production is expected to rise 31 percent between 2011 and 2014 to 13.3 million barrels per day (bpd), primarily from tight oil plays, according to a March 24 report by the administration. In the meantime, Chinese production will increase at a much lower rate (5 percent over this period) and is forecast to be only a third of U.S. production in 2014.

On the demand side, China’s liquid fuels use is expected to reach more than 11 million bpd in 2014, while U.S. demand hovers close to 18.9 million bpd, well below the peak U.S. consumption level of 20.8 million bpd in 2005, the EIA report stated. U.S. refined petroleum product exports increased by more than 173 percent between 2005 and 2013, lowering total net U.S. imports of petroleum and other liquids.

China has been diversifying the sources of its crude oil imports in recent years as a result of robust oil demand growth and recent geopolitical uncertainties. Saudi Arabia continues to be the largest supplier of crude oil to China and in 2013 provided 19 percent of China’s 5.6 million bpd. Because production levels from Iran, Libya, Sudan and South Sudan dropped since 2011, the EIA reported that China replaced the lost shares of crude oil and other liquids imports from these countries with imports from Oman, Iraq, the United Arab Emirates, Angola, Venezuela and Russia.