A Case Study in Data Exaggeration and Improper Deformation Analysis 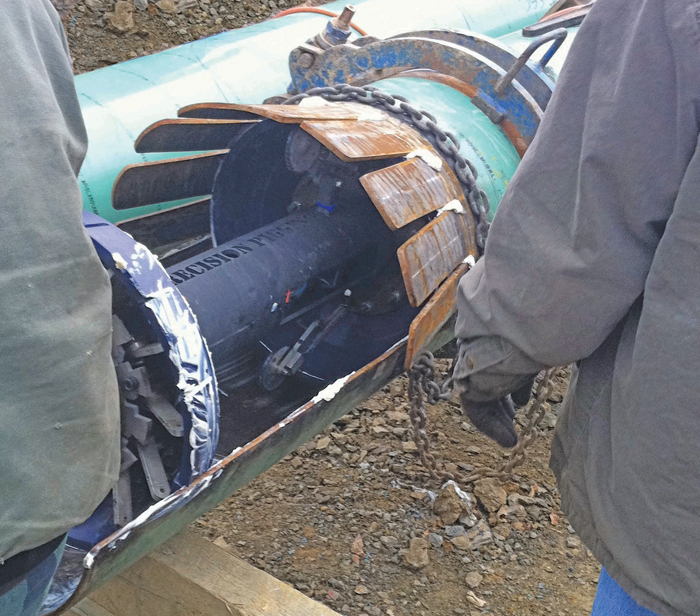 Precision Pigging received a call on a Saturday requesting a technician onsite by Monday morning. The client wanted a verification run to confirm the results obtained by the prior vendor. Timing was critical at this point due to the desired in-service date for the pipeline and the delays already experienced from the defect investigations already described.

The ability to achieve rapid onsite deployment has become a true specialty of Precision Pigging, and a technician was indeed onsite as requested. In fact, the client was still completing the excavation process to expose the pipe at the identified defect location when the technician arrived that morning. Once the pipe was fully exposed, there was no measureable defect in that location; however, the client still wished to proceed with the verification run.

Precision Pigging performed a successful inspection run and acquired reliable data to analyze for the client. After reviewing the data, Precision Pigging concluded that there were no defects in the pipeline.

The obvious question asked by both the client and the operator was, of course, how Precision Pigging could be so sure that the defects previously identified by the other vendor were not defects at all. An analysis of the other vendor’s data and report clearly showed that the tool itself exaggerated the data, and the technician incorrectly interpreted the data acquired by his own tool — mistakes that proved quite costly for
the client.

At the first defect location initially identified, Precision Pigging recorded data indicating that the pipe was not, in fact, out-of-round.

The other vendor had provided an excavation sheet for this location, but there were several telltale signs of inaccurate measurement of this bend. The first big red flag for this misidentification was that the defect identified was located in an over-bend. Typically, when there is a problem with a bend in the pipe, it will be located in a sag bend. There is an old pipeline saying — “riding hard in the sag” — which simply means that more downward force is exerted on the lowest bend, which is usually a sag bend.

The second red flag in the prior vendor’s analysis is that the individual sensors showed the pipe to be expanding in the 6 o’clock position. It is highly unlikely that the pipe would be expanding at this position; normally, this is where a constriction causes an ovality. Many factors can cause constriction at the 6 o’clock position, such as the weight of the pipe; the weight of the water exerted on the pipe during a hydro-test; and/or the weight of back-filled soil. Sand bags/water breaks or even a poorly leveled ditch can further exacerbate many of these factors.

Simply put, it is extremely illogical that the pipe is expanding at the bottom of the pipe.

The most likely explanation is that the other vendor’s pig traveled at a higher rate of speed entering the bend and the back end where the sensors are located simply was “kicked up” a little. To clarify further, the distance between the front and back cup on any geometry pig for this diameter pipe is over 2 ft. In this case, the front cup was already half-way through the bend before the rear cup with the sensors ever entered the bend. 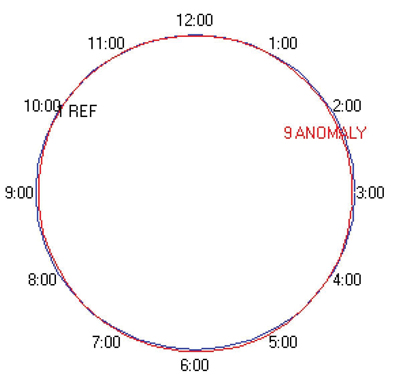 This image is a magnified cross section of the pipe located in the centerline of the factory over-bend. The blue circle represents the ideal, perfectly round pipe; the red circle line represents Precision Pigging’s actual recorded values indicating that the pipe was not, in fact, out-of-round.

The final red flag for the previously acquired data was that the sensors recorded expansion in the 6 o’clock position but did not record any changes in the 12 o’clock position, i.e. there was no oppositional deflection of the sensors. A simple analogy for this phenomenon is to squeeze an empty soda can or plastic bottle. On the opposite sides of the can, the sides perpendicular to the force applied pop out evenly, not just on one perpendicular side. In the case of a true ovality, the pipe would be squeezed from the 3 o’clock and 9 o’clock positions — and the 12 o’clock and 6 o’clock positions would have to expand equally to compensate for the metal displacement.

In fact, the appearance of 180-degree data deflections is one way to distinguish between debris in the line, heavy welds, and an actual reduction that requires excavation. With a true dent in the 6 o’clock position, the 3 o’clock and 9 o’clock positions will expand outwards; the same physics principle illustrated by the soda can.

Recall the tee; the initial report identified to be 1.219 wt with the nominal wall pipe of 0.500 wt; a true transition to such heavy wall pipe would represent a reduction of greater than 7 percent. If correct, that tee would almost certainly require replacement. However, in this case, a little bit of common sense review clearly showed that either the initial data collected or the analysis of that data was incorrect.

Perhaps most importantly, the data recorded by Precision Pigging did not indicate any such wall thickness change. However, there were now two apparently competing sets of data. There were several pieces of evidence from the run itself that, when added together, provided a compelling reason to accept Precision Pigging’s data as correct.

First, if there were that great of a change in the wall thickness, the pig would have hung for a significant amount of time, resulting in an immediate loss of the remaining head pressure in the short distance remaining to the end of the pipe. The loss of head pressure would have then sent the tool rocketing through the valve (and most likely striking the end cap of the receiver), resulting in visible damage to the pig.

In this case, however, the pig did not hang for a significant amount of time. There was no drop in head pressure. The pig did not strike the valve or the end cap; in fact, Precision Pigging’s technician retrieved the deformation tool from the line in excellent condition. All of these circumstances indicated that there was no major change in wall thickness at that tee location, thus corroborating Precision Pigging’s collected data.

The accuracy of Precision Pigging’s tools makes their inspection services highly valued. Precision Pigging’s tool acquired data that proved there was nothing wrong with the client’s pipeline in either location previously identified. Notwithstanding the expense and delay already incurred by the initial vendor’s misinformation, the client and operator were indeed both relieved to find out that there were no defects in the line.