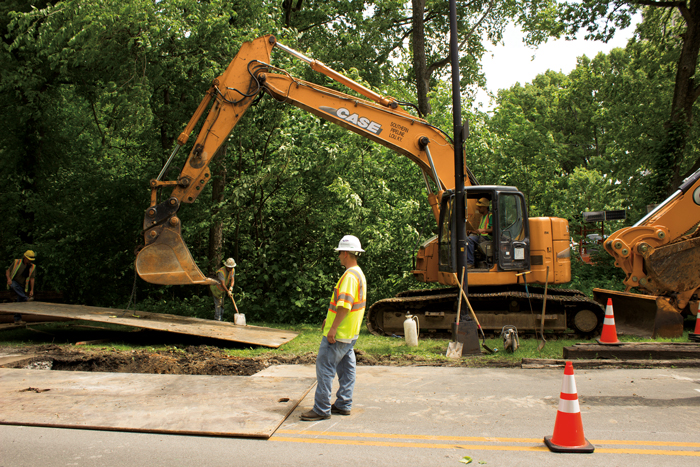 Since 1842, when Jerome Increase Case began manufacturing his threshing machines in Racine, Wisconsin, as the Racine Threshing Machine Works, the Case name has been synonymous with construction and agriculture equipment.

From those early days and the creation of the J.I. Case Company, to the introduction of the first tractor loader/backhoe in 1957 to today, Case Construction Equipment has morphed into a full-line equipment manufacturer with a reputation for reliability, innovation and exceptional customer service.

This has propelled the company, now part of CNH Industrial, to the top of the construction equipment market. Ever-present on large-scale transportation and local distribution pipeline projects across North America are the Case hydraulic excavators, dozers and wheel loaders.

In 1981 — the year David Spencer started at Southern Pipeline as an operator — there were about 22 employees, four Case backhoes and two rubber-tired Case sidebooms. Today Spencer, now the company’s CEO, says there are 94 employees and about 50 pieces of Case equipment, which represents 90 percent of the company’s fleet. 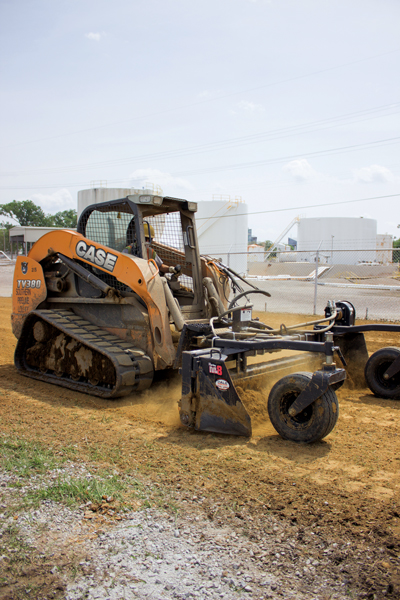 The success of those projects over the years is due to Case’s quality employees, reliable equipment, and a high level of customer service.

“The company is dependent on the strength and durability of the Case products,” Spencer says. “We have a 580E backhoe with forks on the front end that we use in the yard that was manufactured in the middle 1980s.”

“Case benefits by being part of these associations by making its membership aware of our Case product offering,” says Rob Manthei, corporate account manager for CNH. “We are able to build relationships with the owners and key personnel of these companies.”

Though he can’t pinpoint when Case equipment was first used on a North American oil or gas pipeline project, Manthei says that the company’s wheel loaders, excavators and dozers are popular on larger transportation pipeline projects. A close fourth would be the motor graders.

“Excavators and dozers are the two most popular machines on a pipeline job,” Manthei says. Breaking the pipeline segment down further, he pointed to the CX300C, CX350C and CX470C excavators and the 1150, 1650 and 2050 M-series dozers as popular models, with the machines performing multiple duties on jobsite, such as dozers with winches stabilizing excavators and other types of equipment when working on slopes. Dozers also are used extensively in site-clearing and reclamation activities.

“You see the wheel loaders used more as an accessory to move pipes and equipment around than actually used for the pipe laying itself,” says Philippe Bisson, brand marketing manager for Case.

However, these are the big dogs, both in terms of size and scale; the Case backhoes, compact track loaders and skid steers are employed to serve important support roles.

“The backhoe loaders are used in the same support functions on distribution work as the large excavators are on a large pipeline project. They are more agile and can get into tighter and more confined spaces, and you don’t have to put those on a trailer — they can be roaded,” Manthei says.

Also popular among the smaller oil and gas pipeline contractors is the full line of Case mini-excavators, something that Spencer can attest to. 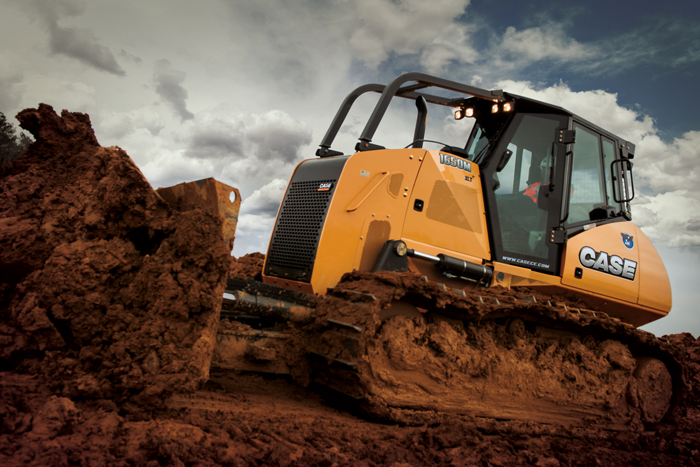 Serving the 14-county Louisville Gas & Electric service area, Southern Pipeline’s crews are familiar with working in and around homes and in backyards.

Southern has four zero-turn Case mini-excavators that allow the operator to swing the boom within the width of the tracks, which is key when working between trees or other tight spaces eliminating the need to reposition the excavator.

On the larger jobs, Spencer appreciates that Case continues to offer its traditional backhoe controls where other companies have gone to wobble sticks or, in some cases, only offering pilot controls.

“With the three stick the levers are close enough together you can operate the controls with one hand leaving you other hand free to reach around and steer the front tires while pushing the machine with the backhoe component,” Spencer explains. “Also, if you get in swampy ground trying to move the machine, you can use your front bucket with your free hand to roll the bucket lifting the front tires out of the mud and rolling the bucket to crawl forward with the machine.”

As a former operator, Spencer says this is an area where Case has trumped the competition, based on Southern Pipeline’s experience. “Case has never built a backhoe that is top-heavy,” he adds. “A lot of the competitors backhoes are hard to maneuver around in rough terrain on that account.”

Maximum uptime equates to maximum dollars received and one of the key ways to keep moving is by using reliable equipment, which — if Southern Pipeline’s history is any indication — Case is.

How long does a Case excavator, wheel loader or other piece of equipment typically last in the pipeline industry?

“That’s an open-ended question,” Manthei quickly replies. “It depends on how it is taken care of to be honest.”

Without having a pipeline-specific equipment line, Bisson says that Case takes great steps to work with customers to make sure the proper maintenance takes place and they have the correct equipment to meet their needs. Accessories like the automatic lubrication systems help make that possible.

“If a company … [is] working very heavily, and they work their machines for long hours, such as they do in the pipeline industry, it’s more of a hassle for a company to remove the product, have all the servicing done and then bring it back,” Bisson says. “The auto lubrication system allows the equipment to be maintained very adequately without having the risk of not being done, which could actually significantly impact the components of the machine, like the bushings and in turn diminish the lifespan of the machine.”

With some of Southern’s larger track excavators being up to 15 years old, Spencer says that maintenance has made a big difference.

“We’ve found, with our company, with track excavators and our rubber-tired loaders as long as you maintain it like it’s supposed to, it will last,” he says. “It’s been a major factor in this company’s growth.”

Other design features that help keep the equipment properly maintained include prolonged service intervals on difficult to reach bushings and greasing points and the repositioning of the grease tanks to a more user-friendly area.
Owners of 2013 or newer heavy equipment from Case received another boost in the reliability and maintenance column when the company unveiled the three-pronged ProCare program.

“The product comes with a standard factory warranty of three years or 3,000 hours, but more importantly we also included at no cost to the customer, other than the cost of transport, a three-year or 3,000-hour planned maintenance,” Bisson says.

Case works with its dealers to ensure that the correct service intervals are met to prevent premature wear. Bringing the conversation to the third prong of ProCare is the addition of SiteWatch telematics program. This places Case at the head of the pack when it comes to a comprehensive maintenance package.

“Contractors want to be supported by the manufacturer to achieve optimal uptime and productivity, and that’s what our ProCare package is focused on,” Manthei says. “Our extended warranty and preventive maintenance program shows the customer that we support them in improving productivity and controlling operating costs.”

With a properly maintained machine, like those in the Southern Pipeline fleet, Spencer says there is an outstanding lifespan and a good resale value when his company’s time with the machine is done.

Another important aspect of Case’s success and the success of its customers is the high level of customer service at Case and at the dealers.

“It makes a difference to us,” Spencer says. “Glen Gish is an outstanding person. If you have any kind of problem with a piece of Case machinery, all you have to do is call Glen.”

Gish is Southern Pipeline’s long-time sales representative at Bale Equipment Solutions, which is an authorized full-line Case dealer in Louisville and Elizabethtown, Kentucky.

“He’s not worried about pushing the product, he’s concerned about making sure the customer gets what they need,” Spencer says of his 25-year relationship with Gish. If there is a problem with the equipment that Bale can’t handle, Gish goes right to Case, which Spencer applauds for “standing behind its machinery to solve any problems.”

Some of the biggest advancements in new equipment involve emissions control devices to meet Tier 4 Interim and Tier 4 Final requirements.

Most of the equipment at this point is Tier 4 Interim, according to Bisson, but those who visited the Case booth at CONEXPO-CON/AGG 2014 saw the company launch its Tier 4 Final 821F and 921 wheel loaders. Bisson says that the majority of the Tier 4 Final wheel loaders will arrive in 2015, the rest in 2016, and the bulk of the excavators arrive in 2015 through 2017.

According to a press release about the wheel loader rollout in Las Vegas, the equipment uses selective catalytic reduction (SCR) technology that treats emissions separately with diesel exhaust fluid (DEF) and does not require the engine to re-circulate exhaust gas. This optimizes combustion and machine performance, lowers exhaust temperatures and eliminates maintenance and downtime associated with filter replacement and regeneration. It also helps lower fuel consumption.

“Case was the first to implement SCR into our Tier 4 Interim machines because that solution makes the most sense for wheel loaders based on the inconsistent engine loads placed on the machine throughout its regular work cycle,” Bisson says in the release. “It also prepared everyone, from our dealer network to our customers, for the technology change ahead of other manufacturers, placing them in the best position to succeed as the Tier 4 Final regulations come into effect.”

As Case prepares to bring other Tier 4 equipment to market, it is taking a long look at which technology is best, SCR or cooled exhaust gas recirculation (CEGR). In some instances, it could be a combination of both.

“Our technology uses various styles of engines to meet the emissions, some have SCR system only on wheel loaders from the 521 all the way to the 1121,” Bisson says. “And on our excavators it’s going to be a combination between SCR and CEGR with DOC (diesel oxidation catalyst) on it. It all depends on the type of application that the product is going to be doing.”

Though there have been complaints from customers and manufactures alike because of the new technology, Bisson says there is a clear upside.

“It’s forced the manufacturers and Case especially to review their design and their products to the point where you are seeing quite an increase in fuel efficiency in new technology machines in the range of 15 to 20 percent in some cases and even more at times,” he says. “That new technology actually has a huge impact for those customers that use the machine in a pretty severe environment where the price of gas is now. If you reduce your cost of fuel by 20 percent, it is significant. So you have a brand new technology with great savings fuel-wise — it’s a win-win situation.”

As the oil and gas pipeline market grows with the development of shale plays in North America and the tar sands oil in Canada, Case sees a definite potential for growth.

“It’s a segment that has been growing significantly in the U.S. and Canada,” Bisson says. “I think it’s a segment that will continue to grow over the years, not only in terms of new business that is being found and developed, but also in terms of all of the maintenance of the current systems that are there. Case sees this as an opportunity that we want to be able to support our customers and potential customers in that field.”