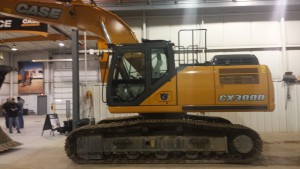 The Case CX300D and the CX350D are ideally suited for the oil and gas industry. All D Series models feature swing control, which eliminates the pendulum effect when picking up pipes.

Case Construction Equipment lit up the night sky in the North Woods of Wisconsin when it officially unveiled its D Series line of crawler excavators.

The April 20 unveiling of the new D Series line took place at Case’s fabled Tomahawk Customer Center, which in and of itself is a site to behold. Case CE highlighted four of the five D Series models available the CX210D, CX250D, CX300D and the CX350D. The only model not displayed was the CX250 Long Reach (LR).

“We’ve had a great excavator in the marketplace the C Series excavator we prided ourselves on great fuel economy but what the customers told us, especially when you get into the larger size excavators, is that productivity is key,” Jim Hasler, Case’s vice president for North America, told the assembled media. “I’m really excited and I am really proud of what we’re bringing to market.”

“The value proposition of the D Series excavators is the ability to do more work while also reducing fuel use and therefore lowering the total cost of ownership,” says Phillipe Bisson, Case’s brand marketing manager for excavators and wheel loaders. “Of the four D Series excavators introduced today the cycle time has been improved by up to 12 percent over the previous model and that allows the equipment to work faster and faster translates to the ability to improve productivity and get more work done.”

In addition to the increased cycle times, the new D Series lineup is up to 14 percent more fuel efficient than the C Series models, are more responsive, have improved controls and an overall improved cabin. The cabin features include joystick controls, a 7-in. monitor to display pertinent data, a Bluetooth radio and a heated air ride seat (a welcome addition when you’re testing equipment during a mid-April snow squall). A common statement heard throughout the product launch and subsequent testing was that a comfortable operator is a productive operator. 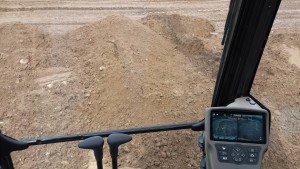 The Case D Series cabin features a Bluetooth radio, a heated air-ride seat and a 7-in. monitor.

During research and development, the improvements in productivity were interpreted by how many more trucks the D Series could fill than its predecessors could – the CX300D was the king of the D Series boasting 9,500 more truckloads a year.

“That’s something an equipment operator can understand,” Bisson says, adding that filling more trucks at a faster rate makes for increased profitability and a decreased overall cost of ownership.

On the safety side of the equation, the D Series is available with a standard rear-mounted camera that is constantly showing on the cabin’s 7-in. monitor. Case also unveiled an LED lighting solution for the D Series, which illuminates to near sunlight levels. This, Bisson says, allows a machine to work round the clock. The optional system features six lights – two front mounted, two rear-mounted and one light on each side of the machine. It is also coupled with side-mounted cameras that adds the Case Maximum View monitor, which combines feeds from three cameras to provide a comprehensive view to the rear and both sides of the machine.

More information about the D Series can be found by following this link to the Case CE website.