Everyone enters through the same door at the cavernous headquarters of Lincoln Electric in an east side Cleveland suburb. The welding equipment and consumables manufacturer has made its home in this Rust Belt capital along Lake Erie since 1895. In the last 122 years, the company has forged a reputation as a leader in manufacturing welding equipment and supplies. In addition, the Lincoln Electric Welding School provides comprehensive training for welders. While the company’s success has placed it on the forefront of the industry, its business management practices may seem old-fashioned by today’s standards.

John C. Lincoln started the company in his basement after being laid off in the summer of 1895 amid a financial panic that had gripped the United States. His early focus was developing and manufacturing electric motors. He even designed an electric automobile in 1904, which led him to selling battery chargers in the form of motor generators.

As the electric car business faded, Lincoln realized there was a bigger opportunity with his motor generators. They could do a lot more than charge a car battery. The machines could also produce an electric arc that could melt steel. From then on, the future of Lincoln Electric was welding.

John’s younger brother, James Lincoln, joined him at the company in 1907. As John focused more on invention, James took the reins running the business side. John appointed James as general manager in 1914, and James led the company for the next five decades until his death in 1965. During his tenure, James Lincoln set in place a business structure that remains largely in place to this day.

Four principles rule Lincoln Electric’s business model, and two of those were implemented more than a century ago. These practices were well documented in the 2010 book “Spark,” by Frank Koller, a former foreign correspondent and economics specialist for the Canadian Broadcast Corp.

“I believe Lincoln Electric’s success can serve as a symbol of hope at a time when the American economy doesn’t seem to be working well for many citizens and their communities,” Koller wrote in the conclusion of his book.

Second is the company’s reliance on piecework labor since 1915, a manufacturing model that has largely fallen out of favor in today’s economy. In short, Lincoln Electric factory employees are paid based on the number of products they produce. However, there are strict standards in place to ensure quality and efficiency. These standards are part of a merit rating employees receive.

Third is a merit-based annual bonus presented to all Lincoln Electric employees each year around Christmas. The amount each employee receives is based on their aforementioned merit rating, based on productivity, quality, attendance and other factors. The company has given out bonuses every single year since 1934. The bonus has ranged from as low as 25 percent of an employee’s base pay to as much as 120 percent, averaging well over 50 percent since 1955.

The fourth principle, the company’s guaranteed employment promise, was officially instituted in 1958, but had been in place for years prior. The guarantee states that employees will not be laid off for “economic reasons.” Employees must work at Lincoln Electric for three years to qualify for guaranteed employment. They also must agree to be placed in jobs as needed, giving the company flexibility to adjust its workforce to meet market trends. The company has not laid off anyone for economic reasons since 1948.

Some of these principles gained popularity in the days of Andrew Carnegie and John D. Rockefeller and came to be considered “welfare capitalism.” However, some of these same ideas were lauded as cutting-edge in the 1980s with the rise of the Japanese-inspired “high performance workplace” model.

Aside from the four core business principles outlined above, another tenet of Lincoln Electric’s success is a focus on continuous improvement, says Matt Fleming, manager of construction and rental sales at the company. The company has followed this principle to improve and expand its offering to the oil and gas pipeline market, even amid a downturn in the industry. 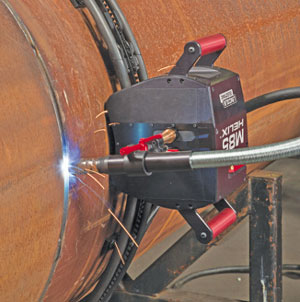 Automation is a growing trend in pipeline welding. Welding “bugs” can accommodate a wide range of diameters, but the jobsite conditions must be right.

Pipelines have always been a core market for Lincoln Electric, Fleming says, and the company has what he believes to be the largest and most knowledgeable sales force in the industry.

“We have 200 sales people in the field in North America at all times,” he says, “and they’re all trained on how to weld.”

Made up largely of engineers, the company sales team understands the technical aspects of the product and how that translates to the needs of
the customer.

Lincoln Electric provides the whole gamut of products needed for mainline pipeline contractors, from consumables, engine drives and mechanized equipment for joining pipe, as well as safety gear like helmets and protective wear.

Despite a downturn in the pipeline industry over the last two and half years, Lincoln Electric saw an opportunity to expand its offerings in the market, says Lisa Byall, portfolio manager for welding consumables.

“Although pipe has changed over the years, welding is still basically the same,” says Byall, referring to increased pipe strength. “The biggest concerns welders have are consistency and repeatability.”

Lincoln Electric embarked on a mission to improve electrodes used in various styles of welding, specific to the pipeline sector. The company also launched a new welder generator for the market, all while oil prices bottomed out and projects were being delayed.

Through a rigorous research and development process, Lincoln Electric asked its customers to evaluate its electrodes alongside competitor products.

“We felt it was very important to get the voice of our customers,” Byall says. “We engaged our customers at every step, knowing we were going to expose some warts along the way.”

The result was the Pipeliner Arc 80 stick electrode, which has become one of Lincoln Electric’s highest selling products. The Pipeliner brand of electrodes were tested by engaging key pipeline customers and by welding actual pipe during development, not just flat steel as required by the American Welding Society (AWS) standards. Byall says the company developed pipeline test reports for the industry to provide data on what to expect when welding different types of pipe.

“We wanted to go above and beyond with our pipe test report,” Fleming says about the AWS standards. “We visited a number of pipeline sites over the years, including the Dakota Access Pipeline and the Flanagan Pipeline, to get an idea of what our customers needed.”

Another product Lincoln Electric launched in the last year is its Cross Country 300 portable engine drive, which allows users to easily switch from manual stick to semi-automated wire welding processes. It was specifically designed for pipeline welders on the go. 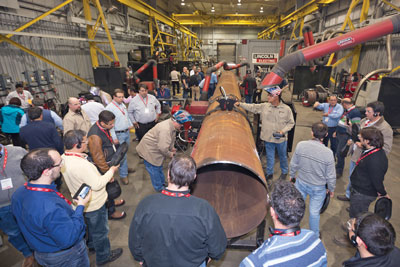 The Lincoln Electric Welding School celebrates 100 years in 2017. The school is currently housed in Lincoln Electric’s main factory in Euclid, Ohio, but a new building is being built across the street.

Quality control is a major factor in the success of any manufacturing company. Lincoln Electric is no different. However, a large part of the quality control process is the responsibility of the piece workers. While they are paid by the number of products they produce, they are also rated on the quality of those products, which in turn is factored into the amount they receive for the year-end bonus.

But Lincoln Electric also controls quality on the front end, with a system to ensure its steel suppliers meet rigorous standards, Byall says. This is another area where the company goes above and beyond AWS requirements.

“We have a unique manufacturing and quality assurance system,” she says. “We have a limited number of steel suppliers who must meet our own set of standards. We have steel analysts who work with and qualify our suppliers and inspect incoming steel. Suppliers must avoid using scrap, and Lincoln Electric does not ‘spot buy.’ And we often visit to audit the steel suppliers. We require mills to meet Lincoln Electric’s own requirements beyond AWS. Everything we do is about consistency, consistency, consistency.”

Byall adds that the company has a similar process in place for the chemicals used in its consumable products.

In addition to manufacturing welding products, Lincoln Electric also operates the oldest continuously operating welding school in the United States. The school will be 100 years old this year. To celebrate the centennial, the company is building a brand-new $30 million training center across the street from the main manufacturing facility where the school is currently housed.

In addition to the new building, Lincoln Electric has invested in training in other ways. The company developed an online Education Portal, to supply qualified schools with discounted gear and supplies. The company also launched a comprehensive welding and cutting curriculum package for welding educators, called U/LINC, which delivers lesson plans, quizzes, student activities, videos and PowerPoint presentations. Recognizing the younger generation’s proclivity toward technology, the company also launched VRTEX, a virtual reality arc welding trainer — like a video game for welders. It can be used for recruiting, employee screening and to augment traditional training, allowing the trainee to practice welding skills without burning plate or electrode.

Lincoln Electric’s offerings for the pipeline industry include manual welding products, as well as semi-automatic and mechanized welding. However, the company recognizes a move toward more automation.

When asked if this trend was due to the industry’s shrinking work-force concerns, Fleming dismissed the
idea. Instead, he says it’s more about
the project specs and productivity factors on the jobsite.

“There is an evolution toward mechanized welding, but it’s not necessarily about workforce issues,” Fleming says. “It’s based on the opportunity a particular project provides, whether there’s flat terrain or dealing with larger diameters. That’s what’s driving owners to look at mechanized welding as a solution. But there’s still a desire in the industry for manual welding. You have more control with a skilled worker.”

Byall says pipeline welders are among the most skilled welders around. “They’re like artists,” she says.

To take advantage of the overall trend toward mechanized welding, Lincoln Electric has made a number of acquisitions in recent years to expand its automated welding offerings, including Arc Products, designer and manufacturer of MIG and TIG orbital welding systems for a wide range of
pipe diameters.

In addition to its headquarters in Cleveland, Lincoln Electric has another manufacturing facility about 25 miles east in Mentor, Ohio. In total, the company has more than 40 manufacturing locations, including operations and joint ventures in 19 countries, including Canada and Mexico, and a global network of distributors and sales offices in more than 160 countries. But there’s something special about Cleveland.

“We take a lot of pride in manufacturing in the Rust Belt,” Fleming says. “A majority of our products used in the pipeline industry are made here in Cleveland. We have manufacturing in other parts of the world, but it’s mainly for distribution in those countries.”

Pipeline Down, Turn Around

While the pipeline sector has struggled in recent years, Lincoln Electric has continued to focus on that market.

“Lincoln Electric continued to work on improving our products, as there have been many smaller pipelines being built,” Fleming says. “We never lost sight of the industry coming back. I believe we’re in for a strong year in 2017. We haven’t dropped our focus. With the Dakota Access Pipeline and the upcoming NEXUS and Rover pipelines in our own backyard, we have to be as prepared as possible for the opportunity.”