... Bond Brothers Bonded to the Community

Bond Brothers Bonded to the Community

Integrity, respect and trust are the three components that helped Bond Brothers Inc. survive multiple recessions to become one of the Northeast’s preeminent construction firms.

Started in 1907 by Thomas Bond, the company was initially focused on completing contracting jobs for municipal as well as private entities in and around its Everett, Massachusetts, home base. About 50 years ago, the company ventured into gas transmission and distribution work and today that sector makes up one of three prongs of Bond’s Civil and Utility Construction division. 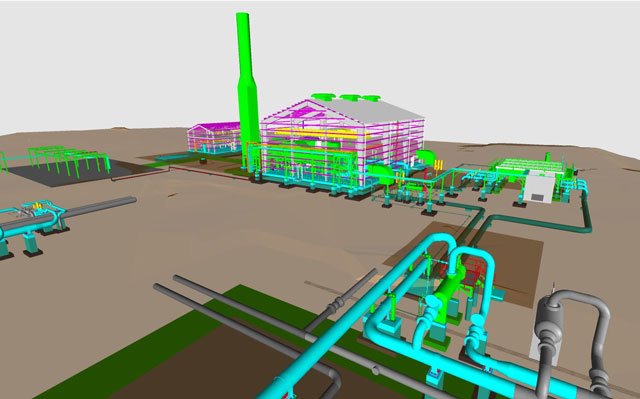 Using methods borrowed from Bond’s Building division, Gas T&D Services has the ability to use laser scanning to create a virtual environment whereby the firm can accurately map-out a project before one mound of soil is turned. This image is a laser scan of a compressor station.

“We were probably the truest sense of a horse and buggy operation. Working in a single city doing whatever was local to the area that needed to be done,” says Anthony “Tony” Bond, vice president of Gas T&D Services, a division of Bond Brothers. Bond and his sister Samantha Bond are the fifth generation of Bonds to work for the privately held construction firm. Their father Edward A. Bond Jr. is the company’s CEO.

Tony Bond started working for the company full-time 10 years ago, but joked that he really started when he first visited the company as an infant. Those stories do not end with the Bond family. Many people don’t just come to Bond for a job but a career, reflective of the fact that many supervisors, foremen and operators have been with the company 20 to 30 years and some are third generation employees.

“Some of our employees have worked their entire career in the industry with us,” Tony Bond says. “When we bring someone on, we like to keep them on board because it’s good for us, our employees and our customers. They know our culture and they know what we expect.”

That dedication and family atmosphere have helped Bond grow from one office — still headquartered in Everett — to three with the addition of New Haven, Connecticut, and Kenilworth (Newark), New Jersey. This helped establish Bond as a true regional construction firm in the last decade covering all of New England, New York, New Jersey and Pennsylvania. 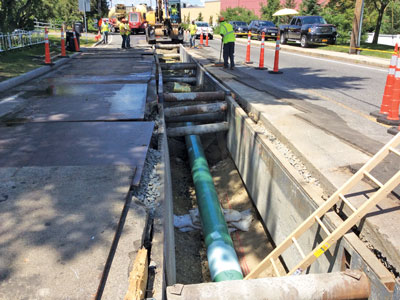 Spectra Energy’s Algonquin Incremental Market (AIM) project is one of the largest gas projects for Bond Brothers Inc. in New England since the 1990s. Here, Bond crews work on the West Roxbury Lateral in Massachusetts.

When Bond Brothers first ventured into the pipeline work, it was mostly local work in and around Boston, New Hampshire and Rhode Island working on projects like the Algonquin Gas Transmission and Tennessee Gas pipelines. As gas and other utility work increased, Bond broke into two divisions — Gas T&D Services for utilities and a Building division for conventional construction. Tony Bond has experience on both sides of the house.

As Bond increased its geographic footprint in gas transmission and distribution, to capitalize on the Marcellus and Utica shale boom, it added mainline construction and gas facility work. This growth helped Gas T&D Services earn the 2015 Oil and Gas Award’s Northeast Construction Company of the Year honors.

“It [the award] is a great representation of how we have grown and increased our footprint,” Tony Bond says. “The Marcellus and Utica shale has been an instant boom to the area. New York, New Jersey and Pennsylvania have been a great boom for us. We have been significantly involved in that area whether it is new mainline work, upgrades to existing lines or new facility work.”

“One client described us as being more like a surgeon because we keep everything clean and tight at all times,” Tony Bond says. “We are not your typical ‘blow and go’ contractor who strings out multiple joints of pipe at one time. Because of the congestion here in the Northeast, a lot of the projects we are doing require a stove pipe operation.”

The biggest project Bond is currently involved with is Spectra Energy’s Algonquin Incremental Market (AIM) project handling meter stations, compression stations and some mainline work in and around Boston. Tony Bond notes that this is one of the largest New England projects the company has been a part of since the late 1990s and one that will keep the company busy for the next year-and-a-half. 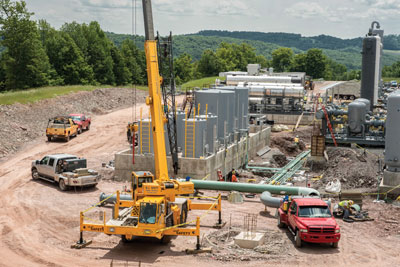 On the Cutting Edge of Tech

Though the company is 108-years-old, it does not mean Bond is stuck in the old ways of working on projects. Taking some of the best practices from its Building division, which includes construction management services, Gas T&D Services employs the use of technology on every project. From fleet management software to best maximize where equipment is used to using iPads and iPhones to perform safety, quality assurance and quality control audits.

The division also delves into the virtual design realm using laser scanning. This allows for real-life modeling of a jobsite plotting out labor, equipment, materials and scheduling before one shovel turns over any dirt.

“We can visualize where we need to be during all points of a project to be more accurate, reduce costs and deliver a project on time,” Tony Bond says. To improve efficiency, Bond has adopted the Lean Construction philosophy of using only what is needed, when it is needed and in the amount needed.

Though there is talk in the industry of work slowing down due to lower gas and oil prices, Tony Bond sees a bright future for Bond’s Gas T&D Services because of the need for natural gas pipelines throughout New England for both power generation and heating.

“There is a significant need for new pipelines and upgrading the existing pipelines because we need the additional capacity up here,” he says. “We are beginning to see in the New England market expansion to alleviate the bottleneck — with projects that Spectra is currently performing or proposing, as well as what Kinder Morgan is proposing. The multi-billion dollar projects are something we have not seen in New England for 50 years.”

That is where being headquartered in New England and being the regional contractor provides Bond an advantage. Working on AIM, and having the opportunity to be involved with future large-scale projects, serves as a great point of pride for a firm with deep roots in the Boston area and one that had a hand in laying some of the original cast iron gas lines throughout the region.

“The local communities, whether they are pro- or anti-pipeline, when they see the Bond trucks, we are familiar players. They know us and they know the people that we employ,” Tony Bond says.

“Our understanding of community concerns and priorities makes us a better contractor. It allows us to expand natural gas services throughout the Northeast while ensuring the safety and happiness of the neighborhoods where we work.”