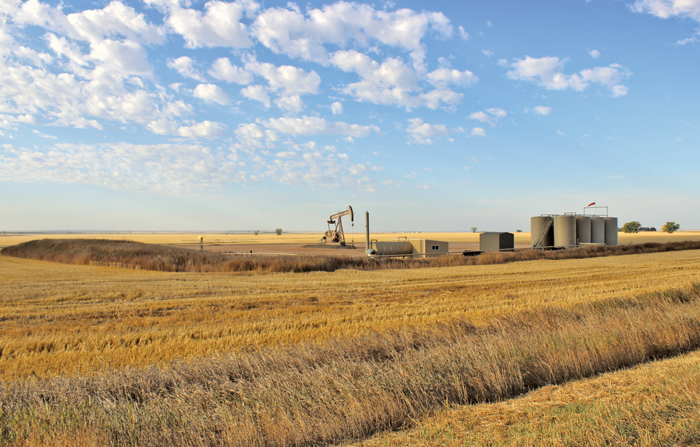 The Bakken shale play, and more specifically the Williston Basin, has created a boomtown scenario in Williams County, North Dakota, with the City of Williston at the center of the growth.

The huge growth in Williston — 14,787 people in 2010 to an estimated 20,850 in 2013 — is a 41 percent increase. The U.S. Census Bureau estimates, for Williams County as a whole, show a 32.1 percent increase and those numbers are projected to grow with no end in sight as people flock to the state looking for work. By comparison, the nationwide population increase from 2010-2013 is estimated at 2.4 percent.

Just don’t call it a boom because that would imply a bust. Both city and county officials see the growth in Williston and Williams County continuing, and the region’s leadership is in a mode of sustained economic advancement.

“It’s tremendously different. You saw a quiet community. It was a stable community with not a lot of growth. It was an aging population and you saw a lot of the young professionals [leaving] because there was not a lot of opportunity,” says Shawn Wenko, executive director for Williston Economic Development. “It’s exciting and it’s vibrant.

You are seeing a lot of new things come to the community, and our demographics have shifted drastically. We are now becoming a much younger community.”
Wenko knows firsthand about what he speaks. He was raised in Williston and left in the mid-1990s as many younger residents were apt to do. He returned in 2008 and served as the economic development office’s assistant director until the end of September. 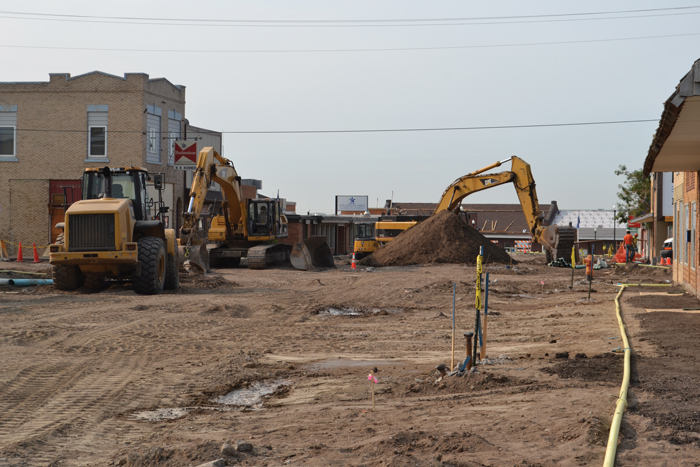 Construction in and around Williston and Williams County is the norm as the region works to update its infrastructure, which was not designed to handle the population explosion brought on by the growth in the Bakken Shale play.

Leading the Nation
Wenko refers to the growth in the Williston as “crazy” and “unbelievable.” For the last three years the city has held the title of “fastest growing micropolitan city” (cities with populations of 10,000-49,999 people) in the nation. The oil and gas boom is also at the center of growth in nearby Dickinson and Minot, the second and fifth fastest growing micropolitan areas, respectively, and as far away as Bismark and Fargo, which are the fourth and fifth fastest growing metropolitan areas in the United States.

“The state, as a whole, is doing well as far as employment growth,” Wenko says. “Really the economic engine that is driving things is coming from the west and the oil and gas industry.”

All of this growth can be traced to the Bakken shale play and from what Williston Area Chamber of Commerce President Scott Meske has read and heard from geologists and those in the oil and gas industry, it will likely be generations before the drilling levels off and the region is at a point of just maintenance and production.

Meske, a transplant from Wisconsin, was recruited because of his background in non-profit management, lobbying and advocacy to head the chamber, which was going through a leadership change. The change does not stop there. In June, Williston elected former city commissioner Howard Klug to mayor after former mayor Ward Koeser announced his retirement from office last year. Koeser held the seat for 20 years.

As someone new to Williston, Meske says it’s easy to see the impact of the oil and gas industry by visiting the local Walmart. On one recent trip, he reported that he counted 13 different state license plates, including one from Hawaii, in a single row of parked cars.

“In Williston, at any given time, there are probably well over 2,000 jobs open,” Wenko says. “It’s everything from the oil and gas industry to the food service industry and at all skill levels and wages.” 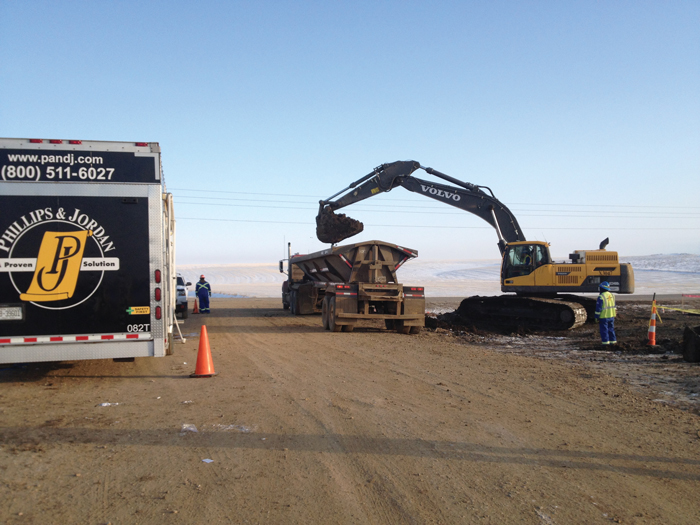 Since 2011, Phillips & Jordan Inc. has had a presence in Williston and one of the company’s goals for 2015 involves positioning itself as a true local company with a predominantly local workforce.

Meeting the Needs
People often ask Wenko what the city needs, and his reply is simple: “We need everything because we took a town that was once 12,000 people and tripled the size in a short amount of time.” The city’s population estimates, based on water usage, put Williston at about 40,000 people.

Meske has a similar approach.

As the region aims for growth, entities like the Williston Area Chamber of Commerce and Williston Economic Development are working to lobby the state legislators to funnel more funding west for continued infrastructure improvements. One of Meske’s goals is to draft a legislative action plan that looks at Williston through 2020, the year of the next census. That mirrors a recent impact statement created by Wenko’s department that projects the population of Williston to be 60,000 people and requires more than $1 billion in infrastructure improvements.

With such explosive growth, officials like Wenko and Meske say the key to sustained growth and moving away from the boom mentality is a steady stream of infrastructure improvements and increased amenities that spread the message that Williston is a great place to stay and raise a family.

And companies related to the oil and gas industry are taking note.

Moving In
Phillips & Jordan Inc. (P&J), a general and specialty contractor headquartered in Knoxville, Tennessee, opened an office in 2011 after flooding in Minot. The company’s emergency response group took on cleanup work related to the floods and while there began working with clients that it worked with in the Marcellus shale play.

“We called on several of our customers that are in the Bakken and also in the Marcellus and we never left,” says P&J President J. Patrick McMullen. “We started off as an oil and gas service provider, primarily heavy civil construction services, but since that time our business has grown extensively into the commercial construction market that has followed the oil and gas boom.”

After three years in the region, McMullen says one of the goals P&J has for 2015 is growing its Williston office into a local operation with employees and their families calling North Dakota home. The company recently became a member of the Chamber of Commerce and has plans to offer incentives for P&J employees who wish to permanently relocate to North Dakota.

“In order to do that, you need the infrastructure that supports families,” he says. “In order to support the long-term growth of the industry, people have to be willing to make North Dakota a home, and that will take a significant investment in education, a significant investment in health care and in infrastructure. And housing costs have to become more reasonable to allow people to bring their families into the region.”

This is where the work that Wenko and Meske are involved with comes into play. Unlike most municipalities, where economic development revolves around creating jobs, Wenko says his office is focusing on promoting quality of life improvements, which includes housing, infrastructure and additional amenities that are attractive to families.

“We are hoping that as more amenities open up here, as more restaurants open, as the schools continue to get better and there are more activities for people to do, we are hoping as that continues to evolve that we can get more people interested in relocating here,” says Eric Hedrick, vice president of P&J’s Oil and Gas Division in North Dakota, Wyoming and Louisiana.

Without a doubt, Hedrick says that Williston and western North Dakota as a whole is the hot spot for P&J in terms of oil and gas work, employing anywhere from 100 to 170 people, depending on the season. Of those, he estimates that 98 percent of the workforce is transient.

“Some people have been here since the beginning, but for the short-term everyone is willing to come here for the amount of hours, how much we pay and the housing, which we pay,” Hedrick says. “Everyone can come up here and endure that for six months to a year, but whenever you start pushing past that, it eventually gets to where the money is no longer a factor and it’s more a quality of life factor.” 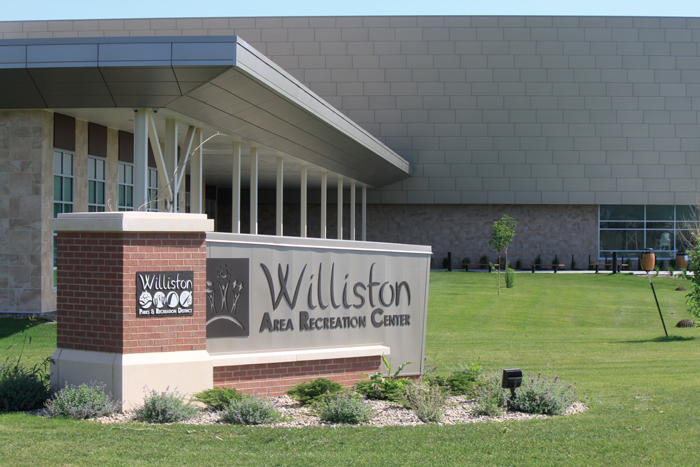 The City of Williston opened the Williston Area Recreation Center in March and as of September, its membership was nearing 10,000. Amenities, like the center, help attract families to the area, which is needed to shift from a large transient workforce. The $76 million, 236,000-sq-ft, center is funded by a voter-approved 1 percent sales tax.

Steady Improvement
Wenko says things are getting better than they were two years ago.

“In addition to hundreds of millions of dollars in infrastructure development currently under way, there are 40 major development projects also in the works throughout the city,” Wenko says. “Twenty-five of those are major subdivisions for housing, commercial and industrial development.”

In the last year, 13 new restaurants entered the market and retail is on the rise. Menard’s broke ground five weeks ago and the 60,000-sq-ft 20/20 Professional Building opened earlier this year on the Mercy Medical Center Campus.

“We are trying to catch up to our growth,” Meske says, often referring to a phrase coined by North Dakota Lt. Gov. Drew Wrigley, “It’s the challenges of prosperity.”

In the works are several North Dakota Department of Transportation projects aimed at improving traffic flow in the western part of the state, including a Williston truck reliever route, a Watford City bypass and the Williston Main Street project. And Williston is actively working to relocate and expand its airport, which recently added nonstop flights to Houston.

Wenko’s office is planning the first regional manufacturing conference for March. The goal, Wenko says, is to look at the oil and gas industry’s challenges and make them Williston’s manufacturing opportunities.

“There are so many cities in this country that would love to have those challenges of prosperity. We are very fortunate. Challenged yes, but very fortunate at the same time because 30 years ago, 25 years ago it wasn’t this way and all indications are, from everything we have seen and read, this is going to happen for a long, long time,” Meske says.

“I think everybody here in Williston is dedicated to making this city a great place to live and not just work. It’s that mentality going forward whether its businesses, local governments, downtown retail, support companies, we are all working together at this stage.”

Mike Kezdi is an assistant editor at Benjamin Media Inc. and a contributing staff editor of North American Oil & Gas Pipelines. Contact him at
mkezdi@benjaminmedia.com.