Teaming Up in the Bakken 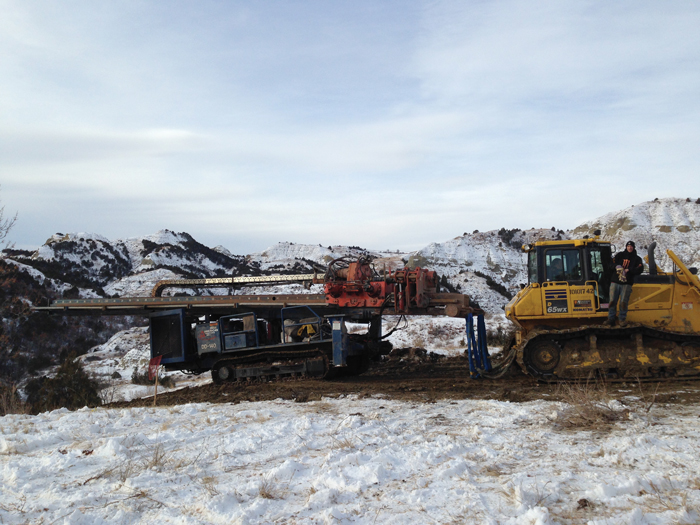 By Nathan Eastway and Steve Huibregtse

For 72 consecutive years, Gabe’s Construction Co. has maintained the focus embedded by founder Jacob Gabrielse on being a company driven by serving others. Be it the original farmers they installed field tiles for in the 1940s, the gas utilities and water and sewer districts of the 1950s, ‘60s and ‘70s, the fiber-
optic telecommunication carriers since the 1980s, or the oil and gas pipeline companies, electrical utilities and Distributed Antenna System providers of the 2000s and 2010s, that focus has remained steadfast. In order to provide this level of service, Gabe’s relies on its dedicated employees and fleet of advanced equipment throughout the Midwest (capable of working in 40 states and three Canadian provinces).

As Gabe’s continues to strive to provide services safely, on schedule, with high quality and at a competitive price, Nick Atkin, vice president of operations and this article’s coauthor Nathan Eastway, P.E., chief estimator, receive the following phone calls: “Hello, Nathan, I need a good HDD contractor and so-and-so said I should be sure to give you guys at Gabe’s a call.”

That was how Steve Franks, manager at H.I.S. Pipeline of Chatham, La., introduced himself to Gabe’s, requesting a proposal for parallel 1,650-ft HDD passes up to the top of a plateau, for a pipeline near Watford City, N.D., in the Bakken shale region. As Gabe’s had a drill crew in the Bismarck area that had just completed its pilot hole, they along with their surveyor were able to meet on location with H.I.S. to review project location, parameters, challenges and schedule. While on site for the initial walkthrough, Gabe’s was able to gather the information needed for an initial survey consisting of centerline topography that was used to construct an initial profile to determine HDD feasibility. 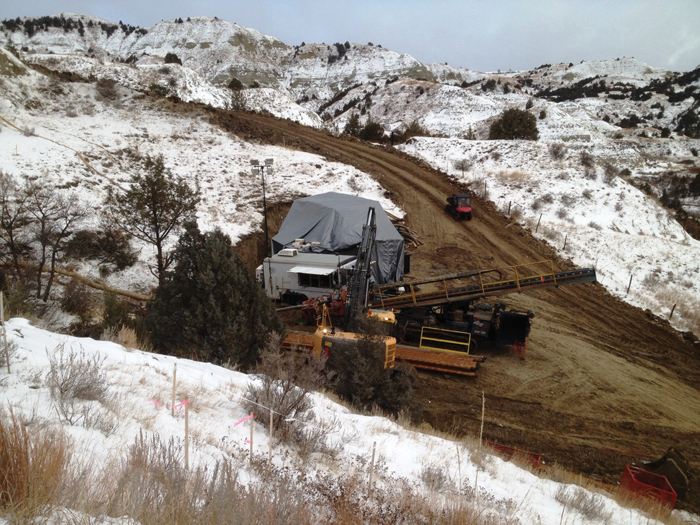 In December 2013 and January 2014, Gabe’s completed the parallel HDDs, using its American Augers DD-140 rig, American Augers MP 400 mud cleaning system, Tulsa Rig Iron TT660 Mud Pump and wireline steering. The project highlights the difficulties and challenges of working in the Bakken formation in adverse conditions. Gabe’s more than six years of experience in the Marcellus and Utica formations helped to condition the crews to combat the unique geological and terrain issues of the Bakken. This project, though small in pipe diameter (6-in. steel paralleling a bundle of 2- and 4-in. flex steel), consisted of many challenges.

Planning and Communicating
As this was the first time the two companies had worked together, Gabe’s reviewed with H.I.S. its detailed daily reporting procedures as well as the support it would need, including access to entry and exit sites, exit side pullback support, assistance with maneuvering and positioning equipment along difficult mountainous terrain.
Due to the limited cellular coverage and drive times between work sites, the detailed daily reports became the primary tool for expediting information. The reports include all information applicable to the project, including personnel, equipment and tooling, production (daily and total), weather, potential for delays, as well as a detailed chronological listing of completed events. 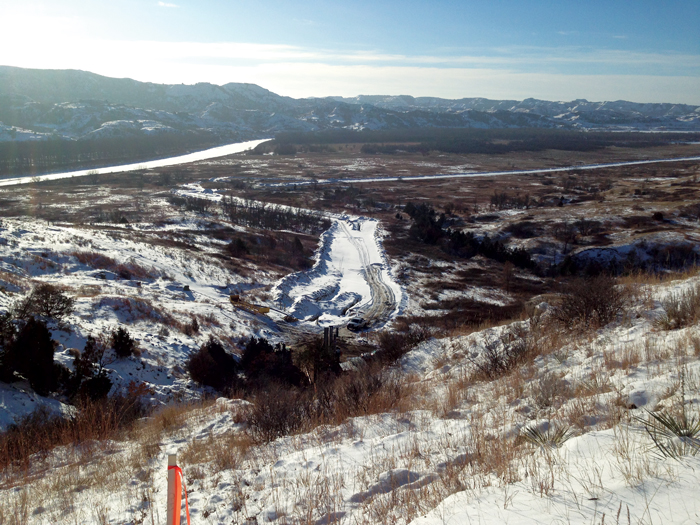 The bird’s eye view of a small-diameter pipeline project near Watford City, N.D., where Gabe’s installed 6-in. steel pipe paralleling a bundle of 2- and 4-in. flex steel for H.I.S.

Challenges Met
This pre-planning and communication between Gabe’s and H.I.S. greatly assisted in overcoming various challenges, including cold weather and site access, local economic constraints and environmental concerns.
Cold Weather and Site Access: Watford City averages a January high of 23 degrees, a low of 8 degrees and 0.56 in. of precipitation. For the month that Gabe’s was on site, the highest high was a balmy 41, the lowest low a bone chilling minus-31, and it included 2.57 in. of precipitation. The weather caused two major obstacles: Getting the equipment to the right location on the steep and slick dirt roads, and keeping them running in the bitter cold.

H.I.S. Pipeline spreadman Adam Grimes, foreman J.J. Strickland and all of its employees stepped it up and transformed an existing cattle ranch trail, with more than 400 ft of elevation change that wound its way around the edge of several steep ravines between the HDD entry and exit sites, into an suitable access road capable of maneuvering HDD equipment and materials to the work sites. This included breaking down the loads into manageable sizes so they could be lowered into position via large skids, cable winches and bulldozers.

When crews returned from time off around the holidays, it was discovered that the main access road to the drill site had been iced over, making it unsafe for use and in need of immediate repairs. H.I.S. had it repaired in two shifts, though drilling could not commence for another five days as wind chills ranged from minus-35 to minus-55 degrees. Gabe’s crew, even though it was used to frigid Wisconsin winters, found it problematic to start and maintain equipment.

In order to battle work in the “reasonable” cold weather (down to minus-20), Gabe’s, led by HDD operations director Steve Huibregtse, foreman Rusty Ott and their crew, implemented precise startup and shutdown procedures for all equipment, as well as the use of fuel supplements and long-term idling. For example, cold engines were covered and heated prior to attempting startup and the mud system was fully enclosed in a heated tent to prevent operational freezing as mud and water lines would seize up within minutes. Gabe’s crew members were diligent with these procedures, which limited the total amount of downtime and equipment failures due to adverse weather conditions.

Thankfully, the cold weather and precipitation subsided toward the end of the first HDD pass. H.I.S., being hard pressed to complete the pipeline before the federally imposed deadline due to migration and nesting of raptors, asked Gabe’s to confirm that the second HDD would be completed in time for H.I.S. to complete testing, tie-in and demobilization in order to comply with this deadline.

Huibregtse was optimistic that Gabe’s would be able to complete the second drilling pass in a more timely manner by working additional hours and on Sunday, coupled with a better understanding of the soil conditions encountered during the first HDD. For example, Gabe’s mud technician modified the drilling fluid makeup to alleviate the buildup of clay on tool joints which was previously restricting the flow of returns. Also, a significant improvement in the weather conditions allowed for an increase in the number of productive work hours per day.

Local Economic Constraints: It is well documented that the infrastructure in most of the Bakken formation is limited. This includes access to hotels and food, limited equipment rentals, repairs and support services and sporadic fuel shortages. Even though these constraints are not directly related daily drilling production, everyday tasks had the potential to become arduous.

High volumes of heavy truck, equipment and vehicular traffic on local roads, that are not built to withstand such traffic levels, created a less than desirable commute, which on occasion did impact production.

The supply of large volumes of fresh water required for drilling activities is generally limited in quantity and distribution. This requires most water to be trucked from source location to the work site, intensifying the local traffic issues. One advantage that Gabe’s encountered was that a water supply was found relatively near the work site at which the water supplier had installed a pumping and heating system, easing the overall burden of handling and transporting water to the jobsite.

Environmental Concerns: The work area was known to have documented levels of historic Native American Cultural artifacts as well as the potential for fossilized flora and fauna. In response to this knowledge, Gabe’s crews were trained to identify and report any finds or sighting of such items and remained diligently observant during excavating and dirt-work activities.

These specific difficulties and challenges are not exclusive to the Bakken formation. As the shale plays continue to intensify and operators require the gathering lines to become quickly operational in order to get product to market, it becomes more imperative that qualified contractors are employed and all critical work items are well planned and coordinated. This becomes more important as an increased number of the HDDs Gabe’s is asked to price and perform do not include engineered profiles, site specific geotechnical and soils data and are to be performed in restrictive rights of way. Even with all these challenges, though, a company such as Gabe’s, with their history of successful HDD completions, was able to make good on its motto, “When it’s Gabe’s, it’s guaranteed.”