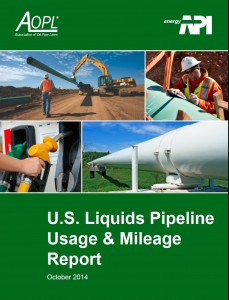 North America is currently in the middle of an energy production renaissance. According to the U.S. Energy Information Administration, U.S. crude oil production has grown by 3 million barrels per day since early 2011 and will grow another 3.1 million barrels by 2019. U.S. pipelines are extending their mileage and increasing volumes delivered to meet this challenge.

Natural gas liquids deliver industrial feed-stocks such as ethane for manufacturing uses and propane for consumer heating and agricultural uses. Together, these pipelines are referred to as liquids pipelines because the delivered products are in a liquid state when they are in the pipeline.

A copy of the report can be found here.