All Hands on Deck: An Inside Look at How NiSource, Contractor Partners Restored Service After the Merrimack Valley Incident

The response to a catastrophic event can go one of two ways. Either people step-up, take ownership and do what they need to make things whole again, or they point fingers, refuse to accept blame and generally slow down the whole reconstruction process. For the people of the Merrimack Valley — Massachusetts towns of Andover, Lawrence and North Andover — Columbia Gas of Massachusetts took the former route.

On Sept. 13, 2018, excessive pressure in natural gas lines in the region caused a series of explosions and fires to occur, ultimately affecting approximately 8,000 gas meters, which equates to about 10,300 dwellings. The explosions resulted in a mass evacuation, one person was killed and more than two dozen injured.

Leaders at Columbia Gas of Massachusetts and its parent company NiSource jumped into action to have gas service restored to the dwellings before the inclement weather and holiday season was upon the region.

“After the initial assessment of the incident, the engineering team took the lead in developing plans on the approach to restoring gas service to the impacted customers. That took them several days to pull together. What they did was break down the impacted area into eight zones,” says Jim Zucal, NiSource vice president, electric engineering, projects and construction. “The plan was viewed from that zone perspective, and the zone level was broken down to multiple sections [63 in all] where we could start reconstructing the pipeline side.”

The original plan was beginning work on or about Oct. 1, 2018, with the intent of having the pipeline work complete by Nov. 19. “As the engineering developed and matured over the next couple of weeks, we really got a better understanding of the scope and what we understood the scope to be was right around 45 miles of new plastic pipe and requalification of about 13 miles,” Zucal says.

“We had one inspector per crew overseeing the work and that allowed us to communicate effectively and efficiently throughout the day when we ran into issues,” Zucal recalls. “The inspector could talk to the construction lead, who could take it to the project manager, who could then take the issue to our construction command center. Any issues that arose could be handled in real time.”

NiSource leadership also worked closely with the Massachusetts Department of Public Utilities, meeting with them daily, as well as the public works departments in each of the affected municipalities. They met each morning to go over what was completed the previous day and what the plans were for that day. Then, in the field, they would meet with the first responders of all three communities to discuss the work plans.

In all, 13 contractors stepped up by sending crews and management staff to the region. Many came from existing NiSource projects. Three with the largest presence in the Merrimack Valley were Miller Pipeline with 82 crews and InfraSource and NPL with 34 crews each. All told, there were 210 construction crews and approximately 1,100 employees from the contracting companies for the five-week restoration project.

“The project developed quickly and grew every day. Originally, NiSource asked how many crews we could send from Ohio, then as the project progressed they asked how many we could provide from other areas,” states Dale Anderson, executive vice president, Miller Pipeline. “We sent crews from five different states, but mobilization was less complicated since the crews were moving from one NiSource job to another. NiSource knew which jobs they could shut down and what needed to continue within each region.”

Miller sent nearly 400 employees — workers, supervisors, safety and office — and more than 400 pieces of equipment to the region. This project marked Miller’s first large-scale project for Columbia Gas of Massachusetts, but its history with NiSource dates back more than 60 years.

It was a similar story for InfraSource, which sent approximately 191 employees and 350 pieces of equipment to the Merrimack Valley.

“All of our guys came from Ohio and Pennsylvania. One of the big challenges, first off, is the logistics of moving that many trucks and people. We had to find some place half way in between where we could house everyone in a hotel and have enough parking for all of the trucks, trailers and equipment,” says Butch McAreavy, operations director, InfraSource. “The other thing was, getting this put together and coordinating all of the volunteers on such short notice. We had to make sure we had the right mix of foreman, operators, laborers and fusers to staff the crews appropriately. We had to make sure we had the right people in that mix.”

To assist in the restoration process, NiSource looked to other states within its footprint to allocate additional resources to Massachusetts. NiSource leadership worked with the contractors to see how many crews they could spare, and those who were sent to the Merrimack Valley did so on a volunteer basis. According to the contractors, it wasn’t a challenge getting people to go, rather it was a matter of them asking, “When do we leave?”

“To their credit, they showed up in force and participated with us to restore gas service to our customers. Our contractor partners really stepped up and did a fantastic job supporting us,” Zucal says. “The NiSource employees stepped up just like the contractors. We had roughly 1,000 NiSource employees working up there as well.”

NiSource’s engineering team broke the 5.2 square mile region into eight zones and contractors initially began working in individual sectors within the zones. By the end of the project there were several contracting companies working to replace the pipelines along one stretch of road.

NiSource sourced all of the plastic pipe, valves, backfill, road plates and other materials. It was actually road plates that was one of the biggest material-sourcing challenges as all of the construction was completed via open-cut. The need for road plates was so great NiSource had to find suppliers across the United States and Canada, in addition to what the contractors brought on their own. NiSource also found locations for equipment laydown yards, as well as centralized aggregate and spoils facilities.

In construction, proper certification is key to completing a project safely and of a high quality. In the natural gas world, contractors and utilities alike often discuss the importance of operator qualifications (OQ) and the Merrimack Valley response was no different. There is always discussion on the idea and value of OQ portability and this project was a case study on how that works.

Since many of the contractors on the project were already on NiSource projects elsewhere, this was made a bit easier. According to McAreavy, before crews arrived at the jobsites, NiSource had already completed its analysis of who was qualified to perform what work. All of the contractors reported to a NiSource training facility where they received their orientation and OQs were checked. Those who needed training and testing received it before beginning work. And, if recertification was coming up during the length of the project, they simply had to stop at the training center for that recertification.

“NiSource stickered each hard hat so a supervisor could look at the color code and immediately determine what each employee was qualified for regardless of the task — fusing, trenching, etc.,” Anderson says. “Since our workforce came from existing NiSource projects, our employees for the most part, were already qualified to do the work.”

To make the work go more smoothly and because of the nature of the emergency, gas was shut off, so crews were working on a de-energized system. NiSource also worked with local authorities to make sure streets where the work was taking place were closed to traffic. This also made the work areas safer. This caused some headaches the first week, but once crews learned how to navigate the area that faded quickly.

Probably the biggest curveball thrown at the workers was a mandated move from hotels in the surrounding communities to the Boston Harbor, about an hour drive each way depending on traffic flow. As the weather started to cool down, and homes were still without gas service, NiSource knew the residents would need to move from their dwellings and at the same time they needed to stay local for school, work and other daily activities. It found a passenger ship to rent where the bulk of the crews could stay.

Some would look at the ship docked in the harbor as a cruise ship but McAreavy suggests using that term loosely. “In that type of ship, the rooms were meant to be shared with someone who you plan on being close with,” he says. “Typically, you are taking a lot less clothing with a plan to be on the ship for about five days with swim suits and tank tops, not Carhartts and work gear for three weeks. The food was good though.”

How did this group of contractors who came from across the United States handle this change? “While most volunteers traveled several hundred miles away from home, they knew they were going there to help restore service as soon as possible. The response our employees received while on the project was incredible,” Anderson notes.

“The residents and business owners within those communities were grateful for our crews restoring their service and provided food and beverages almost every day. We could not have been treated any better,” he says. “They knew we were there to help and understood the sacrifices our workers made in doing so. Many shared their appreciation in person and by posting on social media.” 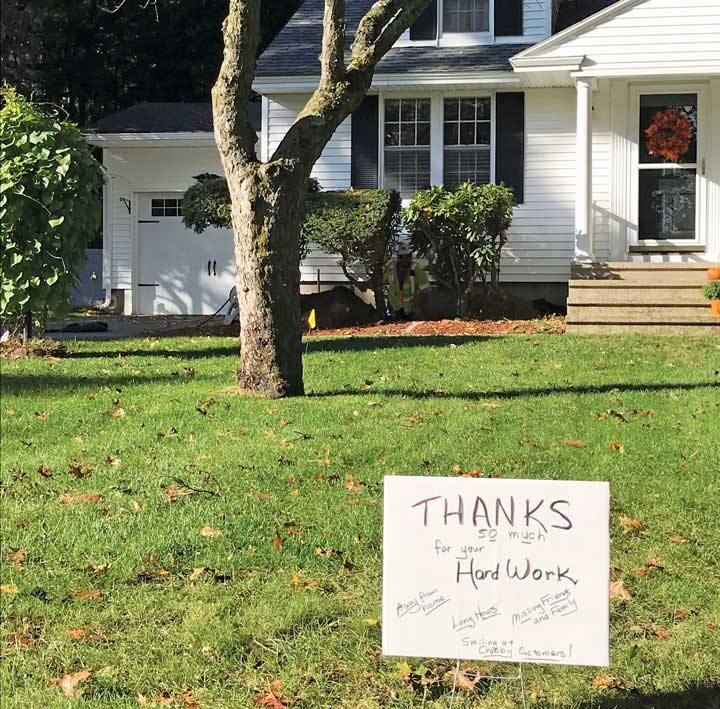 While the crews went to Massachusetts not 100 percent sure when they would return home, many were gone by the beginning of November. On Oct. 30, Columbia Gas of Massachusetts announced that the gas pipeline construction portion of the recovery efforts were complete.

In a news release announcing the completion, Columbia Gas noted that the project was completed three weeks ahead of schedule — and it was done without one accident. The repair work inside residences and businesses required to reconnect to the gas system was substantially complete on Dec. 12.

“We are proud that we were able to complete all of this work without any recordables and that is a testament to the contractors, workers and the safety teams out there staying focused with long days and long weeks,” Zucal says. “Having construction, engineering and other resources onsite to make real time decisions was paramount to a smooth project. Having and developing the relationships with the communities and the contractors was critical.”

As officials from Columbia Gas of Massachusetts and NiSource laid out the plan to replace approximately 45 miles of pipe and requalify 13 miles in the Merrimack Valley from the end of September to Nov. 19, they looked to several contractors to provide the necessary workforce.

The 13 contractors answering the call to provide pipeline services were: