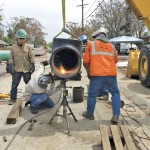 AGA works integrally with its members to identify and share best practices that continually enhance the operational excellence of the industry. 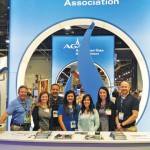 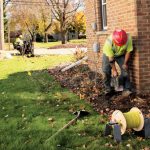 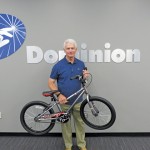 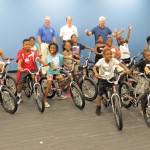 The AGA’s priority is ensuring the safe and reliable delivery of natural gas to homes and businesses throughout the country. An integral part of that is working with the local utilities in the communities they serve. This is evidenced by AGA and Dominion teaming up to build bikes for the Rainey Institute during the 2016 Republican National Convention.

For nearly 100 years, one organization has stood at the forefront of advocacy for the nation’s natural gas industry, continually pushing for the safe and reliable delivery of natural gas to homes and businesses. The American Gas Association, or AGA as it is commonly known, represents more than 200 energy companies — the local utilities operating in and around homes every day of the week.

This fact makes the AGA’s mission all the more important. Many view these local utilities as more of a partner than a business in the communities they service.

According to the latest data from the AGA, natural gas accounts for roughly a quarter of the United States’ energy. Natural gas is ubiquitous and the need for the clean-burning fuel continues to grow even as the country looks to increase its use of renewable energy.

“AGA and its member companies work tirelessly to help ensure the safe and reliable delivery of clean, efficient natural gas to the more than 177 million Americans that use it today,” says Dave McCurdy, AGA president and CEO. “While there have been concerns in previous decades about a shortage of natural gas, thanks to technology developments, natural gas is now domestically abundant with more than a 100-year supply.”
An Abundance of Gas

Though AGA advocates on behalf of its members on a wide variety of topics, the priority lies with the safety and reliability of the vast natural gas pipeline network — approximately 2.5 million miles — that carries the fuel across the United States.

“There are more than 72 million residential, commercial and industrial natural gas customers in the United States, of which 95 percent — just under 69 million customers — receive their gas from AGA members,” McCurdy says. “AGA provides clear value to its membership and serves as the leading voice and facilitator on their behalf in promoting the safe, reliable and efficient delivery of natural gas to homes and businesses across the nation.”

The membership in AGA goes beyond the local distribution companies. It encompasses contractors, engineers, manufactures and other service providers to the gas industry. Among other things, membership allows these providers access to industry and AGA experts, participation in AGA committees and programs, and access to AGA reports, analysis, market research and publications.

All told, through all levels of membership (full, limited, international, international affiliate, associate, association honorary and foreign honorary), AGA boasts a roster of more than 675 organizations worldwide. Its role as an international advocate for the natural gas industry came after the organization hosted the 17th annual World Gas Conference in 1988. AGA is set to host the triennial conference in 2018 in Washington, D.C., to coincide with the AGA’s 100th anniversary.

Thanks in part to the efficiency, affordability and reliability, natural gas is the leading energy source for homes and businesses. Since 1990, approximately 600,000 miles of distribution mains and service lines have been added to the nation’s natural gas system. This increase serves 17.5 million customers, an increase of 32 percent.
“The domestic abundance of natural gas offers an unprecedented opportunity to provide an affordable, clean energy that can also enhance our nation’s economy and security,” McCurdy says. “While the use of renewables continues to grow, the reality is that we need natural gas as a foundation fuel for the foreseeable future.”

Today, natural gas fuels more than homes and businesses, it also fuels vehicles, helps generate electricity, supports other forms of renewable energy and it has grown in the manufacturing industry as a feedstock as well.

This need for natural gas comes at a time when the supply is abundant and can grow thanks in part to development of shale plays across the North American continent. However, it also comes at a time of increased scrutiny and opposition. Despite pipelines being the safest mode for transporting the gas, the misinformed are proving to be a vocal minority, but AGA and similar organizations are doing their part to make sure the right information is out there.

“The natural gas industry offers a great product to meet the needs of our customers and the economy. A key challenge facing the natural gas industry is ensuring that discussions on the role of natural gas from an environmental perspective are based on current, accurate data,” says Carl Levander, executive vice president of regulatory policy and corporate affairs for NiSource Inc.  “AGA plays a key role in developing and sharing fact-based perspectives on current issues and serving as a voice for the value our product offers.”

In 2015, the AGA launched its Peer Review Program. The safety and operational practices review program is voluntary and participants receive the reviews from their peers, creating an open dialogue to share best practices and identify opportunities to better serve the customers. More recently, in February 2016, the board of directors updated the AGA’s “Commitment to Enhancing Safety” document. The document outlines voluntary actions being taken by AGA or individual operators to help ensure the safe and reliable operation of the nation’s natural gas pipeline system. The actions are broken into three groups — Building Pipelines for Safety, Operating Pipelines

“While there are many things AGA does, I particularly appreciate their role in bringing members together and providing a forum to discuss challenges facing the industry,” Levander says. “This can lead to helping members develop a common point of view on important issues, which AGA uses effectively in advocating on many fronts.”
In addition to improved safety, another benefit of the industry’s aggressive capital improvement projects is a significant decrease in methane emissions from the natural gas system.

McCurdy points to a report published in 2015 by a team of researchers from Washington State University and sponsored by the Environmental Defense Fund. The report found that as little as 0.1 percent of natural gas delivered nationwide is emitted from local distribution systems. Researchers noted that the methane emissions were 36 to 70 percent lower than current EPA estimates, which are based on a study from the 1990s. This decrease is thanks to upgrades in metering and regulating stations, better detection equipment, changes in pipe materials and regulatory changes.

“In an effort that will help contribute to this declining trend, nearly 40 AGA-member natural gas utilities launched the EPA Natural Gas STAR Methane Challenge Program,” McCurdy says. “This is a voluntary partnership between EPA and the U.S. oil and natural gas industry, focusing on achieving cost-effective and flexible methane emission reductions from natural gas operations.”

As with many trade organizations, AGA works closely with its member companies and serves as a liaison to regulators and policy makers in Washington, D.C., and at the state level, and the organization is instrumental in its input on several pipeline safety-related acts.

“With an ever-changing regulatory landscape, it has become more and more important for gas utilities to compare notes on how best to react to those changes.  In response, AGA has provided more opportunities for companies to share best practices and stay ahead of the curve,” says Jeff Murphy, vice president and general manager of Dominion East Ohio. “Responding to proposed pipeline safety regulations can be extremely challenging.  AGA has done an outstanding job of formulating industry positions on those proposals and helping stakeholders understand the potential consequences of those proposals on companies, their customers and the public at large.”

The AGA lauded the passage of S. 2776, the Securing America’s Future Energy: Protecting our Infrastructure of Pipelines and Enhancing Safety Act (SAFE PIPES Act), which President Obama signed into law in June and on July 7, AGA submitted extensive comments on the Pipelines and Hazardous Materials Safety Administration (PHMSA)’s Safety of Gas Transmission and Gathering Pipelines Proposed Rule. The organization also worked closely to support the Pipeline Inspection, Protection, Enforcement and Safety Act of 2006 and the Pipeline Safety, Regulatory Certainty and Job Creation Act of 2011.

“The SAFE PIPES Act will improve pipeline safety by closing gaps in federal standards, enhancing the quality and timeliness of rulemakings, promoting better usage of data and technology and providing regulatory certainty for natural gas utilities that are actively enhancing safety for their customers and communities,” McCurdy says. He added that the 2006 and 2011 acts, “Contained significant changes to pipeline safety programs and created numerous new programs to further improve industry safety. AGA member companies have implemented many aspects of these programs either through regulations or voluntarily.”

As for PHMSA’s Safety of Gas Transmission and Gathering Pipelines Proposed Rule, AGA voiced its support for the intended pipeline safety benefits but has several areas of concern with the proposed modifications to the pipeline safety regulations.

“AGA and its member companies believe PHMSA’s proposal fails to consider the extensive existing regulatory and voluntary safety initiatives currently in place. Ultimately, this imposes prescriptive and burdensome requirements on operators that will likely not address the perceived regulatory pipeline safety benefits,” McCurdy says. “AGA’s comments are intended to provide PHMSA with the feedback and suggestions necessary to develop the Proposed Rule into a regulation that will make a meaningful enhancement in pipeline safety.”

Another issue on the AGA docket is cybersecurity. According to McCurdy, in 2014, there were 79 hacking incidents at energy companies investigated by the Computer Emergency Readiness Team, a division of the U.S. Department of Homeland Security. There were 145 incidents the previous year.  On Nov. 17, 2015, AGA hosted an inaugural Cybersecurity Executive Summit, which brought together leading executives from across the nation. The event provided an opportunity for informed discussions regarding cyber interdependencies, increased awareness of shared vulnerabilities, as well as recently introduced cybersecurity legislation.

“One major takeaway — cybersecurity risks are real and the protection of our natural gas industry from cyber threats is our shared responsibility,” McCurdy says. “As we move forward, we must guard against complacency and the misconception that a successful cyber attack ‘won’t happen to us.’”

Looking ahead, AGA and the industry as a whole are planning for changes in the American workforce thanks to retirements and new technologies. A properly skilled and qualified workforce is necessary to keep up with capital improvements to maintain and safe and reliable natural gas system. The topic of workforce planning and operator qualifications was one of the key topics of the 2016 DCA-AGA Utility Contractor Workshop, held April 4-6 in Chicago. This was the third such workshop with the DCA.

“Our core value and top priority is, and always will be, safety,” McCurdy says. “AGA and its member companies are committed to promoting a positive safety culture among their employees throughout the natural gas distribution industry. All employees, as well as contractors and suppliers providing services to AGA members, are expected to place the highest priority on employee, customer, public and pipeline safety.”