... After the Storm: One Year Later - North American Energy Pipelines

After the Storm: One Year Later

An Update on Vermeer’s Rebuilding Progress After a Destructive Tornado

On July 19, 2018, Vermeer Corp. was knocked on its heels when an EF-3 tornado tore through its Pella, Iowa-manufacturing campus. Two of seven plants were lost and a third was left heavily damaged. No serious injuries were sustained.

One year later, work continues to rebuild the structures lost on the Vermeer Mile. What has transpired over the last year since the destructive storm? We checked in on the company’s substantial rebuilding and rebooting plans. Vermeer president and CEO Jason Andringa and president of industrial solutions Doug Hundt gave us an update.

“Almost immediately, our mantra became, ‘Never waste a crisis. Instead turn it into an opportunity,’” Andringa says. “Maintaining this perspective, the Vermeer team is working with a team of experts to plan and design a new manufacturing facility. We have cleared the area where Plants 5 and 6 sat and the facility being planned for this space will bring together best practices in safety for our team members, advanced manufacturing efficiencies and workspace improvements.”

Plants 5 and 6 — which housed manufacturing of Vermeer’s small and medium size HDD drills, utility tractors and some of its large grinders — were deemed a complete loss. They were torn down (using some Vermeer equipment) and new facilities are in the process of being built. Starting from scratch with these building afforded Vermeer officials to take their time to determine how make upgrades.

“Plans for the new [plants] in this space continue to refined with the goal to open in late 2020,” Andringa says.

Hours after the storm — and when it was clear no one was seriously hurt — Vermeer leaders set two goals: Get all employees back to work as soon as possible and resume full production as quickly as possible. Both those goals were achieved in under 45 days. Vermeer’s 3,100-sq ft Global Pavilion, in the aftermath of the storm, was repurposed as the manufacturing plant’s primary parts receiving area.

Today, the Global Pavilion has, for the most part, returned to its original purpose. “The majority of parts have been moved closer to the lines they belong to,” Hundt says. “In fact, the space was cleared in January so we held our all-team meetings in the Global Pavilion Arena for the first time since the tornado.”

On July 16, Vermeer held a groundbreaking for a monument commemorating the buildings destroyed by the tornado. 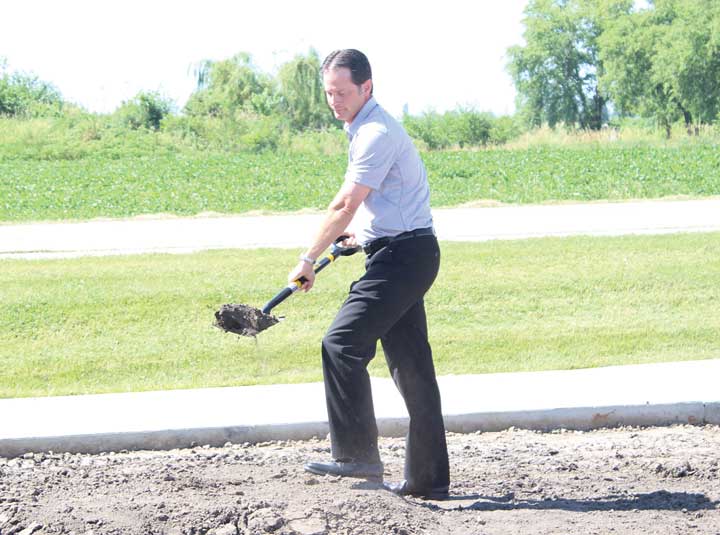 Vermeer president and CEO Jason Andringa at a groundbreaking ceremony on July 16 for a monument to commemorate the buildings destroyed by an EF-3 tornado on July 19, 2018.

The first facility scheduled to open this summer is a new engineering and R&D building. Dubbed “Shop 48” in honor of Vermeer’s late founder Gary Vermeer (Andringa’s grandfather) and the year the company was founded (1948), this building will bring together all of Vermeer’s engineering groups under one roof. With more than 100,000 sq. ft of space dedicated to building and testing new equipment, team members began to move into this space in August.

Scheduled to be completed in fall 2020, Plant 7 was formally announced on July 16 as the new facility being built where Plants 5 & 6 once stood. Nearly 500,000 sq. ft of manufacturing and office space will expand beyond the original manufacturing footprint that took up just less than 400,000 sq. ft of this area. The new facility will connect to the original Plant 7 that was damaged in the tornado but repaired in the months following. Together, they will take on the name Plant 7.

Also recognized was the new Eco Center. Replacing the one lost in the tornado, the new building will be placed behind Plant 1 and open its doors in January 2020.

The day of the tornado was a day of celebration at Vermeer Corp. More than 480 of Vermeer’s dealers and customers were onsite to celebrate the company’s 70th anniversary. Once the storm was over, efforts to account for all employees and guests were the priority. Miraculously, only minor injuries were sustained, which Andringa attributes to the company’s crisis and safety management plan that was put into action.

After the storm, company officials took the occasion to enhance its already successful safety/crisis program. “While we are proud of the way our team took safety seriously on July 19, we still had areas of opportunity,” Hundt explains. “When you practice a tornado drill, like we do regularly, we never really practiced what happened after. During drills before the tornado, we would sound the all clear and team members would go back to work. Today, we have implemented an accountability measure. Team members have rally points outside of our facilities. The purpose of this is to be able to quickly account for our team members so we can understand if everyone is okay or if we need to focus first responder support. It is a simple process that only adds a couple minutes to our tornado drills, but makes a difference as decisions are being made in the event of a crisis.”

Andringa notes that you can always be better and Vermeer used this setback as an opportunity to improve in all aspects of its business. Takeaways from the yearlong experience include: the importance of a strong culture. “In those moments of crisis, the culture you have built comes to light in ways you’ve never imagined,” he says.

He also notes the importance of communication in a crisis and its factor in recovery. “By informing team members, dealers, customers and community every step of the way, we were able to better take care of those around us — from team members waiting to return to work to dealers equipping their customers.”

Finally, having clear goals to work toward. “[This] gave our team members a mission to rally around work toward together,” Andringa says.

Looking back on that terrible day, Andringa and Hundt remember more than just the debris and loss of structures.

“I had been in our corporate headquarters, located on the west end of the Vermeer Mile, during the tornado. Once the storm had passed, I made my way across the Mile to understand the impact of the storm. It was sensory overload as my mind was trying to process all I saw and heard,” Andringa remembers. “As I made my way to where leadership was gathering, team members waved or said hello. At first, I simply waved and urgently kept moving along. But as reality set in, I took a little longer to talk to team members. As I talked with them, I saw fear and shock. But most importantly, I already saw resolve in their eyes. Less than an hour after the storm our team members were already trying to clear debris and pick up the property. We had to ask them to stop for best safety practices, but their determination and resolve was inspirational. It was the spirit of Vermeer Strong.”

That resolve also assisted Vermeer getting back to its “new normal” as quickly as possible, particularly in reference to filling orders. At the time of the storm, the markets Vermeer serves were growing and demand for products was across all of its business units, with a backlog for its larger, more complex equipment. “Customers investing in our big yellow iron experienced a little longer backlog as we transitioned those lines,” Hundt says. “However, our dealer network did a great job of working together to meet the needs of our customers and closed any gaps in getting our customers what they needed.

“In the end, we had the most successful year in Vermeer history, including a higher volume output than the year before” he notes.

Andringa notes that many things stand out to him about that day. “The two most significant for me are pride and gratitude,” he says. “Every day, Vermeer works hard to take care of those around us, build tough equipment and make an impact on our communities around the world. On July 19 and in the days following, we were overwhelmed with support from across the globe.”

He also extends his gratitude to the first responders, community members, churches, customers, dealers, competitors, team members, industry partners and others who reached out to Vermeer in the aftermath.

“The 30 days that followed [the storm] were incredibly impactful,” Andringa says. “I hope to have a long career ahead at Vermeer, marked with many milestones t come, but the superhuman strength demonstrated by t eh Vermeer team in those 30 days is something I will forever be most proud of.”