... Do Your Homework When Developing Oil and Gas Terminals

Do Your Homework When Developing Oil and Gas Terminals

The United States has become a global growth leader in crude oil production, adding nearly 1.2 million barrels of capability per day from 2008 to 2012. In 2015, U.S. crude oil production rose to 9.48 million barrels per day (bpd), the highest annual rate since 1972, and an increase of 90 percent from 2008. And it’s not just oil that’s ensuring the country’s top billing as an energy producer, it’s also natural gas. As the American Petroleum Institute (API) reports, the growth of natural gas liquids production, at a rate of more than 500,000 bpd oil equivalent, has brought the total increase in liquids production capacity to approximately 1.7 million barrels since 2008.

This advancement has inevitably led to a corresponding need for efficient systems to store and distribute the extra product. The demand for supporting infrastructure is complicated by the fact that the increase in production and reserves is not entirely from traditional states, such as Texas, Oklahoma and California, but also, in large part, from North Dakota, Montana, Pennsylvania, Ohio and Colorado, where there is much less transportation infrastructure in place. Obviously, new terminals with efficient access to railcars, truck lines and marine facilities are good, cost-effective solutions to the problem. Owners are also finding that many of these facilities are practical and profitable beyond just oil and gas transportation, and can be used to store and distribute fracking sand, construction materials and other, similar products.

For various reasons, there is a lag between demand and the ability to bring these terminals on-line. This challenge can feed a tendency for pipeline operators to hurry the decision-making process and overlook hard regulatory and contractual realities. Availability of capital, inexpensive land or market access are key considerations, but only part of the bigger picture. Without developing an overall approach to the development process, a hurried project may suffer.

The Devil is in the Details

Hub or transload terminals can be large and complicated, involving a number of complex systems. Others can be relatively simple. Regardless, though, their design, construction, permitting and operations all have certain common needs that require considerable advance planning. When considering the development and operation of a terminal or the possibility of partnering with a third-party shipper to store extra product, here are some considerations to alleviate some of the strategic concerns associated with such an endeavor, and proactively manage regulatory issues that may arise.

Hub or transload terminals can, and usually do, involve such systems as rail loops, loading facilities, administration and support buildings, storage tanks, marine vessel loading equipment, transfer piping, boilers, electrical transmission lines, digital controls and water supply systems. Design and construction contracts for these facilities must take into account the obvious need to seamlessly coordinate and schedule the appropriate systems in order to ensure that they work together. In many cases, the form of contract is governed by the need to coordinate with regulatory requirements and schedules. To that end, the design and construction are often combined as design-build, EPC or EPCM agreements.

Prior to construction, thought must also be given to zoning and building permits. These are local matters, often accomplished at a municipal or county level. Fast-tracking a terminal project is often a laudable goal, but one which is unrealistic if the proper zoning and site permitting are not in place. At times, this can be a slow and painstaking process that goes on for several months or even years.

Depending on the state and the county, conditional use, special use or simple construction permits can be required. Other counties have more overreaching requirements. For example, Colorado uses a “1041 permit” process which allows local governments to identify, designate and regulate access and activity of state interest, including pipelines and terminals. Certain jurisdictions can also require operation and maintenance or spill prevention plans as a part of the construction permitting regime. Although it can sound simple and straightforward, the process can be quite intricate, and increasingly, political and contentious. It may be necessary in some instances to consider how to build and operate around existing and planned neighborhoods. Many facility owners and developers consider the use of buffers to reduce the likelihood that facility operations will have adverse effects on neighboring communities. For example, one of the quickest ways to stall a construction project is to run afoul of local zoning agencies charged with strategic assessment of land use patterns and the need to balance approvals for transportation fuel facilities with residential, open space, recreational and commercial development.

As one might expect, the range of contracts necessary for terminal operations can be fairly broad. The central form of agreement for a terminal services contract typically involves an agreement between the terminal owner and an owner or producer of oil and gas (or other) products to facilitate the transport of products via truck, railcar or vessel. These agreements, sometimes also in the form of an “access agreement,” typically include provisions for (a) throughput measurement and payment; (b) operations, receipts and deliveries; (c) product quality standards; (d) title, risk of loss and custody; (e) limitation or liability and damages; (f) safety; and (g) insurance.

Another typical and useful agreement is an operating contract which requires a third-party to actually operate the terminal for the owner. These types of agreements can include requirements as to the manner in which the actual transloading, metering, measurement and inspection are accomplished.
Purchase and sale agreements usually accompany operating contracts. These documents involve arrangements to sell and deliver and purchase and receive bulk petroleum or other products, and they cover the deliveries via truck, railcar or marine vessel. Provisions governing Canadian or Mexican transactions and can also be coupled with rail or marine vessel provisions.

The number of permits required for oil and gas terminals, particularly if they involve rail lines or marine operations can be significant. To use California as an example, that state includes 58 counties, almost 500 cities, more than 2,000 special districts and over 100 Native American sovereign nations.

The permitting process for oil terminal facility construction and operations, depending on the location, complexity and community opposition, can obviously be time consuming and a great deal of work, sometimes taking several years. Jurisdictions that may have some authority and may require applications or permits can include cities, counties, states, sovereign tribes, special districts and the U.S. government. The chart on p. 26 represents a sampling of the myriad policy regulations companies must take into account when constructing a terminal or partnering with a vendor to house excess supply. Lean on your legal counsel to help navigate various federal, municipal and state regulatory requirements and put in place a plan to do so.

Depending on the type of terminal, other regulations may also come into play. To again use California as an example, a marine oil terminal facility could also be governed by the California State Lands Commission, Coastal Commission, San Francisco Bay Conservation and Development Committee. In Southern California, certain local governments, such as the cities of Los Angeles and Long Beach, have been granted trusteeship of tide and submerged lands offshore of their coasts by the state. Various Executive Orders and Presidential Directives, including the recent Cybersecurity Executive Order, may also apply when considering information technology infrastructure.

An analysis of the overall risk in the ownership and operation of oil and gas terminals is well beyond the scope of this article. Possibilities include spills, releases, product losses, injuries, property damage, security and cybersecurity incidents, derailments and decommissioning requirements. Construction and design risks can also include construction delays, cost overruns and construction defects. The various agreements mentioned above emphasize the need to carefully weave together the possible exposure to liability created by permits and regulations, as well as the operations themselves, into indemnities releases and assumption of liabilities and insurance provisions.

Suggestions for navigating this process, some of which will be quite obvious, include:

There’s no getting around it – before export terminals and supporting infrastructure can be built, a terminal developer is subject to an onerous regulatory process and needs to fully consider the full range of contractual rights and obligations it will need to put in place. The need for and value of new hub and transload terminals are beyond question. Just be sure that legal considerations are reviewed carefully and that your preferred counsel is a partner in navigating the complex, ever-evolving regulatory landscape to ensure your company is in compliance. 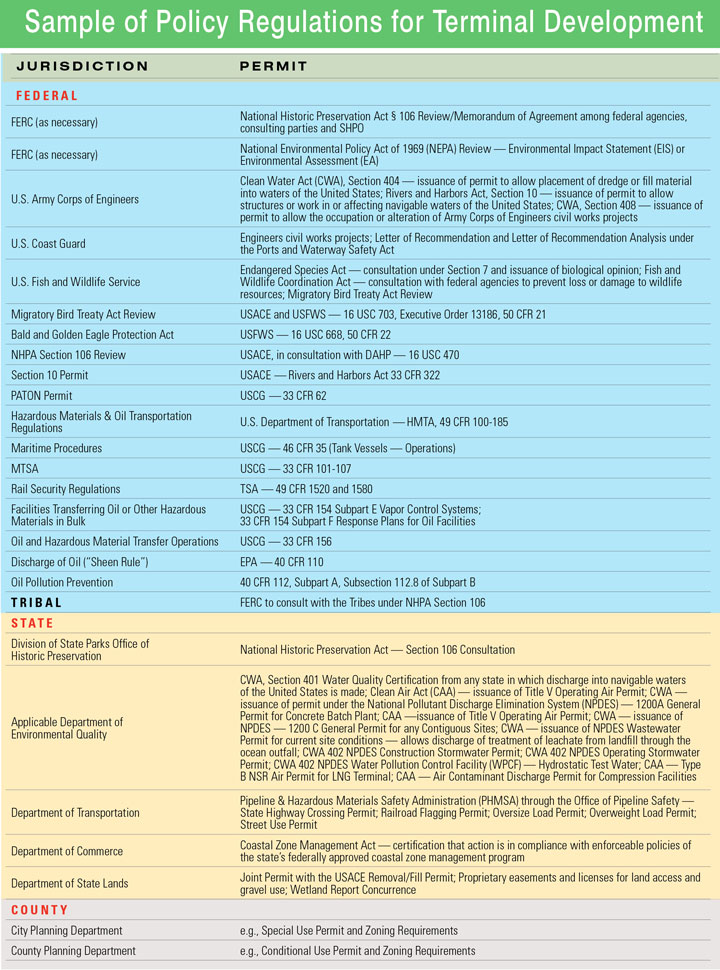 Dan Frost is a Partner at Snell & Wilmer LLP. He focuses his practice on energy infrastructure and design construction, particularly in the realm of permitting and federal processes. Contact him directly at dfrost@swlaw.com or (303) 634-2038.