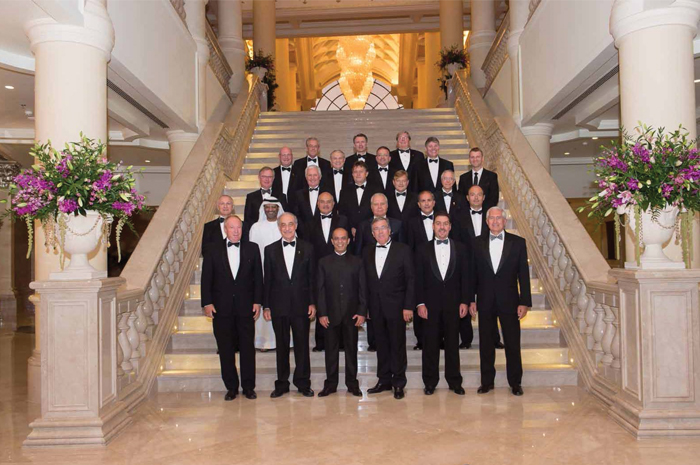 The 2014-2015 IPLOCA board of directors gather at the annual convention in Abu Dhabi.

The International Pipeline & Offshore Contractors Association held its 48th annual convention in Abu Dhabi, United Arab Emirates, at the Ritz-Carlton Hotel and within eyesight of the remarkable Sheikh Zayed Grand Mosque. This was the first IPLOCA Convention held in the Middle East in many years. The location drew more than more than 600 delegates. Najib Khoury of Consolidated Contractors Co. and IPLOCA’s 2013-2014 president was pleased to host the convention.

Conventioneers were also treated to a presentation by Sheikh Nahayan Mabarak Al-Nahayan, Minister of Culture, Youth and Community Development, for Abu Dhabi.

Other presentations included, IPLOCA’s Health and Safety Award Program and the Environmental Award. Statistical data regarding both can be found at IPLOCA’s website,  iploca.com.

Cultural activities included a tour of Abu Dhabi, a tour of Dubai City and a catamaran cruise. A special treat for all delegates was  “An Arabian Adventure” far out in the desert away from Abu Dhabi.

At the closing Banquet, Jean-Claude van de Wiele, of Spiecapag, was introduced as IPLOCA’s 2014-2015 president. The 2015 convention is set for Oct. 5-9 in Singapore.