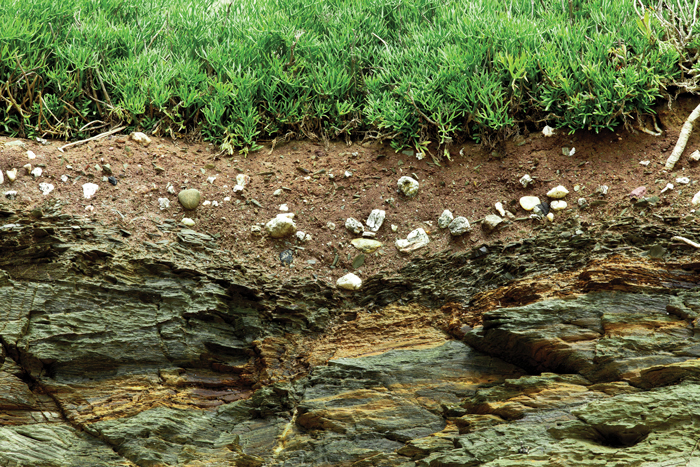 When Franek Hasiuk, Ph.D., first started experimenting with 3D printing and shale rock pore networks, he knew he was on to something very exciting. 3D printing gave researchers the ability to make the impossible, well, possible:  Very large things could become very small. Very small things could become very large. With the touch of a few buttons, you could take an entire oil basin and shrink it, peel away the layers of rock and hold them in the palm of your hand.

You could also create perfect, endless replicas of rock samples with identical porosities — an invaluable tool when, say, testing different hydraulic fracturing fluids for complex networks of shale rock or trying to understand how a rock’s pore network behaves when exposed to certain chemicals.

Historically, questions about the relationship between pore networks and fracturing fluids have been very hard to answer accurately. Chunks of rock are typically destroyed during these types of experiments, which means additional research must be conducted with new rock. And even if the new rock is from the same reservoir, there’s no guarantee that it will have an absolutely identical pore structure as its predecessor. There is currently no standardized pore network that geologists and oil and gas researchers could use as a measuring stick.

In other words, Hasiuk says, “We don’t have a widget to stick in there; we’ve never had a standard we can take and put in a machine . . . we’ve always had to interpret data based on some sort of messy natural sample.”

But with the advent of 3D printing, this kind of research could potentially get a lot less messy.  Hasiuk’s lab at Iowa State University is currently working on creating a standardized technique that would replicate rock porosity and give researchers a standard widget to work with — a widget that could be reproduced instantly at any lab across the country — or the world.

That’s just one possible way that rapid prototyping is benefiting the oil and gas industry — and many other industries. From universities to oil and gas exploration companies, researchers and manufacturers are embracing the technology. “[3D printing] really does provide this transformative technology,” Hasiuk says. “It’s cool. It’s new. It makes you feel like you’re really living in the 21st century.” 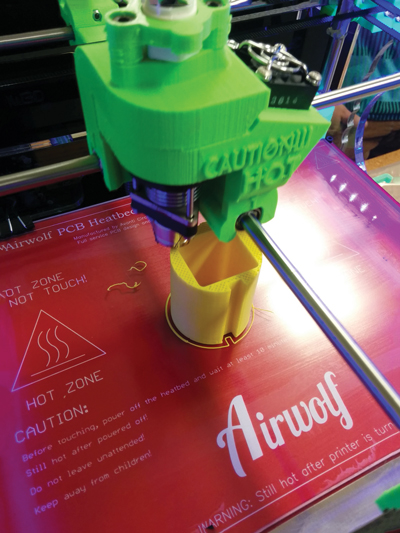 Futuristic Solutions to Everyday Problems
The technology that just a few years ago sounded like something out of science fiction is now being used in hundreds of industries. In the food and beverage industry, professional bakers can purchase the ChefJet, a 3D printer from 3D Systems Corp. that makes elaborate cake toppers and decorative candies. In retail, 4 AXYZ, a Seattle-based company, is experimenting with “smart wood” that features embedded electronics for home automation. Aerospace companies are using the technology to dramatically reduce the amount of titanium wasted in the production of airplane parts.

In the oil and gas industry, 3D printing is revolutionizing the industry in a variety of ways. Engineering departments are using 3D printing to create standardized sample parts for use by engineers across the globe, an idea that, much like Hasiuk’s standardized rock samples, will go a long way toward achieving consistent results in the design and manufacturing of parts.

The challenging hydrogen environment forced design changes and considerations that would not usually be required in a more standard inline inspection (ILI) tool design.

For example, all metal pieces — from large tool structures to the smallest screw — had to be considered for protection from hydrogen embrittlement. Hydrogen embrittlement causes many materials commonly used for inline inspection to become brittle and break down very quickly.

One of the most critical parts, the exposed sensors — responsible for transmitting clear data about the line’s condition — presented a new challenge: The materials that could withstand hydrogen embrittlement were unlike anything TDW’s engineers had worked with before.

That’s where 3D printing came in. With 3D printing, engineers could build sample parts to figure out the best design options for this challenge.

When building something as complicated as a new hydrogen inspection tool, there are plenty of options to investigate. Take wires, for example. In prototyping, routing wires can be a challenge. Tools are typically built in separate pieces using computer-aided design (CAD), which means that it’s virtually impossible to see if the wires will fit correctly until the prototype is built. Wires vary in thickness and bend differential, creating unexpected kinks. Until an engineer actually lays down the wires on a test model, they’re really just making educated guesses about whether the pieces will fit and how they will behave.

Reducing Duplication, Increasing Efficiency
Using traditional methods, an engineer would model a new part in CAD, send the drawing to the machine shop and then wait a few weeks to a month for a prototype to be constructed. Only then could the engineer run preliminary tests to find out if the new piece was compatible with the other pieces in the design, and, of course, if the wires would fit. Using 3D printing, though, an engineer can send a CAD design straight to the printer and have those questions answered in just a few hours.

Needless to say, being able to quickly print out test designs can save months during a typical R&D process.
3D printing also aids with collaboration. When engineers are developing different tools through multiple teams, repetition of work is hard to avoid. Although companies keep libraries of virtual CAD parts, engineers can’t physically see how the parts would work into their designs, so they often end up spending hours designing and recreating parts that were readily available in the library. 3D printing allows companies to create a physical counterpart to these virtual libraries:
Instead of turning to virtual designs, engineers
can choose pre-made plastic parts from in-house “boneyards.” Pieces like U-joints and sensor arms naturally become uniform, not because “the rules say we should use the standard design,” but because engineers can see for themselves that the standard design will work.
As for the hydrogen line inspection tool — with the help of 3D printing rapid prototyping — it was delivered to the operator on a greatly reduced timeline, despite the unique challenges faced.

In other words, 3D technology is changing the game. “Rapid prototyping is spanning the gulf between ‘I don’t have it’ and ‘I have it,’” says Davin Saderholm, manager of new product
development at T.D. Williamson.

Endless Possibilities Made Portable
Outside of engineering, 3D modeling is being used in countless creative ways, says Frank Dum, product commercialization manager at T.D. Williamson. Although some uses for 3D printing — like printing your own coffee mugs at home — are just for fun, Dum’s uses are more educational.

“It’s a light bulb-type tool,” says Dum, “when I’m showing a model to an operator and they can actually see what happens inside the pipeline.”

It’s that “light-bulb” effect that makes the technology such a great communication tool, whether you’re an engineer trying to demonstrate the benefits of a product or a teacher trying to explain a complex concept. Hasiuk says 3D printing technology has gone a long way toward making higher education more cost-effective and accessible.  Paleontologists can scan and print bones to complete or reproduce fossils. Students in university-level geosciences classes can upload and print replicas of fossils or models of complex crystal structures.

As this futuristic technology continues to become more commercialized, companies like T.D. Williamson, and users like Dum and Hasiuk, will continue to push for innovative ways to use it.